Today, when the United States and Iran are on the brink of an international conflict, the words of Fidel Castro Ruz have extraordinarily relevance.

The use of nuclear weapons in a new war would mean the end of humanity. This was foreseen by scientist Albert Einstein, who was able to measure their destructive capacity to produce heat of millions of degrees that would vaporize everything within a wide radius of impact. The brilliant researcher was the driving force behind the development of this weapon, before it was available to the genocidal Nazi regime.

All the world’s governments are obliged to respect the right to life of all nations and all peoples on the planet.

Today there is an imminent danger of war with the use of such weapons, and I have no doubt that an attack by the United States and Israel on the Islamic Republic of Iran would inevitably become a global nuclear conflict.

END_OF_DOCUMENT_TOKEN_TO_BE_REPLACED

Vatican City, Dec 25 (P L) A call for peace, justice, reconciliation and mercy, especially with the most vulnerable people, was made by Pope Francis to the world here today for Christmas.
In his traditional message ‘Urbi et Orbe’ (From the City to the World), the Supreme Pontiff affirmed that ‘the light of Christ’ prevails over the darkness existing ‘in human hearts’, ‘in personal, family and social relationships’ and ‘in economic, geopolitical and ecological conflicts’.

In this sense, he asked that this light touch ‘so many children who suffer from war and conflicts in the Middle East and in various countries of the world’ and that ‘the little Child of Bethlehem’ be a hope for the entire American continent, ‘where various nations are going through a period of social and political upheaval.

May it revive – he specified – the beloved Venezuelan people, long tried by political and social tensions, and not fail to receive the help it needs.

END_OF_DOCUMENT_TOKEN_TO_BE_REPLACED

Havana, Dec 26 (P L) Latin America is undergoing a process of re-impoverishment resulting not only from economic factors, but also from social policy cuts, asserted Frei Betto in an article published on the Cubadebate website.
According to the Brazilian intellectual, author of about 60 books on various topics, this reality is especially notable in countries where parliamentary coups have occurred, such as Honduras, Paraguay and Brazil, and in those that in recent years have been governed by neoliberal presidents, such as Argentina and Chile.

The continent, with 638 million inhabitants, is today the most unequal region in the world. After a decade of reducing poverty and inequality, the rates are once again worrying, due to tax evasion and cuts in social programs, he said.

In his article, Betto recalls that in 2002, 44.5 percent of Latin Americans lived in poverty, 11.2 percent in misery, and today 30 percent of the continent’s population — 210 million people — live in poverty and misery.

END_OF_DOCUMENT_TOKEN_TO_BE_REPLACED 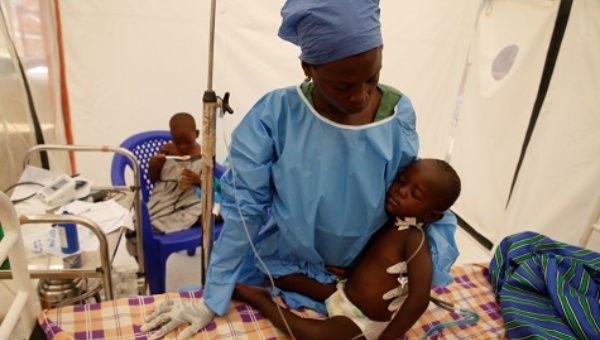 “We are on the edge with this crisis. We keep pulling it back from the brink but it is very dangerous.”

The United Kingdom’s (U.K.) international development secretary, Rory Stewart, has called to declare Ebola outbreak in the Democratic Republic of the Congo (DRC) an emergency, after a two-day visit to the emergency health centers for Ebola virus victims in the northeastern cities of Butembo and Beni.

Political Games Hinder Efforts to End Ebola in Congo: WHO

“We are on the edge with this crisis. We keep pulling it back from the brink but it is very dangerous. The very worst-case scenario is if it broke out of the numbers that you could vaccinate. Due to the insecurity, areas that appeared cleared of the disease, such as Beni, have seen the population struck again,” warned Stewart in an interview with The Guardian.

Ebola virus disease has so far affected 2,400 people, causing more than 1,600 deaths, according to the World Health Organization (WHO).

Stewart said that the situation in DRC is “heartbreaking” and that the pandemic must be addressed as a public health emergency mainly because it is spreading very quickly.  The WHO has refused to declare it a global health emergency.

The U.K.’s international development secretary also said that countries with links to the DRC must contribute with more financial assistance. European countries are giving “too little”. France, for instance, has provided as little as US$ 1 million.

“We are critically short of money,” he said, insisting that “there is going to be a funding gap of US$100 million, and probably of US$ 300 million through to December because we have to stay on top of this. It is a very expensive response because the local systems are simply not there. We cannot move from one area to another and say it is solved. It keeps coming out of the periphery again and jumping 300 km north. The money is central.”

Additionally, he said that the critical issue is the way people deal with the crisis, as 30 percent of them are terrified at the idea to get vaccinated and more alarming, they do not trust medical teams. As well as violence in the African nation.

Healthcare workers were seen preparing sandbags in a clinic to shield themselves in the case of militias shooting at them.

END_OF_DOCUMENT_TOKEN_TO_BE_REPLACED

Beijing, Jul  (P L) Since the triumph of the communist revolution that transformed China from a semi-feudal society into a world power, economy has grown annually at an average rate of 8.1 percent, official sources reported.

China’s economy has accelerated considerably over the past 70 years, with Gross Domestic Product (GDP) rising at an average rate of 8.1 percent each year, the National Bureau of Statistics reported.

According to a statement from that institution, after seven decades of transformations, China’s GDP hit 90 trillion yuan (about US$13.14 trillion) in 2018, accounting for 16 percent of global finance.

According to the statistics office, these figures are a huge contrast to China’s economy in the early years of the people’s revolution, when its GDP was 67.9 billion yuan.

END_OF_DOCUMENT_TOKEN_TO_BE_REPLACED 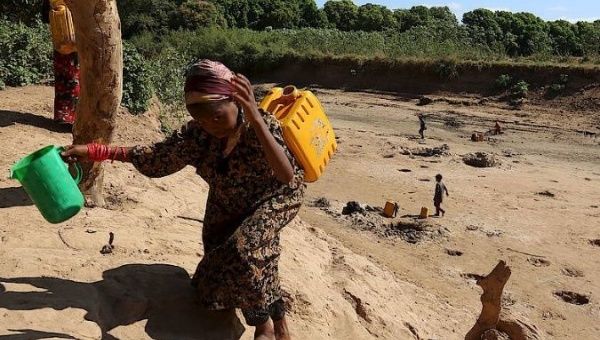 The report warns that extreme temperatures in many regions will cause food insecurity, lost incomes, and worse health for millions.

Climate change will have the greatest impact on those living in poverty, as the wealthy will afford to escape overheating, hunger and conflict while the rest of the world is left to suffer, according to a United Nations (U.N.) report.

“Perversely, while people in poverty are responsible for just a fraction of global emissions, they will bear the brunt of climate change and have the least capacity to protect themselves,” U.N. Special Rapporteur on extreme poverty and human rights, Philip Alston, said in a report released Tuesday.

As the effects of global warming begin to take its irreversible toll on certain parts of the world, the report warns that extreme temperatures in many regions will cause food insecurity, lost incomes and worse health for millions, resulting in many opting between starvation and migration.

In 2018 a report for the World Bank, the first to model migration due to climate change on a large scale, estimated that as many as 143 million people in sub-Saharan Africa, South Asia and Latin America could become climate refugees by 2050.

“We risk a ‘climate apartheid’ scenario … climate change threatens to undo the last 50 years of progress in development, global health and poverty reduction,” Alston warned, adding that “it could push more than 120 million more people into poverty by 2030.”

END_OF_DOCUMENT_TOKEN_TO_BE_REPLACED

The U.S. State Department has announced that anyone requesting a visa to travel to the country must submit their social media profiles, email addresses, and telephone numbers used in the last five years.

Are you thinking about traveling to the United States at some point? Well, you better think twice when expressing yourself on the Internet, posting, sharing, or giving a “like” on social media, sending an email or a WhatsApp message.

The U.S. State Department has announced that, beginning in June, anyone requesting a visa must submit their social media profiles, their email addresses, and telephone numbers they have used in the last five years. Obviously, passwords are not requested, since the government doesn’t need them, having free, back door access to the servers of the U.S. companies involved.

So, if you’re thinking about traveling to the U.S. – wherever you live, wherever you were born, whatever you think, you are obliged to hand over the U.S. government everything you have done and said on the Internet in the last five years. Of course, this information will be processed by powerful computers with algorithms to determine not only if you are likely to throw a Molotov cocktail at the White House, but to know all about your family history, friends, and personal life.

But there’s more! What’s worse is that a good portion of the planet’s inhabitants are going to think twice about expressing themselves. At least those among the 4.4 billion who use the Internet, who are in fact those who tend to travel, vote in elections, make purchases and socialize online. Those thinking about entering U.S. territory are going to consider limiting their political expression on the Internet, and some, millions, may be tempted to forego criticism and concentrate on praise.

Political expression in general is not being limited, but rather any type that may irritate the government issuing visas; the government whose policies are in fact the most universally denounced; the government of the country which with its economic power and extraordinarily influential cultural industry attracts the most immigrants and visitors.

It is a shame that an ideal space for the exchange of knowledge, for political participation as equals, for the facilitation of economic transactions and social interaction, could become history’s most far reaching instrument of censure, given its increasing concentration in few hands. END_OF_DOCUMENT_TOKEN_TO_BE_REPLACED

US worrisome position was the main issue discussed during the recently concluded G20 meeting in Fukuoka. According to experts, tariffs, protectionist policies and other ills initiated by the Donald TrumpÂ´s administration not only covers his confrontation with Beijing, but also extends to the rest of the world.

Hence, the finance ministers and those responsible for the central banks of the G20 admitted that commercial tensions have worsened.Thus, such worsening poses a menace to global economy.

END_OF_DOCUMENT_TOKEN_TO_BE_REPLACED

Washington recently slandered North Korea in the letter of the so-called ‘2019 India-Pacific Strategic Report’, and it is a declaration of confrontation, according to an unidentified spokesperson for the Disarmament and Peace Institute of the Foreign Ministry of the DPRK.

END_OF_DOCUMENT_TOKEN_TO_BE_REPLACED

Be it fundamentalist groups as in Iraq, or the wars and sanctions applied by the U.S. government against countries such as Venezuela, the killer is the same: terrorism.

VENEZUELAN boy, Geovanny, and Iraqi, Qasim, never met. The first, aged just six, died when his heart stopped while waiting for a bone marrow transplant to be undertaken in an Italian hospital, through an agreement with the Venezuelan state-owned oil company, PDVSA. Donald Trump’s sanctions against Venezuela, affecting the Bolivarian nation’s accounts in European banks, resulted in the cancellation of the program, and Geovanny’s death.

Meanwhile, Qasim Al-Kazim’s dream of being a footballer was cut short when he lost one of his legs to a terrorist attack by the Islamic State. However, he survived and enjoyed the ultimate thrill when he was taken to Moscow, where he inaugurated, with the first kick of the ball, a soccer match between Russian teams Spartak and Ufa.

These are two examples of victims of the same killer: terrorism. Be it fundamentalist groups as in Iraq, or the wars and sanctions applied by the U.S. government, which should be judged as state terrorism.

Knowing that hundreds of thousands of children are affected every day by the wars or economic sanctions imposed by Washington against countries whose governments are not compatible with the model it wants to implement, is perhaps the most moving result of the latest actions by those who govern in the White House.