Communist politicians in Kerala have a long history of creating alternatives that push back against the narrative that capitalism is the only option.

It was a time of “titanic struggle against world fascism,” writes Elamkulam Manakkal Sankaran Namboodiripad 35 years after he overcome the odds to become the governor of one of the first states in the non-communist world to elect a communist government.

The year was 1957. World War II had ended, India had won independence from British colonial rule and the country had been partitioned to create the state of Pakistan.

Among the palm-lined beaches, backwaters and canals of India’s southwestern state of Kerala, there was a fomenting movement against imperialism, capitalism and racist parochialism led by the Communist Party of India.

With Namboodiripad as its leader, the CPI, in a historic precedent, went on to win the state’s very first election.

But just two years later it would be illegally overthrown by the Indian National Congress, which sought to rollback CPI’s efforts in a vigorous push to the right.

The communist movement that pioneered radical land and educational reforms in Kerala early on — pushing the state to outrank the rest of the country on a number of fronts — has in the last five decades shown no signs of paling.

With the CPI (Marxist) — an offshoot of the original CPI — in power since May 2016, their Left Democratic Front government, a coalition of various communist and socialist groups in the state, has achieved a number of victories in the past year that peg the small, southwestern state miles ahead of the rest of Modi-governed India.

“The Communist movement in Kerala has grown in a land that had been prepared for it by the social reform movements that preceded it,” the Chief Minister of Kerala, Pinarayi Vijayan, told teleSUR by email.

“If reformers … were the torch bearers of renaissance in Kerala, (then) Communist leaders … were instrumental in translating their vision for our society into political action,” he added. “Even now, the left in the state is closely aligned with all such movements that profess and practice progressive ideas, standing by the oppressed, marginalized and disadvantaged.”

The history of left governments in Kerala has forged the way for the “Kerala Model” of development to the world — a people’s alternative to the rising forces of globalization.

Michael Parenti, in his 1997 book “Blackshirts and Reds: Rational Fascism and the Overthrow of Communism”, wrote:

“Consider Kerala, a state in India where the actions of popular organizations and mass movements have won important victories over the last forty years against politico-economic oppression, generating a level of social development considerably better than that found in most of the Third World, and accomplished without outside investment.

Though Kerala has no special sources of wealth, it has had decades of communist organizing and political struggle that reached and moved large numbers of people and breathed life into the state’s democracy.”

For 28-year-old Asif Ahamed, who lives in the state, Kerala’s communist party is easily the answer in a country governed by the whims of “ethno-nationalist fascism.”

“They have stuck by the people ever since, contrary to the corporate government that have been in power in Delhi. In the end it’s an extremely easy choice to choose the Communist party in Kerala over any other in the country,” he told teleSUR. 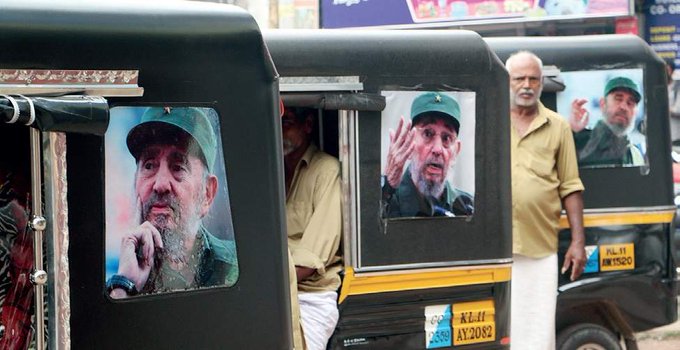 Thats kerala for you.
Communist

He agrees that the longstanding history of communist movements has helped the state to soar ahead.

“Kerala over the years has always been a step ahead of other states. This is largely thanks to the massive presence of the revolutionary and the spiritual movements in the state since the early decades of 20th century,” he pressed.

Born in the struggle against revisionism and sectarianism in the international communist movement in order to “defend the tenets of Marxism-Leninism,” according to Vijayan, the CPI (M)’s governance has pushed Kerala to have India’s highest literacy late at 93.9 percent, highest life expectancy rate at 77 years and therefore its best Human Development Index score at 0.712 in 2015.

Since its LDF coalition government took office on May 25, 2016, lawmakers have also put in place a number of progressive policies that tackle issues ranging from racism to labor rights to gender equality.

Meanwhile, in a country still battling deep-seated discrimination against those deemed lower caste, “Kerala had eradicated untouchability and casteism long before India’s independence,” explained Ahamed. In the past year, Kerala’s government has conducted some 6,000 “I have no caste” campaigns across the state.

The population, known as Scheduled Castes and Scheduled Tribes in the country, have also been allocated the biggest set of funds in the state’s budget for 2017.

Feminist initiatives have also soared under the LDF’s governance. This month it became the first state in the country to install sanitary napkin vending machines in all its schools under its “She Pad” scheme, providing access to menstrual hygiene products to every young woman.