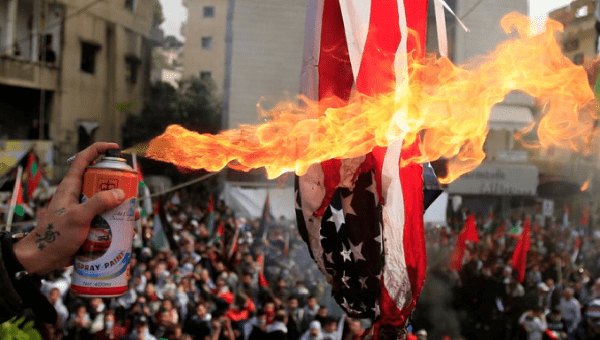 Trump’s recent decision to declare Jerusalem as Israel’s capital has united people fighting for the rights of Palestinians world over, spurring protests in countries, Malaysia, Indonesia, Bangladesh, Pakistan, and China who have all joined in the condemnation.

END_OF_DOCUMENT_TOKEN_TO_BE_REPLACED

While the U.S. threatened economic and military action against the DPRK, China called on all to “exercise restraint” and avoid “belligerant rhetoric.”

The United States is threatening to use its “considerable military forces”against the Democratic People’s Republic of North Korea, U.S. Ambassador to the United Nations Nikki Haley said at the U.N. Security Council on Wednesday.

The security council session convened to discuss the international response to the DPRK’s launch of a successful ballistic missile test earlier this week, which Haley said “shows that North Korea does not want to be part of a peaceful world.”

Speaking at the session, Haley said that the DPRK’s “actions are quickly closing off the possibility of a diplomatic solution. The United States is prepared to use the full range of our capabilities to defend ourselves and our allies. One of our capabilities lies with our considerable military forces. We will use them if we must.”

END_OF_DOCUMENT_TOKEN_TO_BE_REPLACED

The leaders discussed efforts to align their economic strategies, as well as “progress toward a multi-polar world” with “greater democracy in international relations.”

Chinese-Russian relations and strategic cooperation is the best it has been in history, Chinese President Xi Jinping said during his official state visit to Russia this week.

Both leaders emphasized support for each other’s economic and political interests, agreeing to work on aligning strategies both economically and geopolitically, forging unity between the China-led Belt and Road initiative, and the Russian Eurasian Economic Union.

“Our two sides are working hard to align our development strategies. President Putin and I have reached an important agreement to strengthen the complementarity of the Belt and Road Initiative and the Eurasian Economic Union. Bilateral cooperation in energy, trade, investment, high-tech, finance, infrastructure and agriculture is growing rapidly and increasingly geared toward modernization and innovation in science and technology,” President Xi said.

“One needs good partners to walk with, and good neighbors to live with,” Xi noted in a speech when he arrived in Russia.

END_OF_DOCUMENT_TOKEN_TO_BE_REPLACED

Kim Jong-un said, “we should send them (Unites States) gifts once in a while to help break their boredom.”

South Korean and U.S. military forces launched short-range ballistic missiles from the peninsula into the Sea of Japan.

According to the South’s Joint Chiefs of Staff, both weapons from the exercise homed in on their target “displaying the capability of a precision strike against the enemy headquarters in times of emergency.”

The joint military exercise was in response to the North’s ICBM test being described by President Kim Jong-un as a gift to the “American bastards.”

Korean Central News Agency (KCNA) highlighted that the missile had a carbon composite nose cone that could survive the harsh conditions of “heat reaching thousands of degrees centigrade” to “accurately hit the target.”

END_OF_DOCUMENT_TOKEN_TO_BE_REPLACED

Beijing, Jun 23 (P L) Cuban Minister for Foreign Trade and Foreign Investment, Rodrigo Malmierca, and his Chinese peer, Zhong Shan, have reaffirmed today in this capital the desire to strengthen bilateral ties in the economic and trade area between the two nations.

Delegations of the two countries met at the headquarters of the Ministry of Commerce to celebrate the 29th session of the Cuba-China Intergovernmental Commission for Economic and Trade Relations, where they reviewed the several fields of cooperation, as well as the challenges throughout the process of collaboration.

Zhong stressed the constant strength and mutual trust in the policies and the economic-trade relations existing between the two states, as well as the development of the common interests in the ties of cooperation.

END_OF_DOCUMENT_TOKEN_TO_BE_REPLACED

“The North Korean problem is the international community’s top priority. In order to deter them, we will take concrete action with the United States.”

The latest test involved a short-range Scud which flew about 450km before landing in the Sea of Japan (East Sea) between the Korean Peninsula and Japan on Monday, according to the U.S. Pacific Command. This is the third test in as many weeks, and the 12th this year.

END_OF_DOCUMENT_TOKEN_TO_BE_REPLACED

The host country also expressed satisfaction after receiving the Cuban delegation, recognizing that it always carries a message of friendship and solidarity with this country.

Balaguer conveyed to his peer a greeting from the first secretary of the Communist Party (PCC) and President of Cuba, Raul Castro.

He also stressed the importance of the theoretical seminar between both organizations concluded today, for the construction of a socialist society in each nation.

He also recalled that the Central Committee plenary session had adopted in recent days some key documents that were discussed during the Seventh PCC Congress.

These talks were part of a program that started on Monday, May 22nd, which included meetings with leaders of the Communist Party of Vietnam (PCV) in which they exchanged work experiences.

END_OF_DOCUMENT_TOKEN_TO_BE_REPLACED

China has long expressed its dissatisfaction with the U.S.’ use of the sanctions weapon, which frequently affects Chinese individuals and companies allegedly linked to weapons or nuclear development in Iran or the Democratic People’s Republic of Korea.

END_OF_DOCUMENT_TOKEN_TO_BE_REPLACED

“The U.S. House of Representatives should think twice.”

In a rare move, North Korea’s parliament sent a letter of protest to the U.S. House of Representatives on Friday over its new package of tougher sanctions.

The Foreign Affairs Committee of North Korea’s Supreme People’s Assembly condemned the sanctions as “the most heinous act against humanity” in the letter, according to a copy published by the KCNA news agency.