Quito, Nov 18 (P L) Rosa Mireya Cardenas, representative from Ecuador to the Andean Parliament, thanked Cuba and its health professionals on Monday for their solidarity and support in this South American nation, and in the rest of the world.

‘Cuba is a nation that has gone beyond time, beyond all its possibilities, and has dedicated all its solidarity to all nations around the world,’ Cardenas told Prensa Latina, following the Lenin Moreno administration’s decision to end the health cooperation agreement with Cuba. END_OF_DOCUMENT_TOKEN_TO_BE_REPLACED

ECUADOR, The ”Eloy Alfaro” Plurinational Association of Ecuadorian Students and Graduates in Cuba demanded on Tuesday, from this South American country, the end of the U.S. economic, financial and commercial blockade against the Caribbean nation.

In a statement issued by the agency, to which Prensa Latina had access, the group recalled that since January 1, 1959, under the leadership of Commander Fidel Castro, Cuba started a revolutionary process and faced the capitalism of the northern state, which threatens human existence.

According to the Association, it is unforgivable for Washington that a small country, located in front of the largest empire, should achieve standards in health, education, nutrition and social justice.

END_OF_DOCUMENT_TOKEN_TO_BE_REPLACED 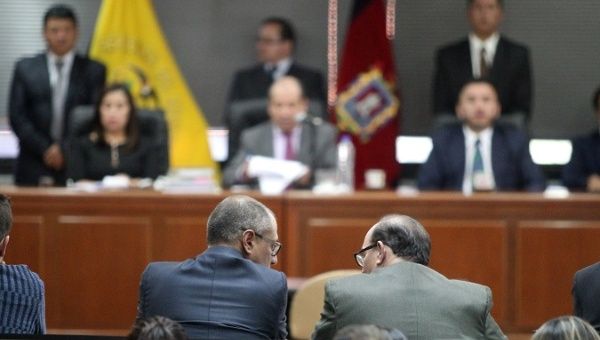 Glas detractors are urging the National Assembly to give way to a request by right-wing CREO legislators to initiate an impeachment process against Glas.

After the National Court sentenced suspended Ecuadorean VP to 6 years in prison, Rafael Correa affirmed via Twitter that “they” have succeeded in their objective to take over the Vice Presidency.

END_OF_DOCUMENT_TOKEN_TO_BE_REPLACED

Following this week’s 47 General Assembly of the Organization of American States in Cancun, the Foreign Minister of Ecuador, Maria Fernanda Espinosa, expressed disappointment in the ability of the OAS to effectively address the needs of the people, and said that it should undergo a process of reinvention and re-engineering.

RELATED:
At OAS Meeting, Attacks and Support Continue for Venezuela

The remarks come after the OAS meeting largely centered around the ongoing internal situation of Venezuela at the urging of Mexico, who was hosting the meeting.

Following the meeting, which she described as mono-thematically revolving around Venezuela, she said that the body should fulfill its duty to prioritize the issues facing the hemisphere.

“No diplomatic work makes sense if it is not in harmony with the demands of the societies we represent,” she said.

The official expressed frustration that Ecuador had brough forth multiple relevent and pressing agenda points, such as the fight against poverty and inequality, the successful migratory model of Ecuador, climate change, and natural disaster preparedness.

Unfortunately however, none of the topics were addressed, as Venezuela’s internal matters permeated the entire agenda for the week.

She noted the diplomatic deadlock that occurred on the matter, with those states who maintain that sovereignty should be respected and a principle of non-interference adhered to by the organization, countering those who believe the Venezuelan crisis should be made a unilateral issue.

END_OF_DOCUMENT_TOKEN_TO_BE_REPLACED

Ecuador’s incumbent president denounced the strategies of the right-wing in Venezuela, reproduced in Ecuador during the electoral campaign.

Ecuadorean President Rafael Correa said Tuesday that he hoped the conflict between the Venezuelan government and the opposition will be solved through dialogue and democracy.

END_OF_DOCUMENT_TOKEN_TO_BE_REPLACED

Ecuador, Rafael Correa-America is one.

Before Rafael Correa‘s presidency, Ecuador faced political and economic instability. Under Correa, extreme poverty was eliminated by 47%, between 2006 and 2016, the GDP shot up from 4.3% to 8.6%. #EcuadorDecide

END_OF_DOCUMENT_TOKEN_TO_BE_REPLACED

If the referendum passes, all public servants and elected officials in Ecuador will be barred from holding wealth in offshore accounts.