Moscow, Jul 10 (P L) Foreign Minister Sergey Lavrov said on Friday that Russia will guarantee its security, even if the United States rules out a possible renovation of the Start-3 Treaty on nuclear weapons.

‘We are absolutely certain that we will guarantee our security, even without the treaty,’ the Russian foreign minister said in a videoconference on the treaty, which will expire in February 2021.

The Start-3 Treaty is the only agreement that links the United States and Russia since August 2, 2019, when Washington withdrew from the Intermediate-Range Nuclear Forces Treaty (INF), signed in 2010.

In late June, Russia and the United States met in Vienna to discuss the possibilities of extending the Start-3 Treaty, signed ten years ago, for at least five years, in order to limit the two powers’ arsenals.

According to Sputnik news agency, Lavrov underlined that Russia is prepared for any scenario due to the possible US withdrawal from the treaty.

END_OF_DOCUMENT_TOKEN_TO_BE_REPLACED

Moscow, Jul 3 (P L) President Vladimir Putin today signed a decree to implement the
constitutional reform package starting tomorrow, backed in a recent referendum by 77.92 percent of participating voters.
Putin’s provision indicates that the 1993 Constitution, renewed with dozens of modifications, must be officially published this Saturday, after its approval in a plebiscite, attended by 67.97 percent of the more than 108 million 648 thousand registered voters. .

In the popular consultation, which ran from June 25 to July 1, considered the main day of voting, about 58 million of the participants at the polls supported the changes and about 16 million voted against, that is, 21.27 percent.

Of the 85 Russian regions, only in the Nenetsk Autonomous District the population did not vote overwhelmingly in favor of the reforms.

The authorities explain that the little more than 44 thousand inhabitants of that northern territory were able to exercise a protest vote to show their opposition to the unification plans with the adjoining Arjanguelsk province, both near the Arctic Circle.

But the support of almost 78 percent to Putin’s proposal to bring to referendum the amendments to the Magna Carta, 11 of which the president outlined last January before the two chambers of the Federal Assembly, is considered an approval to the management of that statesman.

Putin himself thanked yesterday the vote of confidence of the citizens to the management of the state, which had to do, in the opinion of analysts, with the urgent measures applied by the Government to face the Covid-19 pandemic and reduce its damage economic.

END_OF_DOCUMENT_TOKEN_TO_BE_REPLACED

Moscow, Jun 11 (P L) Russian President Vladimir Putin holds 66.6% of support by Russian citizens, while Prime Minister Mikhail Mishustin’s popularity reaches 50.8%, according to the poll on Monday.
In addition, Vladimir Zhirinovsky, leader of the Liberal-Democratic Party, has 32.1% in the aforementioned parameter, according to the survey carried out by the All-Russia Center for Public Opinion Studies and the Sputnik agency.

30.4% of more than 11,000 interviewed expressed their confidence in the top leader of the Communist Party of the Russian Federation, Guennady Zyuganov, and 27 in that of Just Russia, Sergei Mironov.

At the same time, 61.2% of those questioned approved Vladimir Putin, who held meetings, first directly and then by videoconference, almost permanently with the government and governors to fight the Covid-19 pandemic.

END_OF_DOCUMENT_TOKEN_TO_BE_REPLACED

Moscow, Apr 8 (P L) Russian President Vladimir Putin today announced additional payments for medical personnel directly involved in working with patients with the SARS CoV-2 coronavirus, which caused the Covid-19 pandemic.
After acknowledging that the next two or three weeks could be decisive in the fight against Covid-19, Putin indicated that the doctors will receive 80 000 rubles ($1,058) for the nurses 50 000 rubles ($661), and the auxiliary personnel 25 000 ($330).

In addition, the head of state said that an additional payment of 50,000 rubles ($661) and a minimum of 25,000 rubles ($330) would be considered for medical personnel in ambulances. These are people who are leading the battle against Covid-19, he said.

The addition to the regular salaries of the aforementioned professionals will be maintained for three months, including April, he said.

Putin also advised organizing an insurance system for medical personnel, as is done so far for members of the armed forces, by holding video-conference meetings with Government members and the leaders of all administrative divisions.
END_OF_DOCUMENT_TOKEN_TO_BE_REPLACED 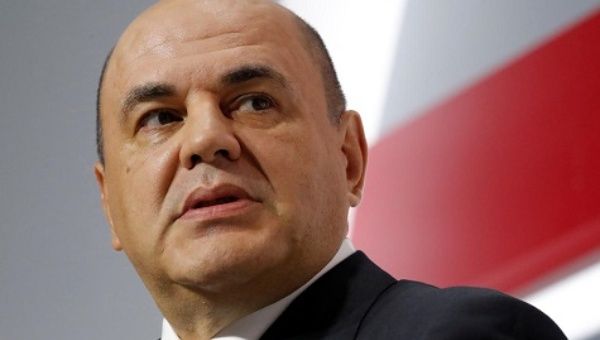 Officials in the government describe the new PM as an effective administrator who has a very good knowledge of the economy.

Merkel and Putin: Iran Nuclear Deal Must Be Preserved by All Means

On Wednesday, Putin had proposed Mishustin, a little-known technocrat and chief of the Russian Federal Tax Service, for the position of Russia’s PM.

The nomination came hours after the current Prime Minister Dmitry Medvedev resigned along with the whole Cabinet following the president’s proposals to amend the Constitution.

Mishustin, 53, is a trained engineer who also holds a Ph.D. in economics. He was the head in the 1990s of the board of the International Computer Club (ICC), a public non-profit organization which according to Russia’s news agency TASS, aimed to attract “advanced western information technologies to Russia.”

In 1998, he joined the state service, working in several government agencies, before becoming in 2008 the president of the Russian investment company (UFG).

In 2010, Mishustin was appointed director of the Russian Federal Tax Service. In this position, he declared war on “dirty data” and gained wide recognition as a result of his deep improvement and digitalization of the Tax Service, turning it into a modern and efficient institution. His management led to a drop in tax evasion and brought many small businesses into the formal economy.

Last year, Mishustin said in an interview that Russia needed to adopt artificial intelligence and digital technology, saying “if we don’t understand how this world is developing and what its rules are, if we insist our country is part of the old order, this new world will make us its victim.”

Over the years, Mishustin “has created a cutting-edge tax service from the ground up, using modern technologies and (means of) digital economy,” said the Speaker of Russia’s Duma Vyacheslav Volodin.

Officials in the government and businessmen describe him as a professional and competent administrator who has a very good knowledge of the economy, which makes him a good fit for the Cabinet in a time when Russia’s economy is not at its best.

END_OF_DOCUMENT_TOKEN_TO_BE_REPLACED

Moscow, Jan 15 (P L) Russian President Vladimir Putin on Wednesday focused his annual state-of-the-nation address before Russia’s two-chamber parliament (Federal Assembly) on internal socio-economic aspects such as demography, health and education, while considering proposed amendments to the Constitution.
During his speech at the Manege Central Exhibition Hall, Vladimir Putin noted that it was necessary to prepare for demographic problems in the near future.

To do so, the Russian president proposed greater support for parents, including guaranteed enrollment in kindergartens, and decent incomes for families below the poverty line.

END_OF_DOCUMENT_TOKEN_TO_BE_REPLACED

#Cuba, #Cuba and Russia a relationship that survives time, #Russia and Cuba., Russia

Before returning to the Cuba, President Díaz-Canel met with His Holiness Kirill, Patriarch of Moscow and all of Russia, a fitting culmination to his tour of European countries.

MOSCOW, Russia.— Shortly before leaving for Havana on a morning of fine snow, the President of the Republic of Cuba, Miguel Díaz-Canel Bermúdez, met with His Holiness Kirill, Patriarch of Moscow and all of Russia. “We’re heading back,” he said in a warm greeting, “but could not leave the city without first visiting you.”

After touring the impressive Cathedral of Christ the Savior, one of the largest in the world, Díaz-Canel arrived at Danilov Monastery, the Patriarch’s residence, where Kirill greeted him warmly. END_OF_DOCUMENT_TOKEN_TO_BE_REPLACED

Moscow, Oct 29 (PL) Russian President Vladimir Putin said today he gladly accepts the invitation to visit Cuba, when he met his fellow Caribbean peer, Miguel Díaz-Canel, at the Novoe Ogoriovo residence, in the outskirts of this capital.
Putin congratulated Díaz-Canel for his election as president of Cuba. ‘Last year you made an official visit to this country, but now you do it for the first time as head of state of the Republic of Cuba, as provided by the new Constitution,’ he said.

END_OF_DOCUMENT_TOKEN_TO_BE_REPLACED

Saint Petersburg, Russia, Oct 28 (P L) Cuban President Miguel Diaz-Canel Bermudez met on Monday with the top leader of the Legislative Assembly of Saint Petersburg, Viacheslav Makarov, who repeated his country’s condemnation of the US blockade of the Caribbean island.
Makarov highlighted the Russian’s affection for the Cuban people and called to make emphasis on bequeathing that mutual love between the two peoples to the youngest generations.

For us, Cuba will always be the island of liberty, Makarov noted.

END_OF_DOCUMENT_TOKEN_TO_BE_REPLACED

Moscow, May 6 (Prensa Latina) Russia has made clear it supports the legitimate and constitutional government of President Nicolas Maduro after the failed US-backed coup attempt of April 30.
After meeting on Sunday in Moscow with his Venezuelan peer, Jorge Arreaza, Russian Foreign Minister Sergei Lavrov underscored Moscow’s support for Maduro administration ‘principled, consistent and firm’.

‘We now see an unprecedented campaign, led by the United States, to overthrow the legitimate authorities of Venezuela. We condemn this campaign for violating the principles of international law,’ Lavrov stressed.

Lavrov further said Russia never meddles in the domestic affairs of other states, ‘and we urge all others to act precisely like this’, he added.

Attempts at a forced change of power in Venezuela undermine the crisis settlement process and carry a risk of catastrophe, the Russian minister warned.