# The Cuban Revolution’s, #Cuba, #We are Continuity, Fidel., United States

Havana, June 2 (P L) Cuban President Miguel Diaz-Canel on Tuesday ratified the thought of the historical leader of the Cuban Revolution, Fidel Castro, that Cuba defends peace and is willing to a dialogue, but without conditions .

On Twitter, the Cuban president posted, ‘Cuba is not the enemy of peace or reluctant to exchange or cooperation between countries of different political systems, but has been and will be intransigent in defense of its principles.’

With the hashtag #SomosContinuidad, Diaz-Canel´s tweet alluded to a phrase ‘The Trojan Horse,’ through which Fidel Castro reflected the strong political battle of June 2, 2009, in the Organization of American States (OAS).

At that time, several Latin American rulers called for removing the suspension of Cuba from OAS, in force since 1962, which was approved.

END_OF_DOCUMENT_TOKEN_TO_BE_REPLACED

Santiago de Cuba, Jan  (P L) Although these days the proximity of the 167th anniversary of his birth on Tuesday 28 makes his presence more real than ever, José Martí is in this city not only the mystery that accompanies us.

Beyond that poetic definition of José Lezama Lima, the Apostle of Cuban independence glows here in multiple ways and in unexpected places, from the Mausoleum that keeps its ashes in the patrimonial cemetery of Santa Ifigenia to the humblest neighborhood school.

When the nation vibrates indignantly before the humiliation to the Apostle by vandals in the capital, the city where the lifeless body of the Major General of the Liberation Army arrived on May 27, 1895, after his fall at the hands of Spanish colonialism in Dos Ríos, with utmost reverence for his legacy.

To the privilege of guarding with infinite zeal the mortal remains of the Delegate of the Cuban Revolutionary Party, the people of Santiago also incorporate evidence of the admiration and respect for the most universal of Cubans who can be felt throughout its urban geography.

In the immediate vicinity of the former Moncada Barracks, assaulted by Fidel Castro and young revolutionaries on July 26, 1953 with the sacred idea that his imprint would not die in his centennial, an upright sculpture evokes he who was considered the intellectual author of that epic.
END_OF_DOCUMENT_TOKEN_TO_BE_REPLACED

Today, when the United States and Iran are on the brink of an international conflict, the words of Fidel Castro Ruz have extraordinarily relevance.

The use of nuclear weapons in a new war would mean the end of humanity. This was foreseen by scientist Albert Einstein, who was able to measure their destructive capacity to produce heat of millions of degrees that would vaporize everything within a wide radius of impact. The brilliant researcher was the driving force behind the development of this weapon, before it was available to the genocidal Nazi regime.

All the world’s governments are obliged to respect the right to life of all nations and all peoples on the planet.

Today there is an imminent danger of war with the use of such weapons, and I have no doubt that an attack by the United States and Israel on the Islamic Republic of Iran would inevitably become a global nuclear conflict.

END_OF_DOCUMENT_TOKEN_TO_BE_REPLACED

struParis, Dec 8 (P L) Fidel Castro lives in the January 1, 1959, Revolution and the struggles  for the just causes of the Latin American peoples and the world, the France-based Cuba Linda Association said in Paris on Sunday.
‘Three years after Fidel’s death and despite the vultures who expected that the socialist Revolution would disappear with him, Cuba’s stance remains clear, alongside the peoples for their welfare, sovereignty and self-determination, and denouncing imperialism, its dirty wars and interfering maneuvers,’ Rose-Marie Lou, the association’s political director, told Prensa Latina.

On behalf of the association, founded in 1998 to foster ties between France and Cuba, the activist insisted on the legacy of the historic leader of the Revolution and his inspiring presence in the Cuban people.

END_OF_DOCUMENT_TOKEN_TO_BE_REPLACED

The fact that our commander Fidel has not been physically among us for three long years is striking our hearts and challenging our believe, but at the same time to feel how his long lasting influence and the validity of his thoughts multiply in good women and men, in Cubans teachers and doctors voluntarily prepared to assist wherever are needed, in the firm and irrevocable decision of the Cuban people to defend Cuba dignity and sovereignty continuing with our revolution, shows how Fidel is and will be among us  and have entered in the universal history, through the winners door.

Fidel was the leader of one of the most important revolution ever made, a man who consecrated his life to the humble people in the world, a symbol of the struggle against colonialism, apartheid and imperialism. In the view of the current international trend, where the government of United States of America has developed every time more aggressive and genocide policy against many countries in the American continent, just because they have the firm decision of being independent, the teachings, guide of his thoughts and example are pivotal to follow.

END_OF_DOCUMENT_TOKEN_TO_BE_REPLACED

Buenos Aires, Nov 26 (Prensa Latina) With the example and thought of Fidel Castro as a guide to confront the turbulent times in Latin America, Argentines and Cubans on Monday exalted the outstanding leader of the Cuban Revolution in an emotional evening.

Three years after his physical departure, patriotism, solidarity and internationalism but above all Fidel’s humanism and infinite love for his people, they were highlighted in a tribute where the culture of both countries felt like a breath of hope from this south side.

The beautiful Rome theater of the Buenos Aires town of Avellaneda, hosted the cultural evening in honor of Fidel, who marked a before and after in the history of Latin America and became one of the greatest leaders of the twentieth and twenty-first century.

‘Fidel was his people, he felt it, that closeness was what made our Revolution endure all these years, there is no generation that has not been marked by his thought,’ the Cuban ambassador to Argentina, Orestes Pérez, who recalled the close relationship of the revolutionary leader with his countrymen.

The diplomat recalled Fidel as friend, the Latin American and humanist after pointing out that he is still alive in every Cuban, in every Argentinean who believes in the work of the Revolution, in every fighter in Latin America.

Perez said that in these times the region is going through, with a coup d’etat in Bolivia and the complex scenarios ahead ‘all our peoples must continue thinking about that optimism that always characterized Fidel’ and urged him to continue his legacy and example.

END_OF_DOCUMENT_TOKEN_TO_BE_REPLACED

Our America is living intense days, but there is no reason, or time, to be discouraged. The continent’s peoples have opened the great avenues of their emancipation, and imperialism cannot close them

Our America is living intense days, but there is no reason, or time, to be discouraged. The continent’s peoples have opened the great avenues of their emancipation, and imperialism cannot close them. Bolívar, Martí, Sandino, pointed the way to unity. “How long will we remain in lethargy?” Fidel asked in 1959, during his visit to Caracas. “How long will we be defenseless pieces of a continent, which its liberator conceived as something more dignified, greater? How long will Latin Americans live in this miserly, ridiculous atmosphere? How long will we remain divided?”

END_OF_DOCUMENT_TOKEN_TO_BE_REPLACED 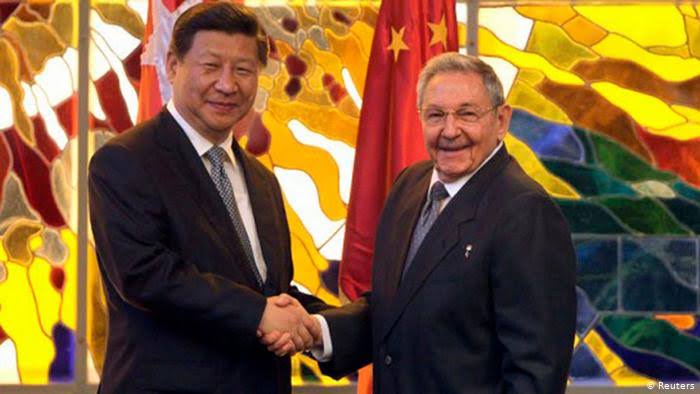 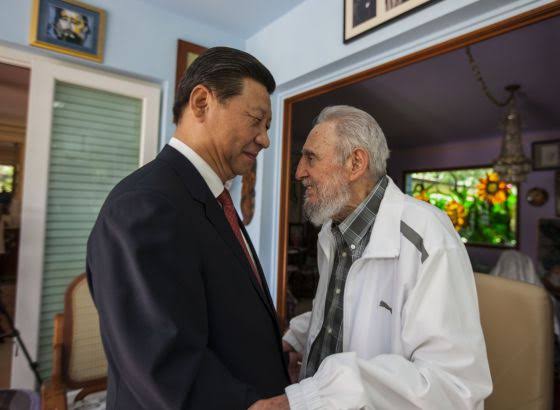 Beijing, Nov 25 (P ) China and Cuba reaffirmed on Monday their united efforts to face unilateralism, hegemony and pressures arising from the trade war and the blockade imposed in both cases by the United States.
In an event to mark the beginning of his mission here, Cuban Ambassador Carlos Miguel Pereira emphasized that the trade war, Washington’s commitment to advance its doctrine of the ‘Chinese threat’ and to maintain the economic, commercial and financial blockade against Cuba, confirm the common battle of both nations for their self-determination.

‘Cuba and China are today more united than ever in the defense of their national interests and respective truths, of sovereignty and independence, and also of adhering to socialism as the only way to build a society marked by progress and social justice,’ he said.

The diplomat expressed satisfaction with what has been achieved, but noted the future work to materialize the consensus reached at the highest level and the effective participation of China and its companies in the socio-economic development plans of the island.

Cuba seeks to grow and develop on more efficient and secure bases, always preserving its social conquests, despite the tightened blockade and an adverse context at the regional and international levels, the diplomat stressed.

END_OF_DOCUMENT_TOKEN_TO_BE_REPLACED 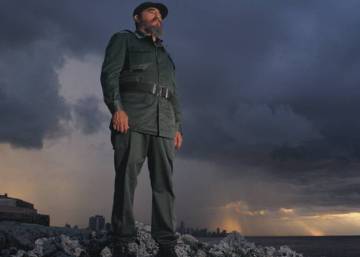 Fidel points out that the United States, the most powerful imperialist country that has ever existed, deludes itself when it claims as doctrine the Universal Declaration of Human Rights.

Enormous ignorance surrounds not only this experience, but innumerable types of experiences. Even the fingerprints of identical twins, born from the same ovule, become different over the years. For good reason, the United States, the most powerful imperialist country that has ever existed, deludes itself when it claims as doctrine a paragraph from the Universal Declaration of Human Rights, “All human beings are born free and equal in dignity and rights. They are endowed with reason and conscience and should act towards one another in a spirit of brotherhood.”

None of this can be ignored. There are many more qualities in religious principles than there are in those which are purely political, despite the fact that these refer to material ideas and the physics of life. Likewise, many of the most inspired works of art were born of the hands of religious persons, a phenomenon of universal character.

Men of science today occupy a prestigious position in centers of investigation, laboratories; in the production of medicines to support human health; in overcoming distances; concentrating energy; perfecting research equipment that can operate on land and in space. Someone must be able to explain how a star – whose light took 12 billion light years to arrive – can be seen from an observatory 5,000 meters above sea level. An incredible gold medal! How can this be explained when references are made to the fusion of stars that according to eminent scientists gave rise to the Big Bang theory.

And what would be left afterwards? No one could, however, deny the statements of eminent scientists who, after decades of rigorous study, reached the conclusion that such phenomenon are absolutely possible. Another fact of notable importance is that the possibility of these phenomena is absolutely real. END_OF_DOCUMENT_TOKEN_TO_BE_REPLACED

Cuban President attends anniversary celebration at the Latin American School of Medicine, devoted to solidarity among the world’s peoples

Cuba’s President, Miguel Díaz-Canel Bermúdez, presided the 20th anniversary celebration of the Latin American School of Medicine (ELAM), which he described as “a visionary project founded to improve the quality of life of those who were born and died without having the opportunity to see a doctor.”

Minister of Public Health José Ángel Portal Miranda recalled that, since ELAM opened its doors, the staff has welcomed thousands of low-income youth, who were able to realize their dreams of becoming excellent health professionals.

Portal presented an overview of Cuban medical collaboration and highlighted the work of the more than 400,000 professionals who have provided services in 164 countries over 55 years, and the more than 29,000 working in 65 nations today. He recalled the emergence, in 2003, of the Barrio Adentro program in the Bolivarian Republic of Venezuela and Operation Miracle, to return sight to more than three million people in 35 countries; the cooperation provided to Haiti following the 2010 earthquake, and the confrontation with cholera; as well as the work of 28 Brigades from the Henry Reeve Contingent in 21 countries, including the struggle against Ebola in West Africa.