Thousands of Sandinistas and state workers from all over Nicaragua have been celebrating the 38th anniversary of the popular revolution that overthrew the U.S. backed dictator Anastasio Somoza Debayle on July 19, 1979.

The crowds filled the capital Managua’s Plaza La Fe square, to listen to speeches by the Nicaraguan President Daniel Ortega as well as his Bolivian and El Salvadorean counterparts, Evo Morales and Salvador Sanchez Cerren.

Ortega praised his country and said “Thank you Nicaragua! May Viva Nicaragua blessed, socialist, Christian and always free!….there is no alternative but the integration and unity of Latin America and the Caribbean”. 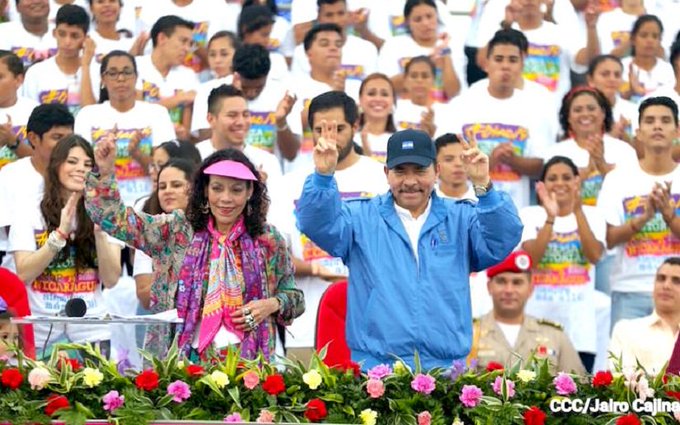 The former Sandinista guerilla then went on to lend his support to Venezuela.

Ortega backed the Venezuelan President Nicolas Maduro ahead of the country’s National Constitutent Assembly vote at the end of the month and criticised external interference.

He said “On this day when threats that we have known throughout history continue to be repeated against those who are trying to build their own path, what can we say to the brothers of the Republic of Venezuela? We tell you that we are with you. It is a popular government, it was elected by the Venezuelan people, it was not elected in another country.”

The U.S. President Donald Trump has threatened to impose economic sanctions if the Maduro government persists in holding on the July 30 election.

Ortega then slammed Washington’s threats, “How many wars have they launched in the world throughout history. What results have they had? Vietnam is the greatest expression of the failure of imperialist policy.”