Havana, Nov 29 (Prensa Latina) Cuba’s President Miguel Diaz-Canel has claimed on Thursday the US Government is denying visas and hindering diplomatic work between the two countries.
‘The US is denying visas and obstructing the work of diplomatic missions with the aim to justify and continue backtracking bilateral relations with Cuba. Both the American and Cuban people reject such perverse behavior,’ the Statesman wrote in his Twitter account.

The President’s tweet follows up a statement issued last night by the Cuban Foreign Ministry rejecting Washington’s new maneuvering to further worsen the already tense links, as part of heightened anti-Cuban hostility the Donald Trump administration has been pushing forward.

END_OF_DOCUMENT_TOKEN_TO_BE_REPLACED

Beijing, Nov 29 (Prensa Latina) China condemned this Wednesday the new entry, without permission, of US military ships to Taiwan Strait and emphasized that the event represents a threat to sovereignty and territorial integrity.
The ministries of Defense and Foreign Affairs demanded that Washington joins the One China principle and the three bilateral documents that lay the basis for handling the southern island issue.

The first government department reported that the People’s Liberation Army (PLA) activated the high alert after detecting yesterday the passage through the Strait of Gibraltar of US warships.

END_OF_DOCUMENT_TOKEN_TO_BE_REPLACED

Ramallah, Nov 29 (Prensa Latina) The Palestinian Government has urged the international community on Thursday to work hard to implement resolutions demanding an end to the Israeli occupation and allowing the Palestinian people to regain all their legitimate rights.
The Palestinian Authority declared this in a statement on the International Day of Solidarity with the Palestinian People, celebrated this Thursday.

END_OF_DOCUMENT_TOKEN_TO_BE_REPLACED

In the wake of Cuba’s withdrawal from Brazil’s More Doctors program, estimates indicate that 29 million Brazilians will be left without medical assistance.

Boticario is a town lost in the vast northeast of Brazil, in the municipality of Santo Amaro de Brotas, close to the Aracaju coast in the State of Sergipe, more than 1,600 kilometers from the capital, Brasilia.

It is hard to say if the President-elect of the country, Jair Bolsonaro, has been here, or if he knows where this town is located on the map. It is even more unlikely that he knows the story of María, a humble, young woman, 29 years of age, to whom a Cuban doctor provided relief.

Without the diagnosis of Dr. Reymeri Valderrama Pimentel, she would never have been able to fight the lymphatic filariasisshe suffered, a chronic, very debilitating disease also known as elephantiasis.

“We Cuban doctors who work in this municipality, will never forget María’s face, before and after the diagnosis, and those of her family and neighbors, who everyday placed their confidence in us and allowed us to enter their lives, despite the language and cultural barriers, that only love, professionalism, and humility can overcome,” said specialist Dr. Valderrama, who gave this testimony at the Central Medical Cooperation Unit in Havana, on the occasion of the 55th anniversary of Cuba’s international medical cooperation.

It was in 2012 that the Brazilian Institute of Applied Economic Research (IPEA) announced terrifying findings: doctors were in short supply; waiting times for appointments were long; and the quality of assistance was poor. At that time, the ratio of doctors per inhabitant was 1.8 per 1,000, according to the Brazilian Institute of Geography and Statistics (IBEG), far below other countries on the continent and around the world. Thus the analysis concluded with the proposal to raise this ratio to 2.7 doctors per 1,000 inhabitants.

Considering these statistics, it is evident that the More Doctors program, launched in August of 2013, was an urgent necessity. According to former President Dilma Rousseff, initiator of the effort, the goal was not to bring more foreign doctors to Brazil, but to take health care to the country’s interior.

The declaration released by the Cuban Ministry of Public Health, announcing its exit from the program, stated, “The work of Cuban doctors in places of extreme poverty, in the favelas of Río de Janeiro, Sao Paulo, Salvador de Bahía, in the 34 Special Indigenous Districts, especially in Amazonía, was widely recognized by federal, state, and municipal governments of the country, and by the population, who supported their presence at a level of 95%, according to a study which the Brazilian Ministry of Health requested of the Federal University of Minas Gerais.”

This reality was emphasized during the 2015 International Health Convention in Cuba, when Arthur Chioro, Brazilian Health Minister at the time, said, “Brazil has an official history of more than 500 years, and this is the first time we have doctors in all indigenous villages. This people, some 800,000 brothers, were never guaranteed access to a health team.”

The More Doctors program reached populations in Amazonia, in semi-arid regions, remote rural areas, and the outskirts of large cities, Chioro noted, adding, “Millions of people live in Sao Pablo, and in its periphery, thousands of them have no medical assistance.”

Brazilian authorities, the Pan American Health Organization (PAHO), and the population expressed their satisfaction with the program many times.

“We are very satisfied because 90% of the Brazilian doctors participating in this experience tell their Brazilian colleagues to come to the program, that it is worthwhile. This environment of success, credibility, and quality, we are morally obliged to share with the Cuban government, the PAHO, and with doctors from 30 countries who also responded to our call and make a contribution to allow Brazil to provide universal health coverage,” Chioro said at the gathering.

At the same time, he expressed the necessity of strengthening primary care with the opening of more medical schools and scholarships for residencies, “We are transforming the structure of our health system so that in ten years we have the capacity to provide this program more Brazilian doctors. We always count on the cooperation of Cuba, because we know that this sister people takes a position of great solidarity and commitment with Brazil,” he said.

END_OF_DOCUMENT_TOKEN_TO_BE_REPLACED

Damascus, Nov 20 (Prensa Latina) Since its reopening on October 15, more than 90,000 people have used the Nasseb border crossing between Syria and Jordan, authorities announced on Tuesday.
The head of the Center for Migration and Passports in the Nasseb border crossing, Colonel Mazen Ghandour, stated that about 50,854 people entered Syria, 13,778 of them are nationals who reside in neighboring countries and most of them returned definitively to this country.

END_OF_DOCUMENT_TOKEN_TO_BE_REPLACED 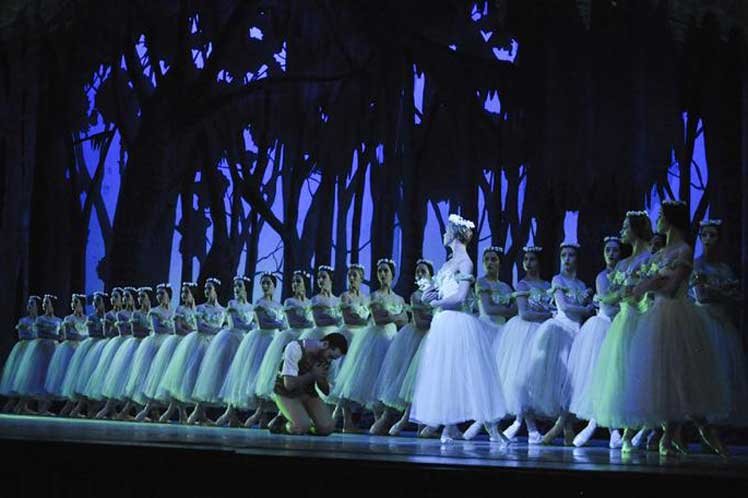 Havana, Nov 21(Prensa Latina) The first dancers of the Bavarian State Ballet, in
Germany, Laurretta Summerscales and Yonah Acosta, will star Carmen, a the version by Carlos Acosta, during the new season of his company in Cuba, according to that institution.
The shows by Acosta Danza will take place on November 30, December 1 and 2 at the Alicia Alonso Grand Theater of Havana, under the direction of Acosta himself.

For the creation of this choreography, the artist was inspired by the homonymous novel by French author Prosper Mérimée, which tells the tragic love story between a gypsy and a soldier.

In the choreography, the music was composed by Georges Bizet, with costume design by Tim Hatley and lighting by Peter Munford.

This choreographic version of Carmen was premiered by the Royal Ballet of London in 2015, with Acosta and Marianela Nuñez in the leading roles.

END_OF_DOCUMENT_TOKEN_TO_BE_REPLACED

Havana, Nov 19 (Prensa Latina) Cubans and Haitians on Monday evoked the humanism and solidarity of the historic leader of the Revolution, Fidel Castro (1926-2016), in the context of the 20th anniversary of cooperation between Havana and Port-au-Prince.
Fidel Castro, with his greatness of soul and humanism, promoted the Yes, I Can literacy program in Haiti two decades ago, guided by the thought of the Apostle Jose Marti who said ‘to be educated to be free’, recalled Elvira Beauchard, Chargé d’Affaires of the Haitian Embassy in Cuba.

According to Beauchard, the cooperation between both countries is of great importance and is based on inviolable principles such as mutual respect.

END_OF_DOCUMENT_TOKEN_TO_BE_REPLACED

Havana, Nov 19 (Prensa Latina) Cuban President Miguel Diaz-Canel on Monday evoked the conception of international cooperation by Cuban health professionals expressed by the historic leader of the Revolution, Fidel Castro.
The dignified response from our doctors reminds us how #Fidel Castro conceived Cuban cooperation in health: ‘We show that human beings can and should be better… We demonstrate the value of conscience and ethics. We offer lives’ #SomosCuba’, the president wrote on his Twitter account @DiazCanelB.

With that message, Diaz-Canel highlighted the support from Cuban doctors to the Ministry of Health’s decision not to continue participating in Brazil’s More Doctors Program

END_OF_DOCUMENT_TOKEN_TO_BE_REPLACED

Havana, Nov 19 (Prensa Latina) The Cuban Institute of Friendship with the Peoples (ICAP) on Monday defended the integrity of the Cuban doctors who are working in Brazil and condemned the derogatory statements by President-elect Jair Bolsonaro about them.
We support the statement from the Cuban Ministry of Health on the decision not to continue participating in Brazil’s More Doctors Program in a humanitarian act and to protect the physical and moral integrity of our physicians, the text added.

The document also rejected the discriminatory expressions by Bolsonaro on the Cuban health professionals who fulfill mission in Brazil.

END_OF_DOCUMENT_TOKEN_TO_BE_REPLACED

Algiers, Nov 15 (Prensa Latina) The Cuban Medical Brigade, made up of 900 medical professionals who are rendering their services in Algeria, on Thursday backed the decision by the Cuban Ministry of Public Health not to continue with Brazil”s More Doctors Program.
The doctors said in a statement released in this capital they will ‘continue with this army of white gowns’ in Algeria and in more than 60 countries where Cuba offers its solidarity in this field, especially to the humblest sectors.

The brigade assured that they will offer ‘the best of each of us’ to these people to contribute to improving the health and quality of life of Algerians, and reaffirmed that it will be the best homage to the historic leader of the Cuban Revolution, Fidel Castro, two years after his physical disappearance. The Commander in Chief ‘continues to guide us with his ideas, his undying example and his infinite love for the world’s humblest people’, the text said.

The health professionals also stressed their commitment to the homeland to continue providing assistance and bringing happiness to the Algerian people in the more than 50 communities where they are currently present.

Algeria was one of the first countries to receive the solidarity of the Cuban people in the health sector 55 years ago, and now Cuba offers its collaboration in the specialties of ophthalmology, urology, oncology and mother and child care.