The monoclonal antibody Itolizumab received authorization to start a phase III clinical trial in Covid-19 patients in the US, Mexico and Brazil, reported on Wednesday Cuba’s Center for Molecular Immunology (CIM).

Developed by that institution in collaboration with the India’s BIOCON company, this trial will consolidate the scientific pieces of evidence that supports the effective inclusion of the drug in the Cuba’s protocol for the Covid-19 treatment, warns the CIM on Twitter.

Winner of one of the National Awards of the Cuban Academy of Sciences in 2014, in the Biomedical Sciences category, the product has an anti-inflammatory and immuno-regulatory effect.

Recently, Cuban researchers also shared on social networks an article published in the Gerontology Journal about the country’s experience of Itolizumab’s use in elderly Covid-19 patients.

According to the text, the study combined the timely use of this monoclonal antibody with other antiviral and anticoagulant therapies to reduce the worsening of Covid-19 and mortality.

END_OF_DOCUMENT_TOKEN_TO_BE_REPLACED

Our country’s election to the PAHO Executive Committee, along with Surinam and Brazil, was supported by all member states, except the United States, reflecting respect for Cuban Public Health and the failure of desperate imperialist maneuvers

Neither the United States’ defamatory campaign to discredit and obstruct Cuban medical cooperation, nor its financial extortion of the Pan American Health Organization (PAHO) could prevent Cuba from being elected to the Executive Committee of the regional body for a three-year term.

The resolution designating our country, along with Surinam and Brazil, was supported by all member states, except the United States, during the second day of the 58th PAHO Directing Council’s virtual session, another victory reflecting the prestige enjoyed by Cuban Public Health, and testimony to the failure of desperate imperialist maneuvers meant to prevent Cuba’s appointment.

On this occasion, blatant lies were once again heard in the remarks of Kristen Pisani, director of the U.S. State Department’s Office of Economic Assistance and Development, who “categorically” opposed the Cuban candidacy, based on the false argument linking our international medical cooperation to trafficking in persons and unfounded questioning of our participation in the More Doctors program in Brazil. END_OF_DOCUMENT_TOKEN_TO_BE_REPLACED While there has been controversy around the deployment of the Cuban Medical Brigade, the team has been with us through the worst of the Covid-19 surge, writes Zweli Mkhize.

A little over four months ago, 187 highly skilled medical professionals boarded a South African Airways flight from Cuba – embarking on a 16-hour journey to Pretoria’s Waterkloof Air Force Base.

They touched down soon after the crack of midnight, the biting wind and drizzle juxtaposed by the warm embrace of members of the South African government’s Cuban brethren who were eagerly awaiting their arrival on the edge of the tarmac.

Most left behind their sons and daughters, wives, husbands, family and friends for unknown territory where they would spend months fighting an even more unfamiliar enemy – Covid-19.

The Cuban Medical Brigade, as they would become known, arrived at a time when South Africa had less than 5 000 cumulative Covid-19 cases and less than 90 deaths as a result of the virus – this was only the start of the battle.

They arrived armed and ready to serve and wasted no time joining thousands of their brethren who are already well integrated into the South African healthcare system.

Amid the noise and controversy, it seems to have been lost that these frontline workers have been with us through the most testing phases of our democracy as we battled through the Covid-19 surge.

They were there through the final preparations in May when we readied our infrastructure and rounded up training for medical staff. They were there when we rolled out mass testing in communities to stop the virus before it overwhelmed our health system.

They were there as cases soared into the hundreds of thousands and it seemed as though we would run out of staff and beds. And now, as we return to some normalcy, while evading a second wave in cases, they continue to play a critical role in providing quality health services to our people, especially in areas where staff have come under immense pressure.

When one considers this, it seems extraordinary that there are still South Africans who question the value of the skills, expertise and service that this brigade has brought during a time when we need as many hands on deck as we can possibly find.

Many have argued that the cost to the state outweighs the brigade’s contribution to our Covid-19 fight; I humbly submit that there is no cost too great for human life.

Our responsibility as government is to take every opportunity to use the resources at hand to strengthen the healthcare system.

The South African-Cuban medical partnership has decades of track record demonstrating its effectiveness in helping government to achieve what it is mandated to do.

Hanoi, Jul 1 (P L) Vietnam’s Party, State and its people delivered to Cuba on Wednesday the 5,000 tons of rice that they had promised to aid the country solve its food difficulties in the midst of the fight against the Covid-19 pandemic.

The delivery took place in the northern port city of Haiphong, the same city where sugar and other Cuban products arrived in the 1960s and 1970s in support of a people that were then fighting for its freedom and independence.

Cuba’s ambassador in Vietnam Lianys Torres appreciated the donation by pointing out that this noble and solidary gesture is an expression of the historic relations of special friendship and fraternity between the two countries.

The donation was made official on April 17 in Hanoi, in a ceremony in which the ambassador also received a letter from the Secretary General of the Communist Party and President of Vietnam Nguyen Phu Trong addressed to his Cuban counterpart, Raul Castro, and to Cuba’s President Miguel Diaz-Canel.

END_OF_DOCUMENT_TOKEN_TO_BE_REPLACED

During yesterday’s meeting of the COVID-19 prevention and control task force, President Díaz-Canel expressed confidence that the country can advance rapidly through the recovery period’s three phases

The President of the Republic, Miguel Díaz-Canel Bermúdez, expressed his confidence that, given the way we have worked thus far, all provinces, except Havana and Matanzas, are in a position to move into the first phase of the recovery period and advance rapidly through the remaining phases, if we continue to control the epidemic.

These comments were made yesterday, June 17, during the daily meeting of the COVID-19 prevention and control task force, which the President and Prime Minister Manuel Marrero Cruz lead, every afternoon, with all governors and the superintendent of the Isle of Youth special municipality via video conference. The agenda was focused on implementation of the first phase of the recovery period beginning today, June 18, in 13 provinces and the Isle of Youth.

With the vice president of the Republic, Salvador Valdés Mesa, and all Deputy Prime Ministers on hand, the President recognized the responsible way in which Havana and Matanzas are approaching the moment, determined to intensify work to join the rest of the country in the recovery period, as the President emphasized.

Faced with the new challenges of this stage, President Díaz-Canel insisted that the priority of saving lives must not be forgotten, saying, “Everything we do in this new phase is also directed toward this, as our number one priority.”

END_OF_DOCUMENT_TOKEN_TO_BE_REPLACED 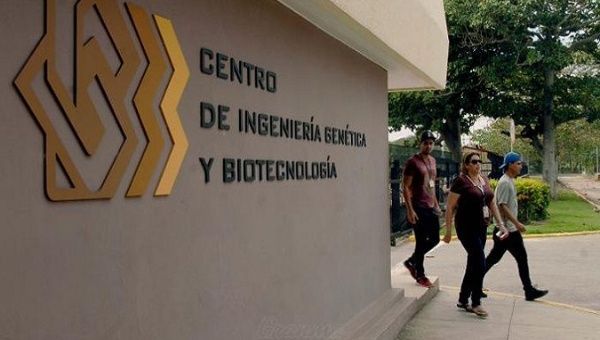 CIGB also developed a clinical study of a vaccine capable of stimulating innate immunity, which is a defense system that protects against certain diseases.

Cuban scientific authorities confirmed this week that the use of Interferon to treat COVID-19 patients was indeed effective.

Eulogio Pimentel Vázquez, President of the Cuban Center for Genetic Engineering and Biotechnology (CIGB), affirmed that the Interferon application complies with Cuban Health Ministry (Minsap) protocols. Pimentel stated that it is part of a patients’ treatment but not for those in severe and critical conditions.

“Cuban health system strength, and its close links with the biotechnology and pharmaceutical industry, in our social system, whose priority is the health of the people, makes it possible for it to reach all Cubans who need it,” Pimentel said.

END_OF_DOCUMENT_TOKEN_TO_BE_REPLACED 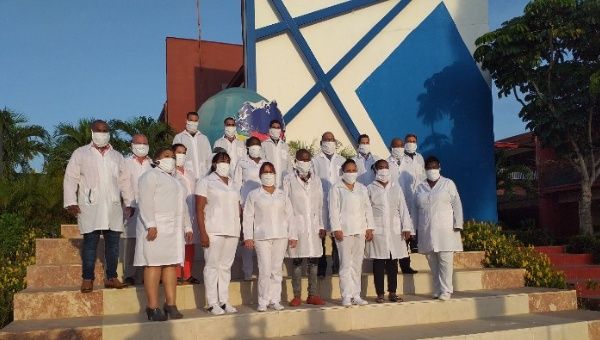 We send information provided by the population to health authorities. Then, medical workers visit people reporting symptoms and make decisions about it. That is the way it works,” Alain Pieria, leader of the project, told Xinhua.

Yosvel Falero is one of the developers of the first Cuban COVID-19 tracking app aimed at supporting efforts to stem the spread of the virus nationwide.

The 37-year-old honed his skills as a computer science professional through a Chinese government scholarship in the city of Wuhan in 2018.

“What I learnt in China has been fundamental to develop this app which will facilitate better and quicker detection of suspected cases and people infected with COVID-19 on the island,” he said.

Working almost restlessly with classic music tracks and cups of coffee, he and a group of some 20 young engineers from Cuba’s University of Computer Sciences take down notes, discuss and process data provided by nearly 200 contributors working on supporting the early detection system of suspected cases of the novel coronavirus across the country.

“We send information provided by the population to health authorities. Then, medical workers visit people reporting symptoms and make decisions about it. That is the way it works,” Alain Pieria, leader of the project, told Xinhua.

Currently, more than 3,000 students study at the University of Computer Sciences, located on the outskirts of Cuba’s capital Havana and founded by then Commander-in-Chief Fidel Castro in 2002, which aimed to develop national software industry.

It stands over the former Lurdes signals intelligence base operated by Cuba and Russia from 1964 following the Missile Crisis.

The University of Computer Sciences, which developed Cuban social media toDus and local play store ApKlis, is annually involved in nearly 100 projects intended to increase consumption of online contents produced by the state-operated sector in the island nation.

“A huge amount of technological platforms we work with has been developed in China. So, the Chinese experience has been valuable for us,” he added.

Cuba has more than 6 million internet users, according to the country’s Ministry of Communications.

“The majority of self-reports registered are sent from Havana and Villa Clara, among the virus-hardest-hit provinces in the country,” said Raidel Montesinos, president of the University of Computer Sciences.

END_OF_DOCUMENT_TOKEN_TO_BE_REPLACED

Havana, Apr 27 (P L) About 1,450 Cuban health specialists have recently traveled to several countries to fight the novel SARS-CoV-2 coronavirus, a pandemic that is currently affecting the vast majority of nations.
Those healthcare professionals are members of the Henry Reeve International Medical Brigade against Disasters and Serious Epidemics, created in 2005 by the historic leader of the Cuban Revolution, Fidel Castro, this time, they are assisting countries affected by the novel coronavirus.

The almost 1,500 doctors and professionals in nursing make up the 22 healthcare brigades sent by Havana at the request of governments from several countries to help fighting the disease.

The most recent brigade arrived in South Africa on Sunday, made up of 217 healthcare professionals.

END_OF_DOCUMENT_TOKEN_TO_BE_REPLACED

Cuban Foreign Affairs Minister Bruno Rodriguez said today that humanity demands an effective solution to the Covid-19, a pandemic affecting most of the planet.
In his account on the social network Twitter, the foreign minister stressed that this is a crisis of multiple and devastating effects not only in the field of health, but also in the economy, international trade and society.

Rodriguez called for a joint international effort and stressed that ‘together we can make it happen’.

In a recent statement, the island’s Foreign Ministry noted that the crisis caused by the new SARS Cov-2 coronavirus goes far beyond the health field.

The text warned that the pandemic arrived and spread in a scenario previously characterized by overwhelming economic and social inequality between and within nations, with unprecedented migration and refugee flows.