“Divide and conquer” was a phrase used by both the Roman emperor Julius Caesar and France’s Napoleon Bonaparte. Despite differences with the military tactics used by these historical figures, this approach seems to be the United States’ political strategy toward Latin America and the Caribbean, in another desperate attempt to divide peoples south of the Rio Bravo and regain ground in an area that Washington continues to consider as its “backyard.”

This modus operandi has been employed in various ways in the region. Offering some carrots and others the stick, applying coercion, promoting conflict or disrupting independent mechanisms of integration, this is how the U.S. administration has worked throughout history. Aware of the risks that unity in Our America entails for its imperial interests, the government has made crafty political moves to undermine integrationist organizations, as part of its plans for a conservative restoration.

On the one hand, the White House promotes the Lima Group and the discredited Organization of American States (OAS) as forums to legitimize the war against Venezuela and other countries that do not submit to its designs. On the other hand, the U.S. maneuvered to incite the exit of Argentina, Brazil, Chile, Colombia, Paraguay and Peru from the Union of South American Nations (Unasur) in 2018, and in 2019 Ecuador; Ecuador and Bolivia’s departure from the Bolivarian Alliance for the Peoples of Our America-People’s Trade Treaty (ALBA-TCP); and the recent withdrawal of Brazil from the Community of Latin American and Caribbean States (CELAC).

Now, U.S. plans seem to be directed toward tearing apart the Caribbean Community (Caricom). Last year, U.S. President Donald Trump met with leaders of a selected group of nations in Florida. Among the topics on the meeting’s agenda were regional cooperation and the situation in Venezuela. After the meeting, White House spokesman Hogan Gidley said in a press release that the government sponsored Overseas Private Investment Corporation (OPIC) will prioritize the five countries whose leaders met with Trump.

January 21, U.S. Secretary of State Mike Pompeo arrived in Jamaica, where he held meetings with Jamaican leaders, including Prime Minister Andrew Holness, and emphasized the importance of Caribbean relations with the U.S.

END_OF_DOCUMENT_TOKEN_TO_BE_REPLACED

Vatican City, Dec 25 (P L) A call for peace, justice, reconciliation and mercy, especially with the most vulnerable people, was made by Pope Francis to the world here today for Christmas.
In his traditional message ‘Urbi et Orbe’ (From the City to the World), the Supreme Pontiff affirmed that ‘the light of Christ’ prevails over the darkness existing ‘in human hearts’, ‘in personal, family and social relationships’ and ‘in economic, geopolitical and ecological conflicts’.

In this sense, he asked that this light touch ‘so many children who suffer from war and conflicts in the Middle East and in various countries of the world’ and that ‘the little Child of Bethlehem’ be a hope for the entire American continent, ‘where various nations are going through a period of social and political upheaval.

May it revive – he specified – the beloved Venezuelan people, long tried by political and social tensions, and not fail to receive the help it needs.

END_OF_DOCUMENT_TOKEN_TO_BE_REPLACED

Havana, Dec 26 (P L) Latin America is undergoing a process of re-impoverishment resulting not only from economic factors, but also from social policy cuts, asserted Frei Betto in an article published on the Cubadebate website.
According to the Brazilian intellectual, author of about 60 books on various topics, this reality is especially notable in countries where parliamentary coups have occurred, such as Honduras, Paraguay and Brazil, and in those that in recent years have been governed by neoliberal presidents, such as Argentina and Chile.

The continent, with 638 million inhabitants, is today the most unequal region in the world. After a decade of reducing poverty and inequality, the rates are once again worrying, due to tax evasion and cuts in social programs, he said.

In his article, Betto recalls that in 2002, 44.5 percent of Latin Americans lived in poverty, 11.2 percent in misery, and today 30 percent of the continent’s population — 210 million people — live in poverty and misery.

END_OF_DOCUMENT_TOKEN_TO_BE_REPLACED

Havana, Dec 19 (P L) Cuba shows progress and will continue to grow in different spheres in 2020 amid the economic, commercial and financial blockade imposed by the United States for almost six decades.
The economy will not decrease and the positive results constitute a victory against this hostile Washington policy, stressed Minister of Economy and Planning, Alejandro Gil, in the plenary prior to the Fourth Ordinary Period of Sessions of the Ninth Legislature of the National Assembly of People’s Power (Cuban Parliament).

Our economy shows signs of vitality and by 2020 we will follow basic premises such as prioritizing the entry of hard currency, and bear in mind that we cannot spend more than what receive, so there must be a balance, Gil stressed in Havana’s International Conference Center.

END_OF_DOCUMENT_TOKEN_TO_BE_REPLACED

Havana, Dec 14 (P L) The regional situation and the role of the Bolivarian Alliance for the Peoples of Our America-Peoples’ Trade Agreement (ALBA-TCP) will focus debate of the 17th Summit here today.
The leaders and senior political representatives will also celebrate the 15th anniversary of the regional mechanism founded December 14, 2004 by the leaders of the Cuban Revolution, Fidel Castro, and the Bolivarian Venezuela, Hugo Chávez.

Solidarity, complementarity, justice and cooperation are the principles defended by ALBA-TCP, emerged as an alternative to the hegemony of capital that threatened to expand throughout Latin America and the Caribbean.

The instance promotes since its creation an equitable trade between peoples, in opposition to neoliberal formulas.

The eradication of illiteracy through the Cuban method Yes, I Can; and the free eye surgeries with the Miracle Mission, are part of the achievements of this mechanism in the social sphere.

Initially named ‘Alternative’, it changed its nomenclature in 2009 in an Extraordinary Summit in Venezuela, reflecting its strengthening.

END_OF_DOCUMENT_TOKEN_TO_BE_REPLACED

Havana, Dec 13 (P L) Cuba will ratify its commitment to cooperation, solidarity and peace, on the 15th anniversary of the founding of the Bolivarian Alliance for the Peoples of Our America-Peoples’ Trade Agreement (ALBA-TCP), Foreign Minister Bruno Rodriguez affirmed on Friday.
The head of Cuban diplomacy wrote on his Twitter account that this commitment comes at a juncture marked by ‘the dangerous imperialist and neoliberal escalation unleashed against Our America.’

He also referred to the 17th ALBA-TCP Summit, scheduled for this Saturday in Havana, which will analyze the regional situation after the coup d’état in Bolivia, the popular anti-neoliberal mobilizations in Chile and Colombia, and the increase in US hostility against Cuba, among other issues.

ALBA-TCP eaders and senior political representatives will also celebrate the 15th anniversary of the Alliance founded on December 14, 2004 by leaders Fidel Castro and Hugo Chavez.

END_OF_DOCUMENT_TOKEN_TO_BE_REPLACED

Mexico, Nov 11 (P L) Mexican President Andres Manuel Lopez Obrador today issued a clear ‘No to silence’ in reference to the negative and servile attitude of the Organization of American States (OAS) regarding the coup in Bolivia.

The situation in Bolivia was the focus of the President’s daily press conference, in which Foreign Secretary Marcelo Ebrard explained the government’s position of rejection and condemnation of the coup and referred to the position adopted by the OAS.

Following Ebrard’s presentation, López Obrador reiterated the condemnation of the coup, and rejected the possibility of a military government, censorship and the position of the OAS, and stressed the need for a meeting to clarify the ‘very clear position of Mexico on that sensitive issue.’

He reiterated that he had expressed his recognition of President Evo Morales’ decision to resign, to protect the lives of his fellow citizens. ‘The rest with respect to Bolivia has already been explained very clearly and precisely by Marcelo Ebrard,’ he added.

END_OF_DOCUMENT_TOKEN_TO_BE_REPLACED

Baku, Oct 22 (P L) Cuba has registered an active performance in the work and history of the Non-Aligned Movement (NAM), whose 18th Summit of Heads of State and Government will take place in Baku, capital of Azerbaijan.
The NAM summit will be held on October 25 and 26, to which Cuban President Miguel Diaz-Canel will participate.

Baku, located on the western coast of Caspian Sea, will host the meeting that will bring together representatives from 120 member countries. Other nations and international organizations will attend as observers.

Cuba is a founding member of NAM and the first country in Latin America and the Caribbean to be a part of it. It was in Belgrade in 1961, just five months after the invasion on Playa Giron (Bay of Pigs), in central Cuba, was defeated, which was financed, armed and directed by the United States against the new Cuban Revolution.

Cuba chaired the NAM twice, in which it hosted the meeting of heads of State and Government. Havana hosted the 6th Summit in 1979 and the 14th Summit in 2006.

END_OF_DOCUMENT_TOKEN_TO_BE_REPLACED 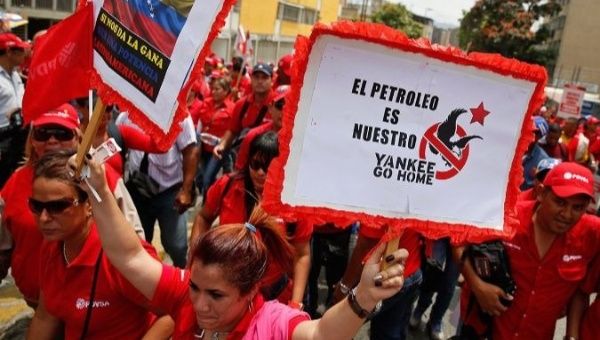 Russian Foreign Minister Sergey Lavrov pointed out that the U.S. had “dusted off the notorious Monroe Doctrine” to threaten countries like Venezuela.

Russian Defense Minister Sergey Shoigu said Wednesday that the use of force to influence Latin American countries, by the United States, is “exerting unprecedented pressure” on Venezuela.

“In the Western Hemisphere, the U.S. is taking upthe Monroe doctrine, which aims to limit the sovereignty of Latin American countries, to put pressure on those who do not follow the same policies as Washington, as an instrument of pressure they take into account all possible methods, including force,” said the defence minister.

“The best example is the situation in Venezuela, where the legitimate government is exposed to unprecedented external pressure.”

On April 13, Russian Foreign Minister Sergey Lavrov also pointed out that Washington had “dusted off the notorious Monroe Doctrine” to threaten countries like Venezuela.

Lavrov said that the United States has so far failed in its attempts to force a change of government in Venezuela, but has continued to attempt to force the exit of Nicolas Maduro.

END_OF_DOCUMENT_TOKEN_TO_BE_REPLACED

Havana, Oct 26 (P L) Russia and Latin America and the Caribbean will tighten bilateral links during the business forum to be held next week as part of the 36th International Havana Trade Fair (FIHAV 2018).
The forum, as it was informed recently in a press conference, will be the only platform of interaction between representatives of state organizations and those of the business sector.

In the forum participants will know about commercial, economic and investment opportunities between Russia and the countries of this region.

It will also be a platform of issues of public support to enterprises of that nation and those of Latin America, as well as the development of integration processes in the Euroasian region and in Latin America, said sources of the organizing committee of Fihav 2018.