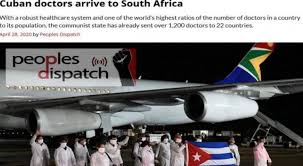 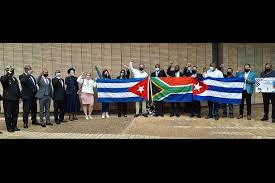 We former students of Cuba and graduates thereof in South Africa hereby condemn the injustice, inhumane and diabolic economic blockade against the peaceful Republic of Cuba which has been rejected many times by almost all countries except two in the United Nation’s Assembly as from 1992. We condemn the aggression that has been increased and shown by the United States government under President Joe Biden who has added more economic sanctions against the peaceful and sovereign Republic of Cuba to those re-imposed by Donald Trump after President Barrack Obama had removed part thereof. The USA President and its Congress must put an end to all these UN annual votes that are absolutely unfair to the government of Cuba and its People. It is very much unfair to Cuba more especially during these difficult times of the devastating Covid-19 epidemic to be faced with this USA aggression which is carried by the USA agents within and outside the country.

We also would like to appreciate the good work being done by Cuba and its people of great support being offered to many countries by educating their youth, sending health professionals and other specialists in different fields like hydrology, education, sports, military, civil and architectural engineering, etc. It should also be recognised that Cuba managed to develop its own vaccines for its people and managed to vaccinate 79% of its population and currently being one of the first countries in vaccinating small children. We congratulate Cuba for reopening schools again and reopening borders and therefore allowing international travellers to arrive again at this beautiful Island of Humanity. All these above achievements by a small country being a neighbour to this “giant imperialist USA” does not go well as it shows the power and potential of Socialism of which the capitalist USA deeply hates. All these human gestures to all people of the World including the Henry Reeve Medical Brigade humanitarian assistance to different Nations will always be a sore of pain to those who hate humanity and Solidarity of Nations.

We say to the USA President and their Congress that evilness never prevails like in the case of the racist apartheid system that brutally killed and tortured many of us, that your evil intentions of suppressing Cuba and subjecting it during these difficult times to brutality at its best will not last long as your intentions of killing children and the old aged will be severely punished by God the Almighty with a mighty sword of defence to humanity, justice and Love. This diabolic economic blockade of yours cannot at any stage be justified except to be removed with immediate effect. We have noted your aggressiveness in increasing the intensity of using social media to internally attack Cuba with your evil agents in Miami and the World at large and hence we also intent to maximise our efforts in defending the Socialist Cuban Revolution at all costs and increase campaigns against the USA counterrevolutionary policies. The recent negative manifestations in Cuba against the sovereign state thereof are indicative of the USA government agents’ bad intentions of instigating social-economic instability and racial tension in this peaceful Caribbean Island. 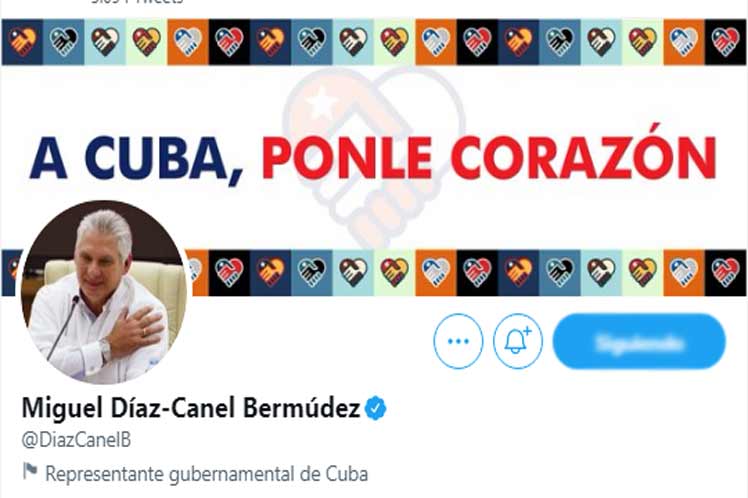 Under no circumstance will Cuba allow the persistent aggression of the U.S. government against the country to alter the peace of the nation, President Miguel Díaz-Canel remarked today.

In his official Twitter account, the president also pointed out that Washington’s constant aggressions will not harm “citizen security and the social peace that caracterize our people”.

The head of state’s statements are in reference to the new destabilizing attempts instigated and financed from the northern country, as part of a hostile policy of more than 60 years against the Island.

Recently, Cuban Foreign Minister Bruno Rodriguez denounced the illegal nature of a march called for next Monday by those he described as internal agents recruited, financed and organized by the U.S. government.

END_OF_DOCUMENT_TOKEN_TO_BE_REPLACED

The director of the Joburg Ballet company, Dirk Badenhorst, expressed his deep solidarity with the Cuban people. As excellent, he described the relations of friendship and collaboration that he maintained with the National Ballet School of Cuba and the National Ballet of Cuba, institutions to which he sent a message of gratitude for their support and continued friendship.

When speaking on the current Cuban situation, during an interview with Prensa Latina, this outstanding dancer expressed his hope that the autonomy of each nation will be respected by the great powers of the world, alluding to the United Sates government and its interventionist intentions. He called for the end of the economic, commercial and financial blockade, which the United States has imposed on Cuba for more than 60 years.

END_OF_DOCUMENT_TOKEN_TO_BE_REPLACED 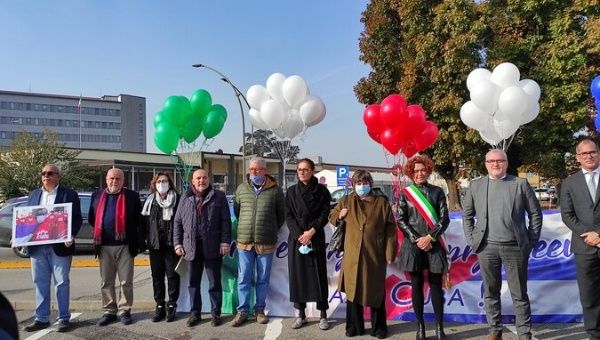 The city of Crema, Italy, once again recognizes the solidarity of the Henry Reeve Cuban Brigade with its inhabitants. This morning, the mayor, Stefania Bonaldi, titled the square of the Crema Hospital as “Henry Reeve” Cuban Medical Brigade square.

The Mayor of Crema, Stefania Bonaldi, the Cuban Ambassador to Italy, Josè Carlos Rodriguez Ruiz, the President of the National Association of Italy-Cuba Friendship, Marco Papacci, and the General Director of the ASST Hospital of Crema, Ida Maria Ada Ramponi, were present.

The President of the National Association of Italy-Cuba Friendship, Marco Papacci, recalled how the brigade of Cuban doctors exalted the humanist principle of Cuban medicine and that the human being and not profit is the center of Cuban society, whose ideals inspired the leader of the Cuban Revolution, Fidel Castro Ruz.

Stefania Bonaldi, mayor of the city of Crema said that “this gesture is the visible representation of a nesting in the heart of our community, something that already happened several months ago and that at this moment we formalize, declaring it publicly, making it testimony, constituting it common patrimony.”

He continued his speech affirming that in the hard moments that the community lived because of COVID-19 “paralyzing the lives of all, endangering the lives of many, taking several lives,” was when the Cuban doctors of the Henry Reeve brigade arrived, “erecting a wall against what threatened us, using the concrete of competence, passion, compassion and solidarity.” END_OF_DOCUMENT_TOKEN_TO_BE_REPLACED 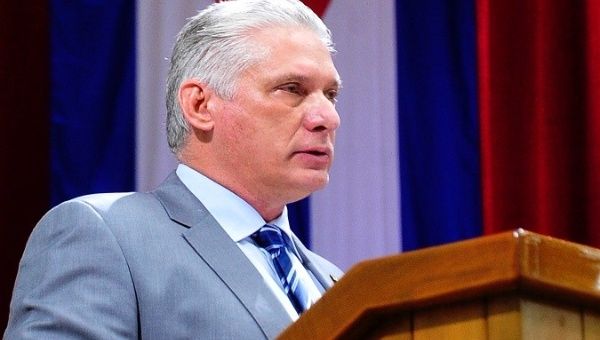 The Cuban President ratified that socialism has allowed his country to develop amid the U.S. harsh economic blockade.

During a parlamentary session on Thursday, Cuba’s President Miguel Diaz-Canel denounced that the U.S. diplomatic mission in Havana has supported destabilizing attempts to overthrow the Cuban revolution.

“Although the U.S. President Biden promised to improve diplomatic relations with Cuba, his administration financed the July 11 march, which called for an U.S. military intervention,” Diaz-Canel condemned.

“American diplomats met with the march promoters and gave them logistical support. How would the Biden administration respond if any diplomatic mission promoted demonstrations against its country’s rule of law?” he questioned, stressing that Cuba has never meddled in U.S. internal affairs.

END_OF_DOCUMENT_TOKEN_TO_BE_REPLACED

# Exercise of legitimate defense, #"We will wield our most powerful weapons, #Cuba, #Unity and patriotism

Given the latest escalation of subversive campaigns against the Revolution, the Federation of Cuban Workers (CTC) issued a statement outlining the national proletariat’s intransigent position rejecting the most recent maneuvers orchestrated by “internal political operators, led and encouraged from abroad,” who have announced “the intention to conduct a march which they present as peaceful and lawful, invoking the Constitution.”

In reference to Articles in the Magna Carta, the CTC recalled that no legal demonstration can disturb citizen tranquility, incite overthrowing the established order, infringe on the rights of others, affect collective security, general welfare or the public order, and must always be conducted with respect for the law.

On the contrary, the statement asserts, the poorly disguised objective of the mercenary ruckus is to provoke a change in Cuba’s political system and a return to capitalism; noting that this is made clear by “the decisive support, evident in the avalanche of messages on social networks, by figures abroad clamoring for a U.S. military intervention, notorious terrorists, counter-revolutionary figures in Florida and even the remains of the defeated mercenary Brigade 2506.” END_OF_DOCUMENT_TOKEN_TO_BE_REPLACED

#Cuba, #Cuban culture constitutes a moral trench that upholds the emancipatory work of our homeland, #Defending our culture

A redemptive anthem, a city for the first time free from the foreign yoke, and a rebellious history that began with the Mambi, remind us every October 20 why the Cuban people feel tremendously proud to celebrate National Culture Day today.

There are many reasons to commemorate and defend what we understand as our identity.

Considered shield and sword of the nation, a sublime mixture of our deepest roots, Cuban culture constitutes a moral trench that upholds the emancipatory work of our homeland.

Our enemies are intent on erasing this culture, which has been extended to education, sports and medicine as symbolic of a country, from our souls, with treacherous invitations in cyberspace, and condemn us to historical oblivion and detachment from the values forged by the Revolution.

The usual enemies, amidst the complex situation we face – with the tightening of the blockade and the impact of COVID-19 – direct their subversion laboratories against the very heart of the homeland: our culture.

Party First Secretary and President of the Republic Miguel Díaz-Canel Bermudez has made the people’s position clear, as we confront this unconventional war, in which the present and future of the nation are being defended.
END_OF_DOCUMENT_TOKEN_TO_BE_REPLACED 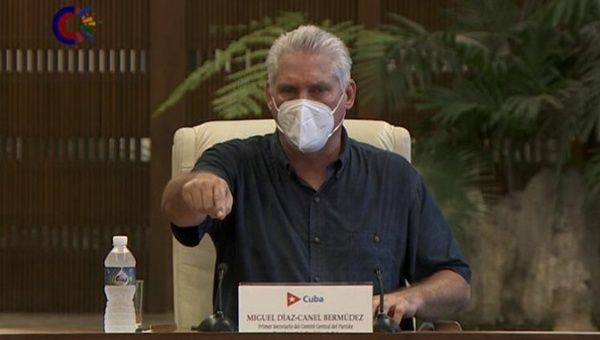 An editorial published today by Granma newspaper points out that the organizers of this event use constitutional precepts to defend anti-constitutional strategies.

The Cuban Foreign Ministry today rejected attempts to provoke the destabilization of the country’s constitutional order through a march whose promoters are at the service of U.S.  interests.

The director-general of the U.S. office of the Ministry of Foreign Affairs, Carlos Fernández de Cossío, wrote on Twitter that “a demonstration or march whose ostensible purpose is to lead sooner or later to the overthrow of the government cannot be authorized, even less if it is promoted in the service of the U.S..”

The Cuban diplomat referred to the events that took place this Tuesday, when several municipal authorities denied authorization to a march called for next November, an action described as illicit and provocative.

END_OF_DOCUMENT_TOKEN_TO_BE_REPLACED 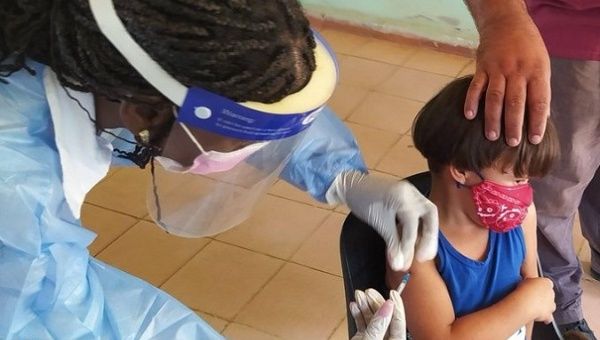 Cuba’s pediatric population aged six years, 11 months and 29 days will receive as of Monday the anti-flu vaccination, aimed at preventing severe complications related to seasonal influenza in the Southern Hemisphere.

The group will receive two doses of the vaccine with a four-week interval between them in a campaign designed to last until December.

Pregnant women, regardless of pregnancy trimester, and asthmatic and diabetes patients aged 19 to 24 years are also included, according to a note from the Ministry of Health.

Subsequently, adults aged 85 years and older and people in nursing homes, grandparents’ houses and psycho-pedagogical centers will also be vaccinated.

In addition, poultry and livestock workers exposed to the risk of influenza will also be included. END_OF_DOCUMENT_TOKEN_TO_BE_REPLACED