Buenos Aires, Nov 26 (Prensa Latina) With the example and thought of Fidel Castro as a guide to confront the turbulent times in Latin America, Argentines and Cubans on Monday exalted the outstanding leader of the Cuban Revolution in an emotional evening.

Three years after his physical departure, patriotism, solidarity and internationalism but above all Fidel’s humanism and infinite love for his people, they were highlighted in a tribute where the culture of both countries felt like a breath of hope from this south side.

The beautiful Rome theater of the Buenos Aires town of Avellaneda, hosted the cultural evening in honor of Fidel, who marked a before and after in the history of Latin America and became one of the greatest leaders of the twentieth and twenty-first century.

‘Fidel was his people, he felt it, that closeness was what made our Revolution endure all these years, there is no generation that has not been marked by his thought,’ the Cuban ambassador to Argentina, Orestes Pérez, who recalled the close relationship of the revolutionary leader with his countrymen.

The diplomat recalled Fidel as friend, the Latin American and humanist after pointing out that he is still alive in every Cuban, in every Argentinean who believes in the work of the Revolution, in every fighter in Latin America.

Perez said that in these times the region is going through, with a coup d’etat in Bolivia and the complex scenarios ahead ‘all our peoples must continue thinking about that optimism that always characterized Fidel’ and urged him to continue his legacy and example.

END_OF_DOCUMENT_TOKEN_TO_BE_REPLACED

Buenos Aires, Mar 14 (P L) In an emotional video broadcast on social media, Argentina’s former President Cristina Fernandez denounced how the fierce political persecution against her daughter, currently under treatment in Cuba, weakened her health condition.
The former president posted a message on Twitter some few hours before leaving for Havana, where Florencia Kirchner remains hospitalized since March 7 with poor health, which prohibits her from sitting or standing for prolonged periods of time.

In the video where she is heard with a broken voice at times, the current senator for the Unidad Ciudadana party described how, due to all her daughter has suffered in recent times, even accused of being part of an illegal association, she has damaged her physical state.

In the four-minute message, Fernandez also complains that once again ‘not only the rights of citizens who are opposed to the government of Mauricio Macri are violated in the courts of Comodoro Py, but also all rights of our sons and daughters are violated.’

The former president, who has denounced being a victim of an unprecedented political and judicial persecution -asigned on Thursday in eight different cases-, explained that a medical certificate on Florencia’s health condition was presented at courts, to which her own daughter attended once she was cited.

END_OF_DOCUMENT_TOKEN_TO_BE_REPLACED 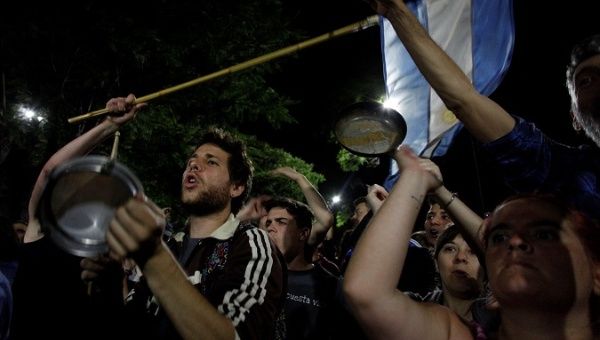 On Tuesday, the Argentine Labor Department “promised” the 380 PWU public workers it would create a roundtable discussion as early as today among the two entities.

END_OF_DOCUMENT_TOKEN_TO_BE_REPLACED

A federal judge alleges Fernandez committed treason in trying to “conceal” the involvement of Iranian officials in the bombing of the Israeli-Argentine Mutualist Association.