(P L) President Raul Castro highlighted the excellent relations between the Cuba and Vietnam, after being awarded with the Golden Star Order, the maximum decoration granted by that Asian country, in Havana on Thursday.
Prensa Latina transmits the unabridged text of the speech given by Army General Raul Castro Ruz, First Secretary of the Central Committee of the Communist Party and President of the Councils of State and of Ministers, after receiving the maximum decoration granted by Vietnam.

END_OF_DOCUMENT_TOKEN_TO_BE_REPLACED 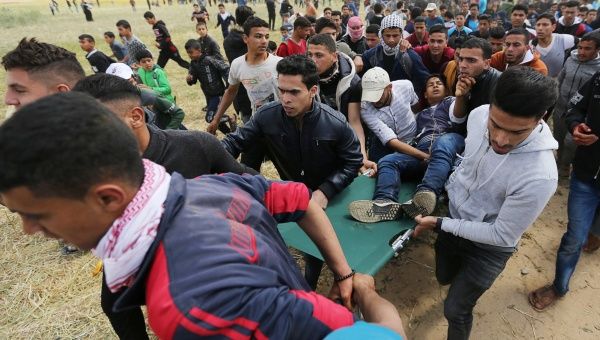 One of the dead, a Gaza farmer, was killed by an Israeli tank shell in the southern Gaza Strip.

At least seven Palestinians have been killed, and hundreds have been reported injured in protests along the Gaza border on Friday.

END_OF_DOCUMENT_TOKEN_TO_BE_REPLACED

On the occasion of a visit to our country by Nguyen Phu Trong, secretary general of the Communist Party of Vietnam, Granma offers a summary of events shared by the sister nations.

1- THE ESTABLISHMENT OF DIPLOMATIC RELATONS:

During the commemoration of the landing of the yacht Granma and the creation of the Revolutionary Armed Forces, December 2, 1960, Fidel announced the decision to establish formal diplomatic relations with Vietnam.

In the 1960s, the first group of Vietnamese students arrived in Cuba. Since 1961, more than 3,000 have studied different fields here. Cuba offers scholarships every year to youth to pursue degrees here.

September 25, 1963, the Cuban Committee for Solidarity with South Vietnam was founded, headed by Moncada heroine Melba Hernández and supported by mass organizations across the island. Public events and symposiums were organized to denounce the horrors of napalm. Today the organization is known as the Cuba-Vietnam Friendship Association.

END_OF_DOCUMENT_TOKEN_TO_BE_REPLACED

The Battle of Cuito Cuanavale continues to be remembered by Cubans and Angolans, who dealt a crushing blow to the invading troops of the South African apartheid regime

AFTER a period of calm for the Angolan military, the atmosphere began to heat up at the end of 1987, when an enclave in the extreme southeast of the country began to capture the attention of the world’s press: Cuito Cuanavale.

It would be around the beginning of November, when the name of the aforementioned town reached the ears of the team of Cuban correspondents accredited in Luanda for the first time, through informal conversations:

“They say that in the south things are really heating up. UNITA (National Union for the Total Independence of Angola) forced FAPLA (People’s Armed Forces of Liberation of Angola) to retreat and now their units are defending themselves near Cuito ‘Carnavales’ or ‘Cuarnavale’… Search me!”

END_OF_DOCUMENT_TOKEN_TO_BE_REPLACED

# For travel to Cuba, #Cuba, #Tourism in Cuba

The year’s first million visitors have arrived in Cuba, as the country looks to welcome five million in 2018, an increase on the order of 6%

CUBA was hit hard less than six months ago by a hurricane that caused considerable damage to the country’s four principal tourist destinations. It is the only island nation in the world which, by law, U.S. citizens are not allowed to visit as tourists, and figures among the countries which Washington has singled out with travel advisories, recommending that travelers “reconsider” visiting.

Nevertheless, as of this month, theyear’s first million visitors have arrived in Cuba, some 67,000 hotel rooms are available, along with more than 21,000 family bed and breakfasts, while 68 airlines operate flights linking the island to 70 important cities around the world. Cruise lines with six ports of call and stopovers located on the island make this modality increasingly popular, and the country was recently recognized as the “most secure for tourism” at the 38th international Tourism Fair (Fitur), in Madrid.

Changes in the panorama have created difficulties, but the country continues as one of the Caribbean’s favorite destinations. According to statements by Janet Ayala, the Ministry of Tourism’s public information officer, although the figure of one million visitors was reached four days later than last year, it remains a notable accomplishment given the pressures and adverse conditions faced by the sector over this last period.

END_OF_DOCUMENT_TOKEN_TO_BE_REPLACED

(Prensa Latina) More than 300 delegates from around 20 countries are registered for the 3rd International Congress of Researchers on Youth, opened today in the Cuban capital.
The main issue of the biennial event is ‘Unipolarity, globalization and youth: political actions and social transformations.’

END_OF_DOCUMENT_TOKEN_TO_BE_REPLACED

(P L) Africa must start paying its own bills, pointed out the African Union (AU) pro tempore president, Paul Kagame, in statements to the regional bloc.
According to the AU, Kagame, also Rwanda Head of State, told the press about a wide range of issues related to the Pan-African organization, starting from the rights of broadcasting the content up to the process of reforms and African immigrants in Europe.

END_OF_DOCUMENT_TOKEN_TO_BE_REPLACED

(P L) Venezuela”s Government is readying its mightiest and fearsome force to repel an aggression against the country, the militia, Defense Minister Vladimir Padrino wrote in Twitter.
Made up of 300,000 members, the National Bolivarian Militia (MNB, in Spanish) is deployed across the country and it is feared by the US Southern Command who are worried about getting bogged down whether they decide to attack Bolivar’s homeland, according to comments by their own analysts, Padrino stressed.