Massive demonstrations have been growing across Bolivia since President Evo Morales was deposed in a right-wing coup d’etat a week ago. 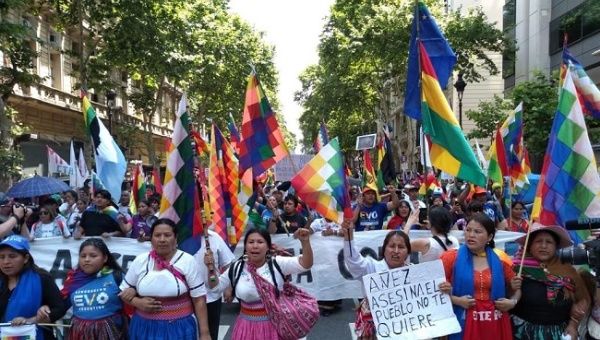 The Bolivian security forces set up road blocks across Cochabamba today as mass demonstrations are taking place against the brutal attacks carried out against the people last week.

Dictatorship is Preparing for a State of Siege: Evo Morales

Three marches have entered the city of Cochabamba already, as they chant for justice and the end of this de facto government that is led by the self-declared president Jeanine Anez.

Last Friday, the Bolivian security forces attacked a crowd of civilians in Cochabamba that were demonstrating in support of the deposed President Evo Morales. The attack would turn into a massacre as nine Indigenous people were killed at the hands of the security forces.

The Indigenous people in Cochabamba were protesting the recent coup that led to the overthrow of the democratically elected President Evo Morales by the right-wing opposition.

In response to this massacre, tens of thousands of Bolivians took to the streets of Cochabamba to denounce the killings and the new government that is led by the self-declared president Jeanine Anez.

END_OF_DOCUMENT_TOKEN_TO_BE_REPLACED 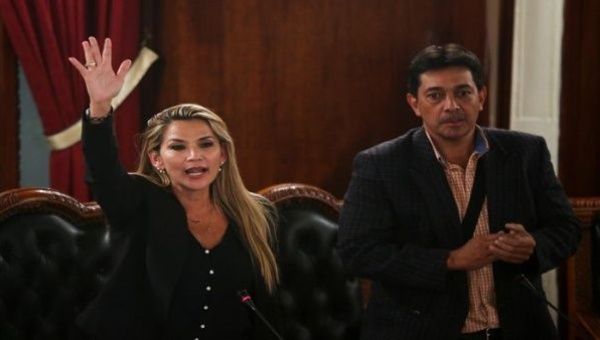 Opposition Senator Jeanine Áñez declared herself president of Bolivia on Tuesday, despite not meeting with the constitutional requirements for such a move, as Parliament did not achieve a quorum because the lawmakers of the Movement to Socialism (MAS) could not attend, due to a lack of guarantees for their security. MAS has a majority in Parliament.

“I immediately assume the presidency of the State and I undertake to take all necessary measures to pacify the country,” said Áñez, who is the second vice president of the Senate of Bolivia and from the right-wing Social Democratic Movement.

The senator proclaimed herself president only with a minimum presence of deputies, all from the opposition.

On Tuesday, an extraordinary session of both chambers (Deputies and Senate) of the Plurinational Legislative Assembly (Parliament) was convened, but the representatives of the Movement to Socialism, which are the majority, did not attend because they did not have guarantees for their safety and that of their family members, therefore, Parliament had suspended its session due to the lack of quorum.

Bolivia is going through a political crisis after the forced resignation of President Evo Morales, his vice president Álvaro García Linera, and presidents of the Deputies and Senator’s chambers, due to the wave of opposition violence that lashed out at indigenous and peasant population.

END_OF_DOCUMENT_TOKEN_TO_BE_REPLACED 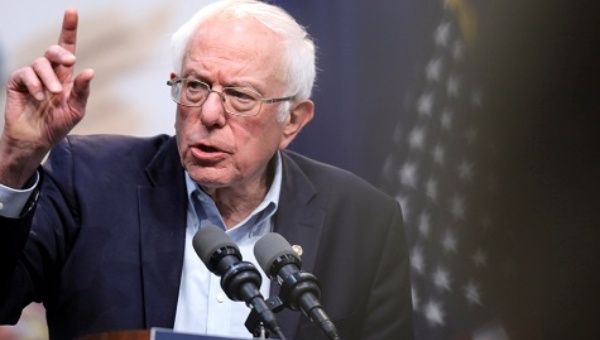 “I am very concerned about what appears to be a coup in Bolivia,” Sanders said in a tweet.

“I am very concerned about what appears to be a coup in Bolivia, where the military, after weeks of political unrest, intervened to remove President Evo Morales,” Sanders said in a tweet, adding that “the U.S. must call for an end to violence and support Bolivia’s democratic institutions.”

The Vermont senator’s remarks came after pressure from his left-wing grassroots movement which called to condemn the events of recent days in the South American country.

Bolivian President Evo Morales was forced to resign Sunday after the army and police called on him to do so following weeks of right-wing unrest and violence against his Oct. 20 elections victory.

END_OF_DOCUMENT_TOKEN_TO_BE_REPLACED 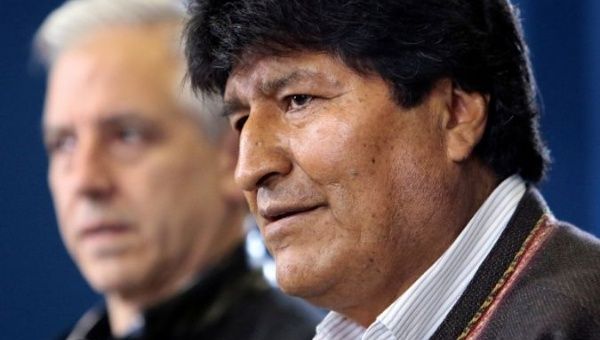 Cuba’s government was also quick to reject the coup as President Miguel Diaz-Canel urged for “the world to mobilize for the life and freedom of Evo.”

World leaders and organizations expressed Sunday their solidarity with former Bolivian President Evo Morales under the hashtag #ElMundoconEvo (the World with Evo) and strongly condemned the right-wing coup which forced Morales to resign.

“I just heard that there was a coup d’état in Bolivia and that comrade Evo was forced to resign. It is unfortunate that Latin America has an economic elite that does not know how to live with democracy and the social inclusion of the poorest,” former Brazilian President and Leader of the Workers’ Party (PT) Luiz Inacio Lula da Silva said.

The historic Brazilian leader’s message was echoed by Venezuelan President Nicolas Maduro who “categorically condemned the consummated coup d’etat against the brother president Evo,” adding that “the social and political movements of the world declare mobilization to demand the preservation of the life of the Bolivian Indigenous people victims of racism.”

Cuba’s government was also quick to reject the coup as President Miguel Diaz-Canel urged for “the world to mobilize for the life and freedom of Evo.” Mexico’s President Andres Manuel Lopez Obrador praised Morales’ decision to put the people first over his mandate.

This comes as Morales was forced to resign Sunday after senior army and police chiefs called on him to do so following weeks of right-wing unrest and violence against his Oct. 20 elections victory, in what his government has called a coup by opposition forces in the country.

“I decided to resign from my position so that Carlos Mesa and Luis Camacho stop abusing and harming thousands of brothers … I have the obligation to seek peace and it hurts a lot that we face Bolivians,” the former president of Bolivia said in a press statement.

END_OF_DOCUMENT_TOKEN_TO_BE_REPLACED

La Paz, Jun  (P L) Professionals from the Cuban Medical Brigade (BMC) in Bolivia are continuing their humanitarian work to serve the Bolivian people, where they have treated more than 70 million people and saved some 100,000 lives.

Recently, at the Riberalta General Hospital in the department of Beni, Cuban doctor Dairon Asdrubal, a specialist in Neurosurgery, quickly assisted a 32-year-old Bolivian who presented a diagnosis of Acute Epidural Hematoma (bleeding between the inside of the skull and the outer covering of the brain), caused by an accident.

After clinical and imaging tests, Asdrubal decided to carry out surgery to incorporate the patient into society and avoid complications. END_OF_DOCUMENT_TOKEN_TO_BE_REPLACED

#Bolivia, #Bolivia at the UN asked the international community to denounce the blockade imposed on Cuba, #Cuba

United Nations, Oct 31 (PL) Bolivia’s ambassador to the UN, Sacha Llorenti,called on Wednesday the U.S. blockade against Cuba illegal, unjust and immoral and regretted this country”s refusal to end it.
Over 26 years, the international community has almost unanimously reaffirmed the need to end the blockade, however, one of the most powerful countries of the UN, a permanent member of the Security Council, refuses to fulfill the obligations inherent in its participation in our organization, said Sacha Llorenti.

The diplomat denounced that the economic, commercial and financial blockade maintained against the Caribbean nation for almost six decades is illegal because it violates the UN Charter and international law and is unjust because it affects its development, financial and banking operations, foreign trade and industry.

This unilateral policy is also immoral because it impacts on health, food and education, he added.

END_OF_DOCUMENT_TOKEN_TO_BE_REPLACED

BOLIVIA, Oct 19, 2018.- Bolivian Minister of Communication Gisela Lopez condemned the economic, financial and commercial blockade imposed by the United States on Cuba for more than half a century.

More than half a century of punishing a people because, autonomously, they decided to follow another ideological course, is not fair, wrote the minister on his Twitter account.

In another message on that social network, she added that the United States, the ‘owner of the world’, continues to be hostile to Cuba, and demanded an end to that policy.

Cuba considers the blockade is a massive, flagrant and systematic violation of the human rights of the entire people; as well as an act of genocide, in accordance with the Convention for the Prevention and Punishment of the Crime of Genocide of 1948

It is also a violation of the UN Charter and International Law, and an obstacle to international cooperation.

On October 31, the United Nations General Assembly will vote for a twenty-seventh consecutive year a draft resolution calling for the end to the blockade.

END_OF_DOCUMENT_TOKEN_TO_BE_REPLACED 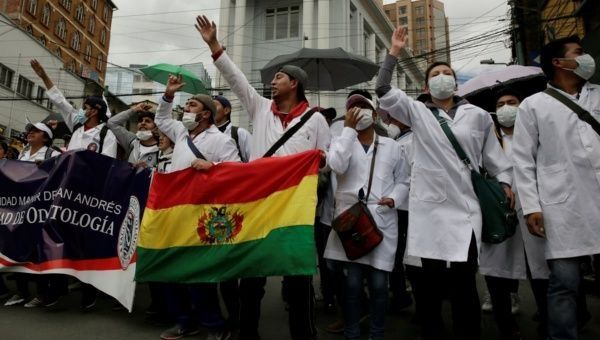 The strike was initiated 46 days ago by the Medical Association of Bolivia.

Bolivia’s President Evo Morales claimed Sunday that the medical professionals maintained the strike started 46 days ago as a “conspiracy” carried out by opposition sectors and grounded on defamation so he would not run for the next presidential elections.

END_OF_DOCUMENT_TOKEN_TO_BE_REPLACED

The Bolivian leader accused Washington of supporting separatism in his country in 2008.

Bolivian President Evo Morales on Monday accused the United States of funding opposition groups with at least US$4 million to destabilize his government.

“According to e-mails, between 2006 and 2009, the United States Agency for International Development (USAID) poured at least four million dollars into separatist movements” in four of the nine regions of the country, said the left-wing leader.

In 2008, authorities of the Santa Cruz, Beni, Pando and Tarija departments, which make up the Media Luna region, carried out referendums in order to form autonomous governments. The referendum organizers, according to Morales, were connected to separatist efforts.

He then noted on his personal Twitter account that Washington had paid this money to the opponents “who have committed terrorist acts in order to divide us (in 2008).”

At the end of 2008, Morales expelled former U.S. Ambassador to Bolivia Philip S. Goldberg as well as all personnel from the Drug Enforcement Agency, DEA, accusing them of conspiring against his government.

The White House had denied these charges and responded by expelling Bolivian Ambassador to the United States Gustavo Guzman.

END_OF_DOCUMENT_TOKEN_TO_BE_REPLACED

Bolivia’s President, Evo Morales, called for greater Latin American integrationin in order to be competitive and resiliant in a tumultuous global economy, according to Prensa Latina.

Morales said that Latin America has an “enormous responsibility” as a region with a wealth of natural resources to integrate economically in order to resist the efforts of dominant global industrialized economies, such as the United States, to gain control over this natural wealth.

Speaking at the opening of new offices of the Financial Fund for the Development of the River Plate Basin, the President accused the United States and other dominant economies of engaging in subversive efforts to provoke internal conflicts in Latin America, using the resulting division as a means of controlling politically and economically.

He said that the only way of overcoming efforts at control and division in order to stand strong in the face of a difficult global economy is regional integration, by working together with “solidarity and complementarity” to solve poverty.

Morales spoke of the uphill battle faced by Bolivia following their decision to nationalize natural resources, as they looked to industrialize and aquire technology and trade with China, North America, Europe, and other regions of the world as an example of the need for regional economic solidarity.

He called for “technological liberation” in the region in order to self-finance, develop, and produce the needed technology to gain full sovereignty over resources.