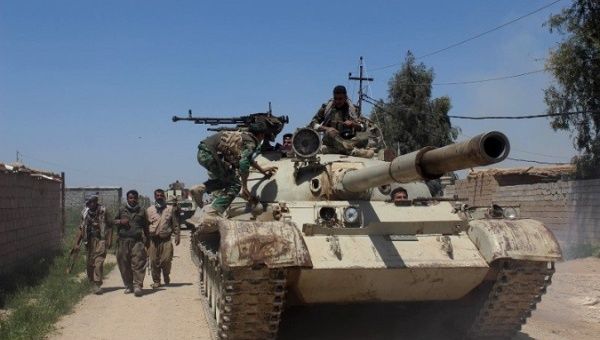 Kirkuk has become center of a clash between Kurdish Peshmerga forces and the Iraqi government´s security forces.

Iraqi and Kurdish officials have reported that Iraqi security forces have launched an operation near Kirkuk, a Kurdish-held region in northeastern Iraq.

END_OF_DOCUMENT_TOKEN_TO_BE_REPLACED

Throughout his campaign, Trump pointed to a 2004 interview where he expressed criticism of the invasion to “prove” that he was against it. But was he?

When U.S. President Donald Trump launched his election campaign in 2015, he branded himself as a “non-interventionist” candidate.

END_OF_DOCUMENT_TOKEN_TO_BE_REPLACED

(Prensa Latina) i said that the operation to free Mosul was in ”its last stage,” while
government troops tighten today the siege of Islamic State (IS) terrorists in that city.

According to the minister, the extremists who are still entrenched in the center of the second city of the country will receive a ‘fair trial,’ if they surrender to the Army, but those who continue to fight against the regular forces ‘will definitely die.’

He asserted that Baghdad government is ‘very careful,’ even with the families of the fundamentalists of the Daesh, Arab name of IS, to which attention is paid, not being like that for the terrorists.

He explained that the number of displaced people due to fights in the second city of the country ‘is still lower than expected’ and should not increase, as the fights are already in the final stage.

UN figures place at least 50,000 residents of Mosul who managed to escape violence in the past month, while the International Organization for Migration says there are more than 80,000.

The Daesh threatened to kill civilians who try to flee, many of whom it uses as human shields, according to local humanitarian organizations.

Troops loyal to Al-Abadi government launched a major offensive in late February to return to western Mosul and expel the Daesh after conquering in January the eastern part of the city that is crossed by Tigris River.

In recent days, the Rapid Response Division of the Ministry of the Interior, the Counterterrorism Service, the federal police and the Army have penetrated from the south and have taken refuge in various neighborhoods, in addition to taking over the deteriorating headquarters building of the provincial government and the museum.