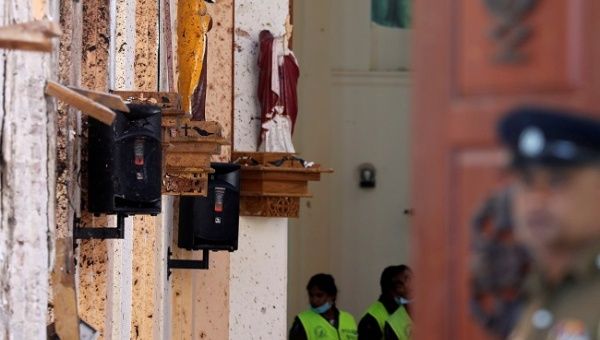 “The van exploded when the bomb defusing unit of the STF (Special Task Force) and air force tried to diffuse the bomb,” the witness said.

An explosion went off on Monday (April 22) in a van near a church in Sri Lanka where scores were killed the previous day, when bomb squad officials were trying to defuse it, a Reuters witness said.

“The van exploded when the bomb defusing unit of the STF (Special Task Force) and air force tried to diffuse the bomb,” the witness said.

The explosion reportedly took place near the St. Anthony’s Church in the capital city of Colombo.

Security force spokesman were not immediately available for comment.

Sri Lankan police found 87 bomb detonators at the main bus station in Colombo on Monday, a spokesman said, a day after suicide bombers attacked churches and hotels killing 290 people and wounding about 500.

The Sri Lankan authorities believe that seven suicide bombers took part in the attacks on churches and luxury hotels, adding that these terrorists were likely part of an international network.

Two of the suicide bombers blew themselves up at the luxury Shangri-La Hotel on Colombo’s seafront, said Ariyananda Welianga, a senior official at the government’s forensic division. The others targeted three churches and two other hotels.

A fourth hotel and a house in a suburb of the capital Colombo were also targeted, but it was not immediately clear how those attacks were carried out.

Still the investigations are going on,” Welianga said.

There was no claim of responsibility for the Easter Sunday attacks, which mainly took place during church services or when hotel guests were sitting down for breakfast buffets.