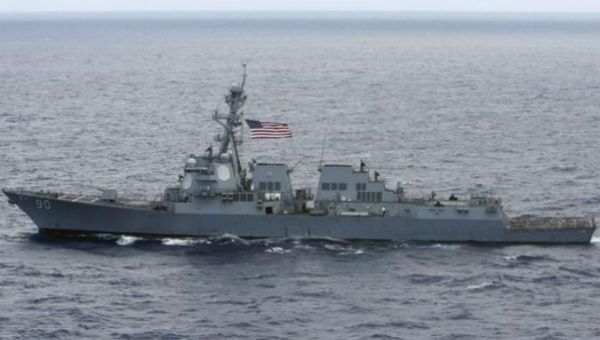 The South Korean Navy has announced that the United States, South Korea and Australia are participating in navy drills in the East China Sea.

The drills, according to the Navy, are aimed at preventing “the import and export of North Korea nuclear weapons and other weapons of mass destruction, and at the implementation of U.N. Security Council resolutions regarding illicit and provocative actions of North Korea.” The exercises will take place for two days, according to Sputnik.

A total of four vessels are participating: two Australian frigates, the Melbourne and the Parramatta, a U.S. Chafee destroyer and a South Korean Sejong destroyer equipped with an Aegis combat system.

The exercises coincide with U.S. President Donald Trump’s trip across Asia. In a speech before U.S. troops based in Japan, Trump claimed that “no dictator, no regime and no nation, should underestimate, ever, American resolve.”

“Every once in a while, in the past, they underestimated us. It was not pleasant for them, was it? It was not pleasant. We will never yield, never waver and never falter in defense of our people, our freedom, and our great American flag.”

END_OF_DOCUMENT_TOKEN_TO_BE_REPLACED

While the U.S. threatened economic and military action against the DPRK, China called on all to “exercise restraint” and avoid “belligerant rhetoric.”

The United States is threatening to use its “considerable military forces”against the Democratic People’s Republic of North Korea, U.S. Ambassador to the United Nations Nikki Haley said at the U.N. Security Council on Wednesday.

The security council session convened to discuss the international response to the DPRK’s launch of a successful ballistic missile test earlier this week, which Haley said “shows that North Korea does not want to be part of a peaceful world.”

Speaking at the session, Haley said that the DPRK’s “actions are quickly closing off the possibility of a diplomatic solution. The United States is prepared to use the full range of our capabilities to defend ourselves and our allies. One of our capabilities lies with our considerable military forces. We will use them if we must.”

END_OF_DOCUMENT_TOKEN_TO_BE_REPLACED

North Korea’s state media published a rare criticism of China on Wednesday, accusing Chinese state media commentaries of undermining its relations with Beijing and worsening current tensions on the peninsula.