Pretoria, (P L) The ruling party of the Zimbabwe African National Union-Patriotic Front (ZANU-PF) on Thursday rejected the possibility of a dialogue with the opposition MCD Alliance, which it accuses of instigating violence that shook the country this week.
According to reports received in Petroria, Monday’s violent actions in Harare and Bulawayo, among other places in Zimbabwe, killed three people, among them a police officer.

Other local publications state that seven people died and about 70 were wounded on Monday’s protests. But the official number of victims is still unknown.

According to the Zimbabwean newspaper The Herald, which was off the air due to an internet blackout, the violence destroyed infrastructures and properties worth thousands of dollars.

END_OF_DOCUMENT_TOKEN_TO_BE_REPLACED

(Prensa Latina) Zimbabwe”s president for almost four decades, 93-year-old Robert Mugabe has resigned shortly before Parliament”s impeachment proceedings, a move that was abandoned after knowing about the nonagenarian”s decision.

END_OF_DOCUMENT_TOKEN_TO_BE_REPLACED 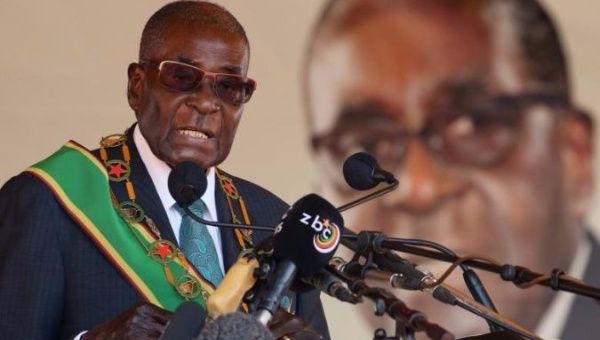 Grace Mugabe has been expelled from the ZANU-PF party as well.

Zimbabwe’s ZANU-PF has removed President Robert Mugabe as head of the party, replacing him with Emmerson Mnangagwa, who had recently been ousted as the country’s vice president. Mugabe remains the president of the country.

RELATED:
What Next for Zimbabwe After Robert Mugabe: Division and Hatred? Or ‘One Love?’

The meeting, held by ZANU-PF’s Central Committee, the highest decision-making body in the party, comes one day after a march of tens of thousands of people, in favor of ousting the long-serving leader. Protesters waved Zimbabwean flags and hoisted placards with slogans like, “Mugabe Must Rest Now,” and “No to a Mugabe Dynasty.”

END_OF_DOCUMENT_TOKEN_TO_BE_REPLACED 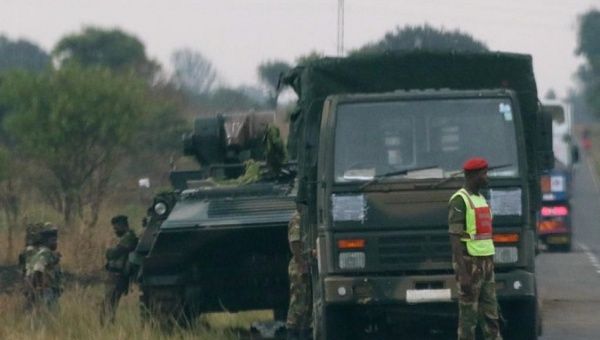 Zimbabwe’s ruling party is reportedly facing an unprecedented mutiny by the head of the armed forces, as troops take up positions in the capital in an escalation of a dispute with 93-year-old President Robert Mugabe.

RELATED:
Fidel: End of Colonialism Would Not Have Been Possible Without the October Revolution

South African President Jacob Zuma, who is reportedly readying an envoy to mediate the situation, said Mugabe is “fine” and urged for “calm and restraint.”

Zuma, who contacted the embattled Mugabe, said the latter was “confined to his home.” The South African leader also contacted the Zimbabwean Defence Force, ZDF, according to a statement cited by the BBC.

According to earlier reports from the capital, Harare, explosions were heard in the streets as troops and armored military vehicles moved throughout the city.

The U.S. embassy reduced its staff due to the “uncertainty” of the country’s climate.

END_OF_DOCUMENT_TOKEN_TO_BE_REPLACED

(Prensa Latina)
Zimbabwe currently has the highest teenage fertility rate in the sub-Saharan Africa, according to a national study.
The research, quoted at a television report, showed that one in 10 girls, aged 15 to 19 years, become pregnant every year, which in some measure this event has been associated to cultural and religious practices.

The African nation has recorded from 500,000 to 700,000 pregnancies annually, and a fifth of them in this age group are a consequence of child marriage, said the report, which also expressed concern about statistics on maternal mortality (about 514 women died in 2016 giving birth, according to official statistics).

A teenager could provide a contribution to her country ‘if she did not get married during her childhood, if she is not forced to drop out school or exposed to an unplanned pregnancy that puts her at high risk for illness,’ Cisse said.

About 20,000 young people under 18 years old are giving birth each day, in developing countries, a figure equivalent to 7.3 million births per year, UNFPA says.

There are 101 adolescent births per 1,000 women in southern Africa, an issue that ‘remains a major challenge worldwide,’ Cisse stressed.

Adolescent pregnancy has been one of the main factors contributing to maternal and infant mortality and to the vicious circle of poor health and poverty, the official said.