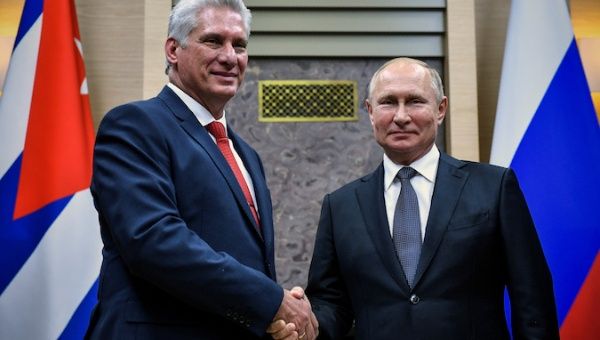 Medvedev visited Havana on Oct. 3-4 where he was received by the ex-president and leader of the ruling Communist Party of Cuba Raul Castro.

Cuban President Miguel Diaz-Canel met with Russian Prime Minister Dmitry Medvedev Tuesday in order to address a series of joint ventures across key areas that will strengthen cooperation between both countries.

“We were able to address many important issues and even formulate many new ideas, which I hope we can develop and promote during your current visit, both during our meeting and during your negotiations with President (Vladimir) Putin,” Medvedev said upon receiving Diaz Canel, who traveled to Russia with a large Cuban delegation.

During the diplomatic visit, the Russian PM and Diaz-Canel penned eight agreements covering key sectors such as economy, investment, transport, customs and culture, among others.

Both governments agreed to strengthen their strategic partnership between private and public sectors in order to support energy, agriculture, technology and digital development projects in Cuba.

Medvedev, who said Tuesday he had good memories of that visit to the island, also congratulated Diaz-Canel for being appointed president of Cuba, and sent greetings to Raul Castro, according to the Interfax and TASS agencies.

END_OF_DOCUMENT_TOKEN_TO_BE_REPLACED

# Activist Gail Walker, # Venceremos Brigade, The Anti-Imperialist Meeting of Solidarity for Democracy and against Neoliberalism

Washington, Oct 30 (P L) U.S. activist Gail Walker considered it important to support Cuba at the Anti-Imperialist Meeting of Solidarity, for Democracy and against Neoliberalism, when Cuba is currently under increasing attack from the U.S. government.
Walker, executive director of the Interreligious Foundation for Community Organization-Pastors for Peace, will participate with other Americans in the event that will take place in Havana from November 1 to 3, with the presence of social movements and progressive forces from around the world.

We know that Cuba is under attack by Donald Trump’s administration, and we believe it is very significant to express our solidarity with him and meet with other members of the island’s community of friends around the world, Walker told Prensa Latina.

According to the activist, the meeting will be an opportunity to continue learning about the impact on Cuba of the U.S. executive’s continued aggressions, and to discuss how people defending the West Indian nation can expand their work.

We know that supporting Cuba means supporting social justice and other causes that we find very close to our hearts,’ added the co-director of the National Network of Solidarity with Cuba in the United States.

We hope to learn more and return strengthened to continue our work, added the activist, who considered it necessary for people from other latitudes to know that within the United States there is a strong movement opposed to Washington’s blockade against Cuba.

Sometimes, when I go to other countries, it’s a surprise for Cuba’s friends at the international level to know how robust the opposition is against that siege here, and how long we’ve been in that confrontation, he added.

END_OF_DOCUMENT_TOKEN_TO_BE_REPLACED

CAIBARIÉN, Villa Clara.— The blockade of Cuba is anachronistic and must cease, said Dr. Matthew W. Martinez, a renowned U.S. cardiologist participating in the International Cardiology Congress, Cardiovilla 2019, which took place in Cayo Santa María, who added that no there should be no barriers to collaboration between Cuban scientists and those of the United States.

Speaking to the press, Martinez, who is a member of the American College of Cardiology and works at the Morristown Medical Center in New Jersey, said that there is much to learn from Cuban medicine, which in addition to being provided free of charge despite financial limitations, manages to do a great deal for the health of the nation’s inhabitants.

“Cuba’s results in the field of Cardiology are fabulous, and should be known by the world scientific community,” Dr. Martinez said, who noted the quality of Cuban specialists who have the ability to serve everyone who needs treatment. END_OF_DOCUMENT_TOKEN_TO_BE_REPLACED

# The Cuban Revolution’s, #Anti-Imperialist Solidarity Conference for Democracy and against Neoliberalism, #Cuba

Anti-Imperialist Solidarity Conference, for Democracy and against Neoliberalism set to take place November 1-3 in the Cuban capital

November 1-3, Havana serves once again as a beacon for the struggles of the peoples of Latin America, when voices are raised in the Convention Center during an Anti-Imperialist Solidarity Conference, for Democracy and against Neoliberalism.

These days will make a real contribution to confronting the current counterrevolutionary offensive of U.S. imperialism, to the search for the broadest possible unity of leftist forces in the region, and to the strengthening of militant solidarity with just causes defended by the peoples.

The necessary articulation between movements, organizations, and groups, whose axes of struggle involve confrontation with imperialism will be the center discussion at the gathering that brings together hundreds of social fighters, political leaders, intellectuals, campesinos, women, indigenous people, solidarity activists, and others.

The Havana conference, with the participation of the Cuban Revolution’s brothers and sisters from many parts of the world, encourages the heroic resistance of the Cuban people, determined to defeat the Helms-Burton Law and the blockade, intent upon advancing the updating of our economic and social development model, as the event’s convocation states. END_OF_DOCUMENT_TOKEN_TO_BE_REPLACED

#Cuba, #Cuba and Russia a relationship that survives time, #Russia and Cuba., Russia

Before returning to the Cuba, President Díaz-Canel met with His Holiness Kirill, Patriarch of Moscow and all of Russia, a fitting culmination to his tour of European countries.

MOSCOW, Russia.— Shortly before leaving for Havana on a morning of fine snow, the President of the Republic of Cuba, Miguel Díaz-Canel Bermúdez, met with His Holiness Kirill, Patriarch of Moscow and all of Russia. “We’re heading back,” he said in a warm greeting, “but could not leave the city without first visiting you.”

After touring the impressive Cathedral of Christ the Savior, one of the largest in the world, Díaz-Canel arrived at Danilov Monastery, the Patriarch’s residence, where Kirill greeted him warmly. END_OF_DOCUMENT_TOKEN_TO_BE_REPLACED

Moscow, Oct 29 (PL) Russian President Vladimir Putin said today he gladly accepts the invitation to visit Cuba, when he met his fellow Caribbean peer, Miguel Díaz-Canel, at the Novoe Ogoriovo residence, in the outskirts of this capital.
Putin congratulated Díaz-Canel for his election as president of Cuba. ‘Last year you made an official visit to this country, but now you do it for the first time as head of state of the Republic of Cuba, as provided by the new Constitution,’ he said.

END_OF_DOCUMENT_TOKEN_TO_BE_REPLACED 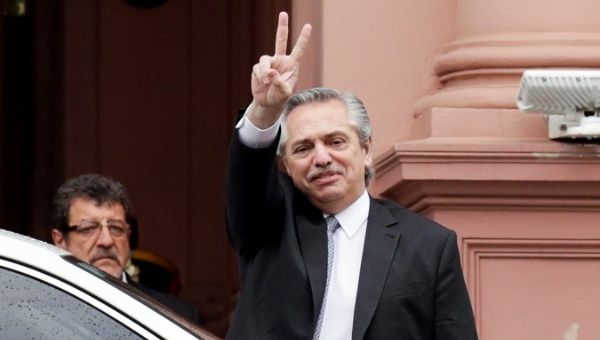 Presidents in Latin America and other parts of the world sent messages of congratulations to the Argentinian president-elect Alberto Fernandez, who will take office in December and expected to turn around the country on a left-wing course in an effort to end the country’s economic crisis and reverse austerity measures introduced by his predecessor Mauricio Macri.

Bolivian President Evo Morales, who had just been re-elected, said he looked forward to working with Alberto asserting that the “sister nations share the struggle for integration and sovereignty.”

President Martín Vizcarra welcomed the election of Alberto Fernández as president of Argentina , during the elections held last Sunday in that country.

“My congratulations to Alberto Fernández for his election as president of the Argentinian Republic,” Vizcarra saidin a tweet. “I wish you success in your management and I invite you to work together to deepen the historical ties of brotherhood between our peoples and advance a development agenda towards the future.”

Mexican President Andrés Manuel López Obrador suggested that he would hold meetings with the Argentinian president-elect and Bolivian President Morales as soon as they begin their new terms.

From his official visit to Russia, the Cuban President Miguel Diaz-Canel also congratulated Fernandez and teh people of Argentina. “Congratulations from #Cuba for Alberto and Cristina. The Argentinian people have defeated neoliberalism,” the president said in a tweet Sunday night.

END_OF_DOCUMENT_TOKEN_TO_BE_REPLACED

Canberra, Oct 28 (PL) The Australia-Cuba Friendship Association (ACFS) issued a statement demanding the immediate lifting of the US blockade against the island, a few days after a resolution was voted in the United Nations.
It is a new one of the active and firm work of solidarity that the ACFS has deployed on Australian soil for more than 40 years, the ambassador of the Caribbean nation here, Ariel Lorenzo, told Prensa Latina today.

The declaration was signed by seven territorial delegations of the Association and was handed over to me by members of their representation in the city of Brisbane, the diplomat said.

The text, he explained, urges the United States government to cease that illegal and genocidal policy and to pay compensation to Cuba for the economic damage it has caused for almost six decades.

He also calls on the Australian government to support actions against the siege of the island through the use of diplomatic channels and pronouncements in international forums, Lorenzo said.

The ambassador pointed out that ACFS’s gestures of solidarity towards his country are systematic.

END_OF_DOCUMENT_TOKEN_TO_BE_REPLACED

Washington, Oct 28 (P L) The Marti Alliance, which is made up of Cuban émigrés in Miami, the United States, on Monday condemned the measures taken by the administration of President Donald Trump against their country of origin.
According to a press release, the organization opposes the latest measure: the suspension of flights by US airlines to Cuba, except the Jose Marti International airport in Havana, starting on December 10.

The decision, announced three days ago, complements a series of aggressive restrictions adopted by the incumbent US administration to roll back the bilateral rapprochement that started in late 2014, during the Barak Obama administration (2009-2017).

According to a communiqué from the Department of State, that action, criticized by several congress people and other prominent figures, is aimed at preventing the Cuban Government from ‘accessing hard currencies from US travelers’.

END_OF_DOCUMENT_TOKEN_TO_BE_REPLACED

Saint Petersburg, Russia, Oct 28 (P L) Cuban President Miguel Diaz-Canel Bermudez met on Monday with the top leader of the Legislative Assembly of Saint Petersburg, Viacheslav Makarov, who repeated his country’s condemnation of the US blockade of the Caribbean island.
Makarov highlighted the Russian’s affection for the Cuban people and called to make emphasis on bequeathing that mutual love between the two peoples to the youngest generations.

For us, Cuba will always be the island of liberty, Makarov noted.