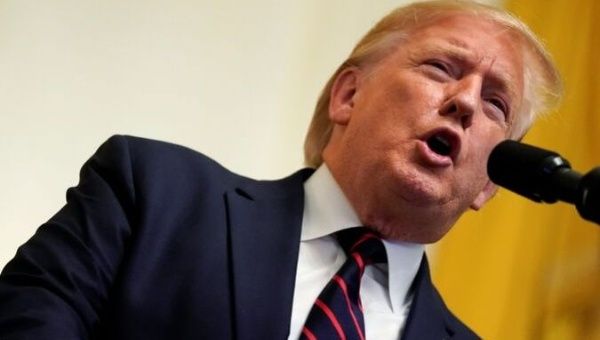 The poll, which was released Sunday morning, found that 55 percent in the U.S. support an impeachment inquiry.

More than half of the people in the United States approve for the House of Representatives to move forward with an official impeachment inquiry of President Donald Trump, according to a new CBS News survey conducted by YouGov.

The poll, which was released Sunday morning, found that 55 percent in the U.S. support an impeachment inquiry, with 35 percent strongly approving and 20 percent somewhat approving the move, with a sample of almost 2,100 adults.

Almost nine in 10 Democrats approve of the inquiry, and two-thirds strongly approve. While most Republicans call his actions proper or, even if improper, still legal as seven in ten believe Trump just did what other presidents have done in the past, according to CBS.

On Sept. 26, Politico/Morning Consult released data which shows that public support for impeachment is now at the highest point of Trump’s presidency, with voters evenly split on the decision.

END_OF_DOCUMENT_TOKEN_TO_BE_REPLACED

United Nations, Sep 28 ( L) Cuban Foreign Minister Bruno Rodriguez on Saturday charged that over the past few months, the United States has implemented criminal and non-conventional measures to hinder fuel supplies to the Caribbean island from several markets. In those actions, Rodriguez noted, Washington has resorted to threats and persecution of the fuel-carrying companies, the governments of registration and flags, shipping enterprises and insurance firms.

As a result, we have faced serious difficulties to guarantee fuel supplies for the country’s daily activities, Rodriguez said at the high-level debate of the United Nations General Assembly.

According to the diplomat, this situation has forced Cuba to take temporary emergency measures that are ‘only possible in an organized country, with a united and friendly people, willing to defend themselves from foreign aggression and to preserve the social justice achieved.’

Rodriguez noted that over the past year, the Government of the United States has increased its hostile actions and blockade against Cuba qualitatively.

‘It has imposed additional obstacles to foreign trade and has increased the persecution of our banking-financial relations with the rest of the world. It has extremely limited travels and any interaction between the two peoples. It hinders ties and contacts of Cubans who live in the United States with their homeland,’ he pointed out.

The head of Cuban diplomacy stated that the economic, commercial and financial blockade imposed nearly 60 years ago continues to be the main obstacle to the country’s development. He pointed out that the illegal Helms-Burton Act, whose Title III was activated by Washington this year, ‘guides the US aggressive conduct against Cuba’. END_OF_DOCUMENT_TOKEN_TO_BE_REPLACED