Colombo, May 14 (Prensa Latina) The refusal of the Sri Lanka Armed Forces to sign a military pact with the United States as a threat to the sovereignty of the country, has repercussions in the local press on Tuesday.
Army commander Lieutenant General Mahesh Senanayake quoted by Ceylon Today news portal, stated that several regional and world powers are trying to take advantage of the geographical location of Sri Lanka for their own benefit.

According to the official, the pact would oblige Sri Lanka to admit U.S. troops into its territory and allow them to be subject to the laws of their country even when they are on the Indian Ocean island.
END_OF_DOCUMENT_TOKEN_TO_BE_REPLACED 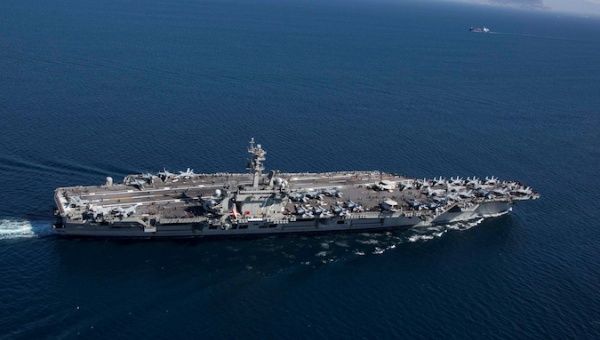 The move marks the latest in a series of moves by President Donald Trump’s administration against Iran in recent weeks.

The United States is deploying a carrier strike group and a bomber task force to the Middle East in a bid to intimidate Iran, U.S. national security adviser John Bolton said on Sunday.

Amid rising tensions between the United States and Iran, Bolton claimed the decision was “in response to a number of troubling and escalatory indications and warnings.”

“The United States is not seeking war with the Iranian regime, but we are fully prepared to respond to any attack, whether by proxy, the Islamic Revolutionary Guard Corps or regular Iranian forces,” Bolton said in a statement.

Washington has said it will stop waivers for countries buying Iranian oil, in an attempt to reduce Iran’s oil exports to zero. It has also blacklisted Iran’s elite Revolutionary Guard Corps.

The Trump administration’s efforts to impose political and economic isolation on Tehran began last year when it unilaterally withdrew from the nuclear deal it and other world powers negotiated with Iran in 2015.

“The United States is deploying the USS Abraham Lincoln Carrier Strike Group and a bomber task force to the U.S. Central Command region to send a clear and unmistakable message to the Iranian regime that any attack on United States interests or on those of our allies will be met with unrelenting force,” Bolton said.

Bolton, who has spearheaded an increasingly hawkish U.S. policy on Iran, did not provide any other details.

A U.S. official said the forces “have been ordered to the region as a deterrence to what has been seen as potential preparations by Iranian forces and its proxies that may indicate possible attacks on U.S. forces in the region.”

END_OF_DOCUMENT_TOKEN_TO_BE_REPLACED 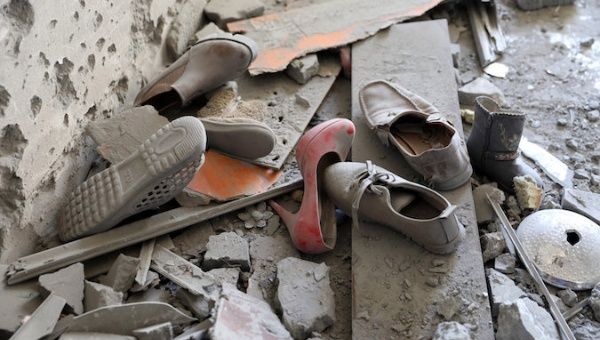 The clashes have displaced more than 18,000 people, according to the latest figures from the United Nations Office for the Coordination of Humanitarian Affairs.

At least 147 people have been killed and 614 wounded in the offensive launched on April 4 by Libyan military strongman Khalifa Haftar to take the capital Tripoli, the World Health Organization said Monday.

Fighting broke out as Haftar’s forces sought to take control of Tripoli from loyalists of the internationally-backed Government of National Accord (GNA) which is based in the capital.

The GNA called for an end to the fighting on Monday and to move to political dialogue with eastern Libyan commander Khalifa Haftar.

In a news conference in Tripoli, Interior Minister, Fathi Bashaga, heavily condemned the bombing of civilian areas, including schools and the latest demolition of a book storage unit carrying books for the upcoming academic year.

With fighting between the two sides entering its second week, Minister of Foreign Affairs, Mohamed Siala, added that LNA troops must depart the capital in order to make way for a political resolution and ceasefire.

The rising number of casualties has prompted the World Health Organization to deploy surgical teams “to support Tripoli-area hospitals as they cope with the influx of trauma cases,” the UN agency wrote on Twitter.

At least eight ambulances have been hit during clashes in the southern outskirts of the capital, as both sides have defied international calls to halt the fighting.

WHO urged “all parties to exercise restraint and avoid causing collateral damage to hospitals, ambulances and health workers.”

END_OF_DOCUMENT_TOKEN_TO_BE_REPLACED

Ramallah, Feb 18 (Prensa Latina) Palestinian activists from Jerusalem called Monday to protest at the Gate of Mercy, one of the entrances to the Al-Aqsa Mosque, Islam”s third holiest place.
Activists called for demonstrations through their social media, one day after Israeli police forces closed the door with iron chains.

Islamic Endowment and Al-Aqsa Affairs Department chief Azzam al-Khatib reported that calls have already been made between the Jordanian government and Israeli authorities to demand removal of the locks.

END_OF_DOCUMENT_TOKEN_TO_BE_REPLACED

Kabul, Jan 21 (Prensa Latina) At least 12 people were killed today, most of them Afghan soldiers, and more than 28 were injured in an attack on an Afghan security force base in the eastern province of Wardak.
The incident was claimed by the Taliban insurgent group that blew up a car bomb outside the camp of the local intelligence services, located 50 kilometres south of Kabul, reported provincial governor Rahman Mangal’s spokesman.

After the explosion, three armed men entered the site and started a gunfight with the soldiers, the spokesman said in statements to the Tolonews network.

The facility was seriously damaged by the blast, added Mangal.

According to local health authorities, the death toll could increase, but they said there were no civilian casualties among the dead.

Four attackers, in addition to the suicide bomber who detonated the explosive at the entrance to the base, were killed in the confrontation, local officials confirmed.

In a statement sent to the Afghan media, Taliban spokesman Zabihullah Mujahid claimed responsibility for the attack and said that ‘several soldiers and special forces officers were killed’ in the shooting.

END_OF_DOCUMENT_TOKEN_TO_BE_REPLACED

Pretoria, (P L) The ruling party of the Zimbabwe African National Union-Patriotic Front (ZANU-PF) on Thursday rejected the possibility of a dialogue with the opposition MCD Alliance, which it accuses of instigating violence that shook the country this week.
According to reports received in Petroria, Monday’s violent actions in Harare and Bulawayo, among other places in Zimbabwe, killed three people, among them a police officer.

Other local publications state that seven people died and about 70 were wounded on Monday’s protests. But the official number of victims is still unknown.

According to the Zimbabwean newspaper The Herald, which was off the air due to an internet blackout, the violence destroyed infrastructures and properties worth thousands of dollars.

END_OF_DOCUMENT_TOKEN_TO_BE_REPLACED

Moscow, Dec 26 (Prensa Latina) Russia has denounced on Wednesday the substantial increase of strategic armaments from the United States and the North Atlantic Treaty Organization (NATO) near its border.
In recent times, the United States and NATO have increased the number of operational actions and combat readiness near the Russian border, said the Commander in Chief of the Russian Navy, Admiral Vladimir Korolyov.

Washington concentrates ships equipped with anti-missile systems (Aegis) and strategic high-precision non-nuclear weapons, as well as military structures in neighboring countries, in the maritime areas near Russia, he said.

END_OF_DOCUMENT_TOKEN_TO_BE_REPLACED

Caracas, Dec 26 (Prensa Latina) Venezuela has reiterated its demand from the U.S. Government to cease its interference in its internal affairs, Deputy Minister of Foreign Affairs, William Castillo, said Wednesday.
After statements issued by the US State Department on Caracas’ sovereign decision in its jurisdictional waters, the official criticized the constant interference of the US Government in national politics.

‘The U.S. must cease its illegal and insolent intervention in Venezuela’s affairs and deal with its own problems,’ the diplomat wrote on Twitter.

Castillo also questioned Robert Palladino spokesman’s statements on the action carried out by the Bolivarian National Navy in response to the incursion of two Guyanese exploration ships into the Venezuelan Orinoco Delta, and described their action as ‘ridiculous’.

‘Palladino is sent by (Michael) Pompeo to make a fool before Christmas by questioning Venezuela’s sovereign and peaceful actions,’ he added while demanding relations of respect from U.S. President Donald Trump.

END_OF_DOCUMENT_TOKEN_TO_BE_REPLACED

Bollsonaro has his eyes on Washington and the Trump administration, which is looking to the Jair-Eduardo pair, father and son, to facilitate its attacks on Cuba and Venezuela

It would be naive to believe that Jair Bolsonaro’s assault on Cuban doctors, forcing their departure from Brazil, is not part of a larger plan, details of which are coming to light, even though he has yet to assume the Presidency.

It is already clear how far he is willing to go with his intrigues against the island that saved the lives of thousands of his compatriots, serving millions with meticulous professionalism.

Bolsonaro has his eyes on Washington and the Trump administration, which is looking to the Jair-Eduardo pair, father and son, to facilitate its campaigns Cuba and Venezuela.

Every day a new link appears, including the effusive meeting of Jair with National Security Adviser John Bolton, where the main theme was Venezuela and Cuba – and not precisely to recognize the achievements of both nations in health, education, labor, and other areas with direct impact on the population, or their proven solidarity.

In Miami, the new President’s son, Eduardo Bolsonaro, held a friendly meeting with Orlando Gutierrez, one of the most rabid representatives of the Cuban-American mafia, linked to terrorists and salaried employees of the USAID. He is the central leader of efforts to oppose even the slightest move to improve relations between Cuba and the United States, as occurred during the Obama administration.

To leave a graphic record of his position during this visit, Eduardo Bolsonaro posed before the cameras with this Cuban-born terrorist.