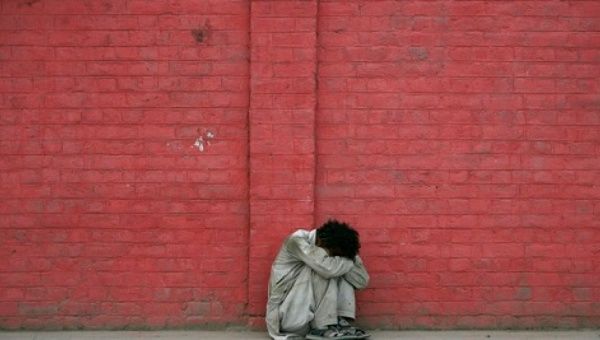 Governments’ potential disposition to invest in vital public services could also be more efficient than “the excessive use of psychotropic medication,” a U.N. expert warns.

Inequality and austerity are exacerbating mental health crisis around the world said a report delivered Monday to the United Nations (U.N.) by Dainius Pūrasa, a Lithuanian psychiatrist and the U.N.’s special rapporteur on health.

“The profound and dynamic cause and effect relationship between mental health and inequalities compellingly suggest that mental health equity may be an especially important marker of social progress,” the report warns.

The U.N. expert said the solution to the increasingly widespread mental health crisis lays in the hands of states, as their social and economic intervention could lessen poverty and economic injustice.

Their potential disposition to invest in vital public services could also be more efficient than “the excessive use of psychotropic medication which is happening,” he explained in an interview with The Guardian.

“Cuts to social welfare, laws and policies that restrict access to sexual and reproductive health information and services, the criminalization of drug possession or cultivation for personal use, laws that restrict civil society space and corporal punishment of children and adults illustrate how governments can directly undermine the promotion of health,” the study points out.

For the experts, promotion and protection of mental health are priority areas, just as every human basic right. They constitute therefore a development priority. However, the exclusive biomedical narrative to explain mental disabilities is too narrowly focused, it negates and puts aside socio-economic situations and de-responsibilizes the states.

Pūrasa highlights that governments thus have the obligation to join in the effort to protect people’s mental health by “creating and sustaining conditions to promote a life of dignity and well being for all.”

END_OF_DOCUMENT_TOKEN_TO_BE_REPLACED

Beijing, Jun 17 (P L) The secretary of the Council of State of Cuba, Homero Acosta, started a visit to China on Monday to explain the experiences resulting from the recent constitutional reform, characterized by its broad participation and democracy.

In an interview with Prensa Latina, Acosta, who is also a member of the Central Committee of the Communist Party of Cuba (PCC), said that at his meetings with local leaders, he will share the experiences gathered in every stage of the process until its conclusion on April 10, when the new Constitution of the Republic was proclaimed.

The Constitution reaffirms Cuba’s socialist character and the PCC’s leading role in society, shows changes in the State’s structure, expands individual rights and guarantees, strengthens the people’s power from the grassroots (municipalities) and recognizes several forms of property, including the private property.

The new Constitution replaced the one approved in 1976. It contains 87 additional articles and nearly seven million Cubans supported it at the polls when they exercised their right to free, direct and secret voting.

Acosta added that he plans to learn about some initiatives implemented in China for several years, because Cuba has changed its institutional design and there are new figures within the higher apparatus of the State.

He expressed great expectations because his stay here is part of the continuity of fluid and permanent bilateral exchanges, and a historic, solid relationship that grows and gets deeper every day.

END_OF_DOCUMENT_TOKEN_TO_BE_REPLACED

Havana, Jun 10 (P L) Cuba”s President Miguel Diaz-Canel has cautioned the Helms-Burton Law threatens peace, solidarity, peaceful coexistence and friendship.
‘It’s a law enacted to neo-colonize and enslave,’ he further wrote in Twitter about Washington’s barring the Peace Boat from docking in Cuban ports, as a result of restrictions recently enforced on US private vessels and planes.

Due to such punitive measures that are hurting the Cuban people, the NGO Peace Boat, with headquarters in Japan, won’t be able to touch Cuban land as it was scheduled next June 13 because the vessel is US property.

END_OF_DOCUMENT_TOKEN_TO_BE_REPLACED

Cuba not only prides itself on having a rate of 8.5 doctors per thousand inhabitants, one of the best in the world, but also having provided the services of 407,000 health professionals in 164 countries on all continents since 1963.

CUBA not only prides itself on having a rate of 8.5 doctors per thousand inhabitants, one of the best in the world, but also because “due to the values of solidarity and humanism that characterize us, from 1963 to the present, 407,000 health professionals have been present in 164 countries on all continents. Currently, there are more than 29,000 in 66 nations,” Cuban Public Health Minister, Dr. José Ángel Portal Miranda, recently noted on speaking at the 72nd session of the World Health Assembly, held in Geneva, Switzerland, May 20 through 28. END_OF_DOCUMENT_TOKEN_TO_BE_REPLACED

Havana, Mar 14 (P.L) Experts from 83 countries will participate in the International Conference Cuba Salud 2018, to be held from April 23rd to 27th at the Havana”s Conference Center, said organizers today. END_OF_DOCUMENT_TOKEN_TO_BE_REPLACED

Abbott signed the bill into law, on May 7, making it mandatory for all the law enforcement to cooperate with immigration officials or face jail time.

A small border town, El Cenizo, in Texas – with an estimated population of nearly 3,500 people – has filed a lawsuit challenging Senate Bill 4 (SB 4). The lawsuit was filed by Luis Vera, an attorney with the League of United Latin American Citizens (LULAC) on behalf of the town, which is 99 percent Latinx. The bill was recently signed into law by Texas Governor Greg Abbott.

END_OF_DOCUMENT_TOKEN_TO_BE_REPLACED

The tribunal found the multinational guilty of a number of environmental and human rights abuses.

The legal findings of a civil society trial on whether Monsanto is guilty of ecocide, subsequently fostering human rights abuses, were delivered in the Hague Tuesday.