Paris, Apr 13 (P L) French scholar and essayist Salim Lamrani described this Monday the US blockade’s continuation against Cuba as irrational, at a time when countries are fighting against the scourge of Covid-19 pandemic.
‘The world is experiencing an unprecedented health tragedy, and instead of federating efforts and acting in a common way against the pandemic, Washington persists in applying an outdated policy towards Cuba, which is suffering, like all nations, the economic impact of the pandemic,’ he noted to Prensa Latina.

Lamrani warned that regardless of the prevailing global scenario due to the spread of the SARS-CoV-2 coronavirus, the US blockade represents a condemnable act from the moral, legal and political points of view.

It is an immoral measure since it affects the most vulnerable sectors of society and constitutes the main obstacle to the country’s development; and it is also illegal because it contravenes the most elementary regulations of Public International Law, which bans all types of coercion aimed at interfering in the internal affairs of a sovereign nation, he set out.

The professor at the University of La Réunion, located in the French overseas department of the same name, also recalled the retroactive and extraterritorial scope of laws such as Torricelli and Helms-Burton, which he considered legal aberrations.
END_OF_DOCUMENT_TOKEN_TO_BE_REPLACED

Paris, Oct 15 (P L) Cuban Ambassador Oscar Leon, speaking on Tuesday before the UNESCO Executive Board, stressed that the Caribbean island will not renounce the socialist project chosen sovereignly by its people, despite increasing hostility on the part of the United States.

‘Nothing and no one will stop the Cuban people’s will to build the socialist society that they have decided to construct exercising their self-determination,’ the diplomat noted, speaking on the second and last day of the general debate of the 207th session of one of the constitutional bodies of the United Nations Educational, Scientific and Cultural Organization (UNESCO).

According to Leon, Cuba will remain on that path and continue to work with those who advocate relations between Havana and Washington based on respect, sovereign equality, collaboration and mutual benefit.

However, he noted that the bilateral situation is increasingly tense, due to the aggressiveness of the current US administration.

‘Since we met in April, the US blockade against Cuba has been tightened,’ Leon explained, who described US policy on Cuba as genocidal.

Leon warned that no sector of Cuban society escapes that hostility, including the fields of concern to UNESCO.

END_OF_DOCUMENT_TOKEN_TO_BE_REPLACED

Paris, Oct 15 (P L) Cuba supported on Tuesday, during the general debate of the UNESCO Executive Board session, a reform of this UN agency that promotes peace to boost education, culture and science.
‘Peace is threatened in several regions of the world. In Latin America and the Caribbean, proclaimed as a Zone of Peace, hostile forces, supported by the leading world power (the United States), act to overthrow legitimately elected governments,’ Cuban representative Oscar Leon warned.

According to the ambassador, ongoing reform of UNESCO is a new opportunity to strengthen its capacity to foster peace through education, science, culture, information and communications.

In that regard, Leon highlighted the call by UNESCO Director-General Audrey Azoulay through the strategic transformation initiative, which should continue the governance process started in 2015. END_OF_DOCUMENT_TOKEN_TO_BE_REPLACED

Paris, Oct 14 (P L) French university professor and activist Jean Ortiz today described the economic, commercial and financial blockade imposed by the United States on Cuba for six decades as immoral and criminal.
In an interview with Prensa Latina, less than a month after the UN General Assembly returns to pronounce on the encirclement, the writer also considered that a violation of human rights of such magnitude and the objective cannot be called otherwise of trying to starve a people.

‘It is inconceivable that such a thing can happen, how the United States can maintain this cruelty against a small country that does not bother anyone’, he said.

According to Ortiz, the blockade exacerbated by the administration of President Donald Trump is not any crime.

‘It is against humanity, of the most important that can be committed, of those who because of their gravity do not prescribe and do not really have qualification’, he added.

END_OF_DOCUMENT_TOKEN_TO_BE_REPLACED

Paris, Apr 8 (Prensa Latina) Leftwing politicians mobilized in France to demand the release of former Brazilian President Luiz Inacio Lula da Silva and denounce his unjust imprisonment, the local press reported Monday.
‘The corrupt are the ones who put Lula in prison’, complained Jean-Luc Melenchon, leader of the France Insumisa movement, in statements quoted by RFI.

He also recalled that LulaÂ´s coming to power in Brazil contributed to important domestic and regional changes, and gave a new impetus to the left.

‘His imprisonment is an insult to democracy’, he said.

For his part, Congressman Eric Coquerel explained that what happened to Lula in Brazil shows the onslaught of the right, driven by U.S. President Donald Trump, aimed at halting the progress made i in the past 20 years in Latin America.

‘If Lula were not in prison, he would be the current President’, he said, referring to the judicial process against him as an attempt to prevent him from returning to office.

END_OF_DOCUMENT_TOKEN_TO_BE_REPLACED 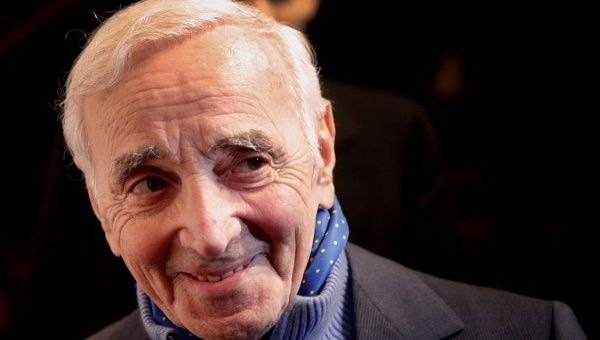 Aznavour began his career being heavily criticized for his unusual quavering vibrato voice and his revolutionary sense of storytelling about sexuality, homosexuality and the trivial details of love relationships, before these features became what the public adored.

The legendary French singer Charles Aznavour has passed away at 94 years old at his home in Alpilles in southeastern France following a concert tour of Japan last month.

He had to cancel several shows last year after breaking his arm in a fall. But as late as Friday the singer told French television that though his Swedish-born wife wanted him to stop, he would happily die on stage. The singer had planned to go back on tour later this month, starting with a concert in Brussels on October 26.

“I always go forward,” said the performer who tried to write a song every day. “There is no backward step with me. “All I can do is live, and I live on stage. I am happy up there, and you can see that,” he added.

Aznavour’s family said that “his legacy will live forever” in a Facebook message in French, English and Armenian.

Multilingual and a tireless traveler, Aznavour was named “Entertainer of the Century” by CNN in 1998 because of his immense global popularity. He pioneered a new, highly emotional way of performing, turning every song into “a one-act play.”

In the English-speaking world he was often dubbed France’s Frank Sinatra, but unlike the American crooner, he wrote his own songs, often breaking taboos about marriage, homosexuality and men talking about their emotions. Bob Dylan also considered Aznavour to be “one of the greatest live performers” he’d ever seen.

END_OF_DOCUMENT_TOKEN_TO_BE_REPLACED

“The AFRICOM serpent has spent more than a decade slithering into almost every African country and establishing a venomous presence.”

Even though Donald Trump thinks Africa is a “shit hole” the continent forced its way into his life anyway in October when four U.S. soldiers were killed in Niger. After Trump deflected blame to others and made a soldier’s widow cry, he apparently returned quickly to his fantasies about boatloads of Norwegian immigrants swarming Ellis Island.

The military establishment was not so quick to change the subject. Their detailed investigation of the Niger matter has produced what is reported to be a damning assessment of the capacity of the U.S. military to carry out its imperialist agenda in Africa. The rest of us aren’t allowed to read it yet because, as the New York Times  York Times explained: “…public release has been delayed until General [Thomas] Waldhauser [head of U.S. Africa Command (AFRICOM)] appears before the Senate Armed Services Committee to present the command’s annual ‘posture hearing,’ scheduled for the last week of February.”

END_OF_DOCUMENT_TOKEN_TO_BE_REPLACED

About 100 French citizens belonging to the terrorist group Islamic State (IS) are arrested in Syria by Kurdish groups, informed today the Minister of Foreign Affairs, Jean-Yves Le Drian. END_OF_DOCUMENT_TOKEN_TO_BE_REPLACED

Legal move is a step towards a trial but investigations can be dropped without proceeding to court.

Prosecutors in France have placed the far-right leader Marine Le Pen  under formal investigation as part of a probe into the alleged misuse of European Union funds to pay parliamentary assistants.

Does France Favor a ‘Frexit’ Like Marine Le Pen?

The 48 year old head of the National Front is being investigated for breach of trust and has denied any wrongdoing.

She says the case is politically motivated.

In a statement, her lawyer said she would launch an appeal.

Under French law, being put under formal investigation means there is “serious or consistent evidence” that points to probable involvement in a crime.

It is a step towards a trial, though investigations can be dropped without proceeding to court.

The case relates to an amount of about US$5.71 million.

The European Parliament believes the money went to National Front employees working for the party in France rather than those working for its lawmakers in Brussels.

END_OF_DOCUMENT_TOKEN_TO_BE_REPLACED

During the 2003 heatwave in France, about 15,000 people died, but the temperatures affected disproportionately the poor suburbs of Paris.

As Paris residents are slowly melting under an unprecedented heat wave that started earlier in June, French mainstream media could not help but take the opportunity to stigmatize suburban youth again who have tried to cope with the unbearable temperatures by opening neighborhood fire hydrants.

ANALYSIS:
What the Forgotten of the French Republic Think Of the Election

“While this practice is indeed dangerous because of the risks of electrocution and of lack of water in case of a fire, the reactions it has sparked demonstrate hypocrisy and a huge classist disdain,” said Paris Luttes Info in a communique issued Saturday.

In recent days, the French media has multiplied news articles criticizing the waste of water and reminding audiences of the needs of firemen, while avoiding to investigate further the reasons motivating the young residents — the majority of immigrant origins — to take risks and open the fire hydrants as a last resort.