A culture of conservation of our historical memory must be created, not only taking action, but also training entities to sustain this work, emphasized the President of the Republic, Miguel Díaz-Canel Bermúdez, in his comments, Wednesday, in the Education, Culture, Science, Technology and Environment Committee, where the program underway to detain the deterioration of the nation’s documentary patrimony was discussed.

The President noted the significant damage suffered by part of the nation’s historical collection archived in different formats, such as sound, film and photography. This is an unresolved issue, he said, because we often lack infrastructure and specialized personnel, making it almost impossible to recover documents in poor condition.

Díaz-Canel also referred to digitization being carried out and mentioned some institutions that, given the value of their collections and their specialization, are playing a leading role in conservation.

The Council of State’s Office of Historical Affairs, the Music Museum, the Office of Documentary Heritage, among others, he noted, have been entrusted with the important task of working with Fidel and Che’s documentary archives, among those of other figures.

END_OF_DOCUMENT_TOKEN_TO_BE_REPLACED 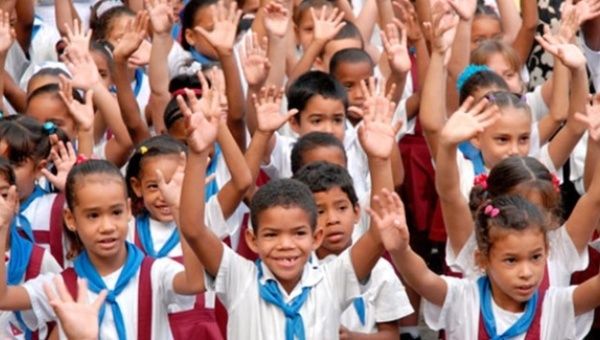 “Cuba is a wonderful country of solidarity, and with a high level of development in quality education, and with a long-standing commitment to solidarity and revolutionary fraternity.”

Cuba’s government has signed cooperation agreements with Nicaragua, which the Sandinista government hopes will help strengthen its education system.  There will be “exchanges” whereby Cuba will visit and share their experiences building a world-class school system.

Nicaragua’s Vice President Rosario Murillo announced Tuesday that Cuba’s Education Minister Ana Elsa Velazquez is visiting the country. The visit comes as the two countries sign accords relating to cooperation in various areas of education, and on the training of Nicaragua’s teaching staff.

State media has reported details of what Cuba’s minister has planned during her visit. She will speak in the towns of Esteli and Matagalpa to conferences of primary school teachers, where she will explain how Cuba has built a quality education system, including the use of “mobile teachers” that are deployed to homes where children are unable to attend their local institution.

Vice President Murillo celebrated the visit, saying; “Cuba is a wonderful country of solidarity, and with a high level of development in quality education, and with a long-standing commitment to solidarity and revolutionary fraternity.”

END_OF_DOCUMENT_TOKEN_TO_BE_REPLACED

More than 255 Cubans are currently working in Jamaica’s essential sectors – including health and education.

RELATED:
500 Ex-FARC Rebels and 500 Colombian Victims to Get Medical Scholarships to Study in Cuba

END_OF_DOCUMENT_TOKEN_TO_BE_REPLACED

I want to punish the men who did this to me,” said Lata, who is part of the first cohort.

A new facility opened up in India — the School of Justice — has an inaugural class of 19 girls, all of whom were formerly trafficked into sex work and will now study toward becoming lawyers in order to fight back against their perpetrators.

The school, which opened on April 6, is a joint project between India’s chapter of the anti-sex trafficking organization Free a Girl, and one of the top law schools in the country.

Lata, who is part of the first cohort, and who was sold to a brothel by her ex-husband shortly after she got married, told Mashable, “Becoming a lawyer is my dream, and bringing justice to those responsible for forced child prostitution is my goal … I want to punish the men who did this to me.”

The inaugural class will see the girls, aged between 19 and 26, take classes to prepare for law exams, and receive tutoring and mentoring. When they graduate, they will receive law degrees, specialized on commercial sexual exploitation cases.

END_OF_DOCUMENT_TOKEN_TO_BE_REPLACED

“A few decades ago we conquered the Moon and were close to reaching other goals. We have succeeded in creating the Internet, we have fast-flying aircraft and, despite this accelerated progression of humanity, we still have children under slavery, “stressed the 2014 KailashSatyarthi Nobel Peace Prize on the second day of Pedagogy 2017. END_OF_DOCUMENT_TOKEN_TO_BE_REPLACED

1959 marked a watershed in Cuban history. Tyranny had left an unsavory legacy across all spheres of society including education: of a population of five and a half million, 23.6% people over the age of 15 were illiterate.

The Moncada Program, referenced by the leader of the Revolution, Fidel Castro Ruz, speaking in his own defense on trial for the attack on the Moncada Garrison, July 26, 1953, highlighted Cuban society’s most pressing problems, including universal access to free education – a feat later achieved by the Revolution. Today Cuba has met teacher coverage and literacy targets for basic education, outlined in the World Conference on Education Action Plan, held in Jontien (Thailand).