Using the U.S. military to stop the Turkish offensive on Kurdish fighters was never an option, defense officials have said.

Early this week, the White House is set to impose economic sanctions on Ankara for its incursion into northern Syria, one of the few levers the United States still has over NATO-ally Turkey.

Using the U.S. military to stop the Turkish offensive on Kurdish fighters was never an option, defense officials have said, and Trump asked the Pentagon on Sunday to begin a “deliberate” withdrawal of all American troops from northern Syria.

After Treasury Secretary Steven Mnuchin said on Friday that the president had authorized “very powerful” new sanctions targeting the Persian nation, the administration appeared ready to start making good on Trump’s threat to obliterate its economy.

On Sunday, U.S mandatary said he was listening to Congress, where Republicans and Democrats are pushing aggressively for sanctions action.

END_OF_DOCUMENT_TOKEN_TO_BE_REPLACED 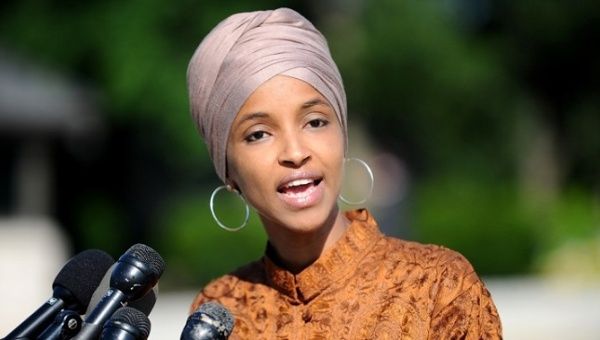 “I think he is terrified at the fact that I sit on the intersectionality of many identities that he really despises: a woman, an immigrant, Muslim, refugee, and Punjabi,” Omar said.

#IStandWithIlhan Goes Viral After ‘Send Her Back’ Chants at Trump Rally

During the late-night show, “Full Frontal with Samantha Bee”, Omar was asked why she thinks Trump focuses more on her than other Democrats.

“I think he is terrified by any women who are practicing ‘Shine Theory,’ who have each other’s back,” Omar said adding, “But for me, I think he is terrified at the fact that I sit on the intersectionality of many identities that he really despises: a woman, an immigrant, Muslim, refugee, and Punjabi in one beautiful package.”

“A lot of people think we take joy in impeaching this president because we don’t like him,” Omar said. “But we take joy in making sure that when we say we’re going to protect the rule of law, that the American people know that we are serious about that.”

U.S. House Speaker Nancy Pelosi announced last Tuesday that the House of Representatives is moving forward with an official impeachment inquiry of Trump.

The controversy came to light after a whistleblower from within the U.S. intelligence community lodged a complaint with an internal watchdog about Trump’s conversation with Ukrainian President Volodymyr Zelenskiy.

END_OF_DOCUMENT_TOKEN_TO_BE_REPLACED 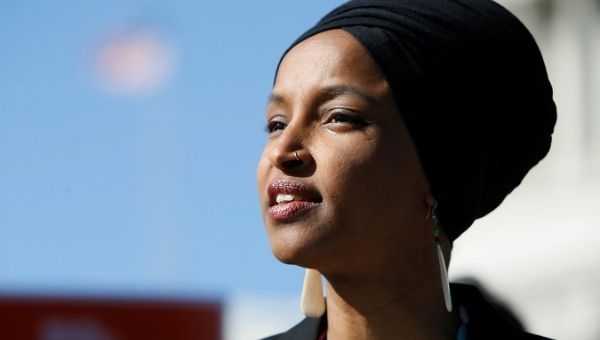 The U.S. president drew sharp rebukes from progressive members of U.S. Congress and key presidential candidates for posting the video.

United States President Donald Trump has come under fire for posting a video on his Twitter linking 9/11 with Congresswoman Ilhan Omar.

The video spliced news footage of 9/11 with a clip from a speech Omar gave last month to Council of American-Islamic Relations, Muslim civil rights, and advocacy group.

Omar said that Muslims had “lived with the discomfort of being a second-class citizen and, frankly, I’m tired of it, and every single Muslim in this country should be tired of it.”

She added, “some people did something and that all of us were starting to lose access to our civil liberties.”

The critics of the president said he took Omar’s words out of context in order to stoke anti-Muslim sentiment.

END_OF_DOCUMENT_TOKEN_TO_BE_REPLACED 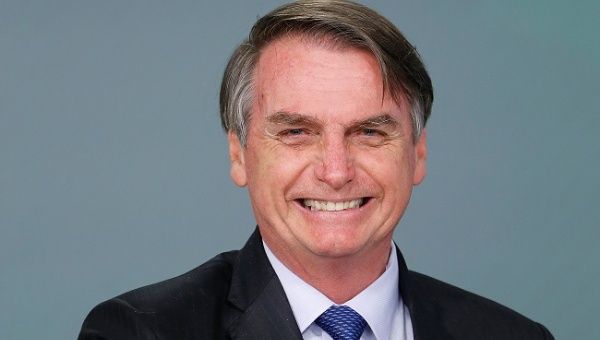 Brazilian President Jair Bolsonaro said Monday he is working with the U.S. government to sow dissent within the Venezuelan Army.

Bolsonaro said on Monday he was working with the U.S. in order to destabilize the Venezuelan Army.

During an interview with Jovem Pan radio, Bolsonaro said that if there is a military invasion in Venezuela, he would seek the counsel of Brazil’s National Defense Council and Congress on what action his country should take.

“We cannot allow Venezuela to become a new Cuba or North Korea,” the right-wing president said.

Bolsonaro added that if any military intervention actually deposed Venezuela’s president, Nicolas Maduro, it is quite likely that the country would see guerrilla warfare waged by Maduro’s diehard backers and whoever took power.

But late on March, Brazilian Defense Minister Fernando Azevedo said that military intervention was “not a hypothesis we’re considering.” He added during a meeting with his American counterpart at the Pentagon that Brazil was looking forward to a peaceful and swift solution to the crisis in Venezuela.

Bolsonaro on Monday fired the education minister from his position because of a range of controversial proposals including a revision of school textbooks to deny the 1964 military coup.

A survey published Sunday by Datafolha revealed that 30 percent of Brazilians believe his government is “bad or terrible,” 32 percent rank it “good or excellent”, and 33 percent say it is “average,” which comes as he will mark his 100th day in office on Wednesday.

END_OF_DOCUMENT_TOKEN_TO_BE_REPLACED 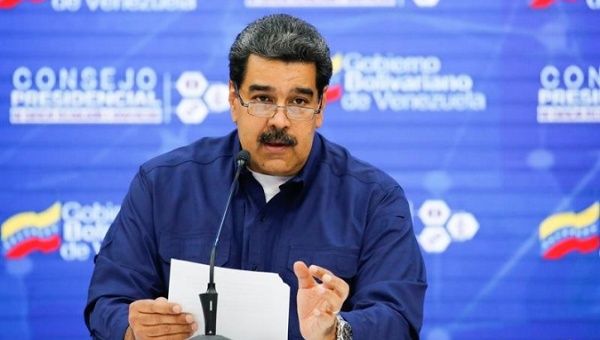 U.S. President Donald Trump’s only thoughts are to stay in the White House and his humanitarian aid is just a show, Venezuelan President Nicolas Maduro said of Trump’s “Nazi-like” speech in Miami, Tuesday.

“What is it that Trump loves from Venezuela? Oil, coltan, diamonds … the worst thing is that there are people from Venezuela who serve as puppets. The humanitarian aid is a show, they rob us US$30 billion dollars and they offer us US$20 million in rotten food,” Maduro said during a televised response just an hour after Trump concluded his speech in Florida.

“Today Donald Trump was in Miami with a tired rhetoric, questioning the right of our free country to adopt the ideas of human, Christian socialism, with an almost Nazi-styled speech to stunt different ideologies,” said Maduro.

Throughout his speech in Miami, President Trump hashly criticized socialism, defining it as an ideology “based on ignorance.”

END_OF_DOCUMENT_TOKEN_TO_BE_REPLACED 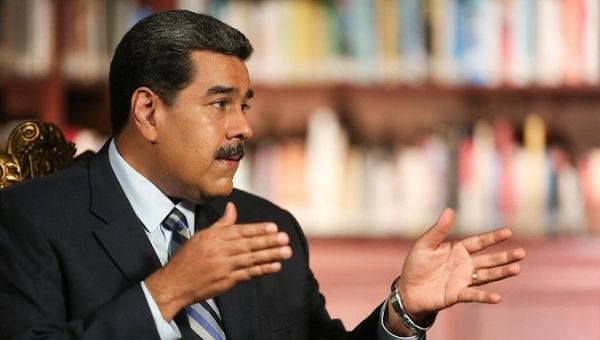 In the interview, the Venezuelan head of state indicated that Arreaza invited Abrams to visit Venezuela “in private, in public, in secret.”

During an interview with The Associated Press (AP) aired Thursday, President Maduro criticized the belligerent position of his U.S. counterpart Donald Trump towards his government, although he said he hopes to hold a meeting with him to resolve in order to resolve the tension created by Trump’s recognition of opposition lawmaker Juan Guaido as “interim president” after he declared himself as such in violation of the country’s laws.

In the interview, the Venezuelan head of state indicated that Arreaza invited Abrams to visit Venezuela “in private, in public, in secret,” without conditions from the Venezuelan side, stressing that his country is open for dialogue with all parties involved in the political standoff in order to avoid any military confrontation or violence.

The last of two meetings took place four days after Abrams claimed that the time had passed to hold a dialogue with the government of President Maduro.

During the interview, the Venezuelan head of state said that there were “indirect” mechanisms for a possible meeting in 2018 with Trump, although this will not come to fruition.

President Maduro said that all “intelligence sources” indicate that Trump is “deceived” about what is happening in the Caribbean country.

END_OF_DOCUMENT_TOKEN_TO_BE_REPLACED

United Nations, Oct 23 (P L) The United States blockade against Cuba has today generalizesd opposition in the world and also inside the U.S., highlights a press release of the Cuban mission to the United Nations.
Since April, 2017 until March, 2018, U.S. citizens of diverse social origins have protested that policy, intensified under the present administration of the White House, stresses the text.

Groups such as Engage Cuba and CubaNow, aimed at promoting bilateral relations and the lifting of the siege, kept up their work and diversified their range of action.

For example, says the press release, they reached several sectors of U.S. society such as farming, cultural, business and also managed to obtain support from the executive and legislative sectors of the government, both at federal and state levels.

Engage Cuba, together with the company MorningConsult, published the results of a national survey related to Cuba, which shows that most voters registered as republicans supports lifting commercial restrictions and travel to the Island.

The enquiry revealed the support of most U.S. citizens to maintain bilateral relations.

Also, a survey of the Florida Atlantic University (FAU) showed that only 34 percent of the residents there support the new policy of U.S. President, Donald Trump.

END_OF_DOCUMENT_TOKEN_TO_BE_REPLACED 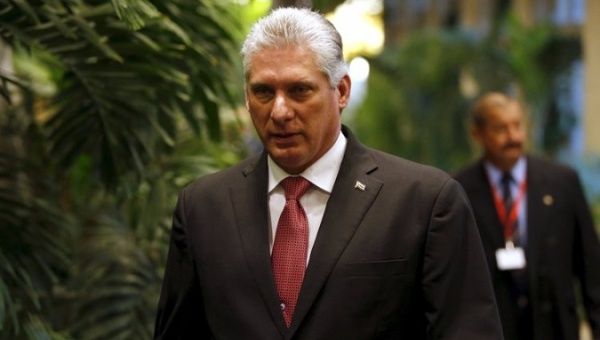 The recently inaugurated Cuban president praised art as a way of building bridges.

Cuban President, Miguel Diaz-Canel, does not believe that the current hostile attitude of the United States toward Cuba can last forever, and believes that they can find the “will” and “points of contact” to move forward from a position of respect.

END_OF_DOCUMENT_TOKEN_TO_BE_REPLACED 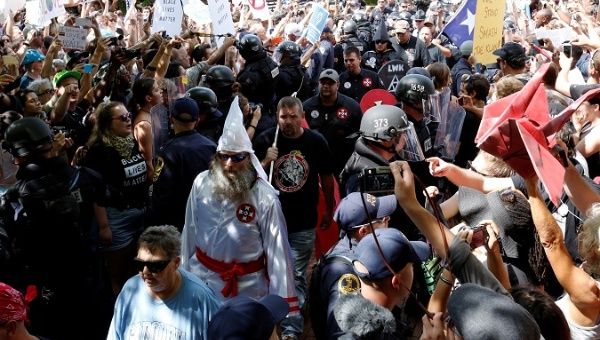 The number of U.S. hate groups increased for the third year in a row, theSouthern Poverty Law Center said Wednesday, warning that neo-Nazi andwhite supremacist groups saw the most expansion last year under the presidency of Donald Trump, who is seen as sympathetic and tolerant towards their actions.

END_OF_DOCUMENT_TOKEN_TO_BE_REPLACED

Cuba ratified its policy of zero tolerance for human trafficking during a meeting on the issue with U.S. authorities, the island”s ministry of foreign ministry stated today.