Havana, Dec 8 (P L) President Miguel Diaz-Canel on Sunday highlighted the sovereign and dignified policy of the Caribbean nations with respect to Cuba, on the 47th anniversary of those ties.
Today, December 8, we celebrate 47 years of Cuba-CARICOM relations. The small Caribbean nations, with their sovereign and dignified policy, were pioneers in establishing relations with Cuba when the empire demanded isolating us, the president posted on Twitter.

END_OF_DOCUMENT_TOKEN_TO_BE_REPLACED

Washington, Nov 19 (P L) Five new hotels were included on the controversial list of banned Cuban companies and institutions for US citizens by the government of President Donald Trump.

US Secretary of State Mike Pompeo said last Friday that the list, first published in November 2017 as part of the Trump administration’s measures to limit Cuba’s trade and US citizens’ travel, would be updated again.

As of Tuesday, and as has happened with more than 200 Cuban companies and institutions, US citizens are banned from undertaking direct financial transactions with the Gran Hotel Bristol Kempinski, in Havana; and Grand Aston Varadero Resort, at the world famous coastal resort in Matanzas province.

END_OF_DOCUMENT_TOKEN_TO_BE_REPLACED

Since he took office in January 2017, Donald Trump has been erasing the path towards the normalisation of relations between Cuba and the United States outlined by his predecessor Barak Obama. Instead of dialogue and cooperation, his government has promoted hostility and confrontation against our nation.

Last April 17, the current administration announced its decision to escalate even more the aggressive behavior against Cuba. The new unilateral sanctions include allowing hereinafter that action is taken in US courts against Cuban and foreign entities outside the jurisdiction of the United States; and to harden the impediments for entry into the US of the executives of companies that legally invest in Cuba and their relatives in properties that were nationalised.

Likewise, remittances which Cuban residents in the US send to their families and next of kin will be limited; trips by US citizens to Cuba will be further restricted; and additional financial sanctions will be applied against our country.

Those sanctions reinforce the blockade, flagrantly violate international law and directly attack the sovereignty and interests of third countries. The declared goal is to suffocate the Cuban economy, in order to achieve a “regime change”.

Washington intends to justify these measures by accusing Cuba of being responsible for the current situation in Venezuela, and a threat to the national security of the United States. False!

The current US government is known, in its own country and internationally, for its unscrupulous tendency of using lies as a resort in domestic and foreign policy matters.

The accuser has a GDP 200 times greater than that of our country, its territory multiplied by 89 that of the Island and its population is 30 times larger. It is also the only country in the world that keeps over 250 000 soldiers on 800 military bases abroad.

The US Department of State recently sent a secret memo to its embassies, instructing them to take steps in the capitals with the aim of obtaining public condemnation of the alleged presence of thousands of Cuban troops and security forces in Venezuela, influencing and determining what is happening in that sister country. It is another vulgar slander.

Cuba does not have troops or military forces, nor does it participate in operations in Venezuela. The nearly 20 thousand Cuban collaborators in that Latin American sister nation, more than 60% of them women, fulfill the same tasks that are currently performed by 11,000 other professionals of our country in 83 nations: contributing to provide basic social services, mainly health care.

It’s just ridiculous that the US accuse Cuba of being responsible for the soundness and steadfastness shown by the Bolivarian government and the people of Venezuela, in defense of the sovereignty of their nation.

END_OF_DOCUMENT_TOKEN_TO_BE_REPLACED

In statements to the press on Wednesday afternoon, the Cuban Foreign Ministry’s Deputy Director for the United States, Johana Tablada, reiterated that “Cuba does not participate with military troops or personnel in military operations in Venezuela”.

“There are no Cuban troops in Venezuela. There are no security forces from Cuba in Venezuela. Cuba does not participate with military troops or personnel in military operations in Venezuela. These falsehoods constitute an affront to the people of Cuba, the government of Cuba, the people of Venezuela, and the international community, sovereign states and the U.S. people who deserve to know the truth,” reiterated the Cuban Foreign Ministry’s Deputy Director for the United States, Johana Tablada, in statements offered to the press this Wednesday, May 1.

Tablada stressed that in recent weeks the Cuban government has denounced a series of accusations, falsehoods and slander regarding the nature of the cooperative relationship between Cuba and Venezuela, headed by “a pathological liar, former ambassador John Bolton, who has a long history of conflicts with the truth,” and today is National Security Advisor to the U.S. government.

She recalled that Bolton lied about the existence of chemical weapons in Iraq, and of biological weapons in Cuba in 2002, lies that cost him his appointment as U.S. ambassador to the United Nations, following a Senate Foreign Relations Committee hearing, which led to his own party voting against him and recommending that he be prevented from returning to public office at such a high level.

END_OF_DOCUMENT_TOKEN_TO_BE_REPLACED

Havana, May 2 (P L) Cuba has no troops, nor security personnel in Venezuela, the US Government lies again to the world, the Cuban Foreign Ministry has asserted.
These slanders are an insult for the Cuban and Venezuelan people and a disrespect to the public opinion, the international community, sovereign States and the American people that deserve to know the truth, Deputy Director of the United States Office of the Cuban Foreign Ministry, Johana Tablada, told a press briefing.

The true reason behind such false allegations rests on the US Government’s intent to hide the failure of its aggressive policy against Venezuela for the past years, stressed Tablada.

Such lie is also linked to Washington’s needs of concealing the failure of the second coup attempt in the past hours against the legitimate and constitutional government of Venezuela led by President Nicolas Maduro.

END_OF_DOCUMENT_TOKEN_TO_BE_REPLACED

United Nations, May 1 (P L) Cuba”s Alternate Representative to the United Nations, Ana Silvia Rodriguez, has denounced the hardening of Washignton”s blockade on the island by the entry into force of extraterritorial laws.
The Trump administration announced on April 17 that as part of the blockade Washington has maintained for 57 years, it will habilitate on May 2 Titles III and IV of the Helms-Burton Law, the Ambassador recalled.

Since the Helms-Burton was signed by then president William Clinton, Washington has made great efforts to universalized the economic hostility against Cuba by exerting brutal and illegal pressures and sanctions on third nations, their governments and companies, Rodriguez told an assembly of the Non Aligned Movement on Tuesday.

END_OF_DOCUMENT_TOKEN_TO_BE_REPLACED

Washington, April  (P L) Cuban emigration organizations in the U.S. city of Miami on Monday sent a letter to Pope Francisco asking the U.S. government to cease its policies against Cuba.
It is our fervent wish that, given your moral authority recognized by all, Christian or not, you bring your good offices before the administration of President Donald Trump in order to avoid greater suffering to the Cuban people, the letter points out.

Remember that in the days of last Holy Week, Cubans were lacerated by the new measures of economic aggression dictated by Washington.

Five days ago, National Security Advisor John Bolton announced in Miami, among other steps, that the sending of remittances to Cuba will be limited (to a maximum of one thousand dollars every three months) and U.S. travel to Cuba will be further restricted.

Also on April 17, Secretary of State Mike Pompeo announced that beginning May 2, his nation will fully implement Title III of the Helms-Burton Act.

END_OF_DOCUMENT_TOKEN_TO_BE_REPLACED 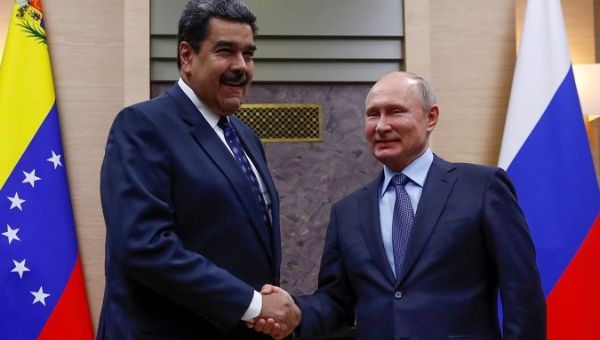 During the XIV High Level Business Commission Forum in Moscow, Russia, representatives of the Venezuelan and Russian government are working on new ways to circumvent a U.S. imposed blockade which is seeking to isolate Venezuela both, financially and economically.

The Venezuelan Vicepresident for the Ministry of Planning, Ricardo Menendez, stressed that this event is folded to break blockade schemes imposed on Venezuela and also strengthen a new development model to invigorate the economic and strategic relationship between both nations.

Menendez pointed out that Venezuela plans to adopt a cooperation mechanisms between Russia and Venezuela, in order to establish new strategies for importing food supplies, as well as general products for consumption.

“Along with President Nicolas Maduro and  the Vice President of the Economic Sector, Tareck Aissami, we’ve been working and distributing a scheme as part of the reorganization of the productive and economic system of Venezuela. This includes the reorganization of the countries from which we import supplies. This means that we will change our suppliers from the international markets,” he added.

END_OF_DOCUMENT_TOKEN_TO_BE_REPLACED

Argentina, ”As long as the United States continues attacking the Cuban people as if the Cold War continued, it will be attacking the right of all peoples to peace, sovereignty and development,” Nobel Prize winner Adolfo Perez Esquivel stressed in Buenos Aires.

In a letter sent to UN Secretary General, Antonio Guterres, to which Prensa Latina had access, the prominent Argentine human right activist described this genocidal policy imposed almost 60 years ago on the island as ‘a war against a country that seeks peace.’

Some few days before the UN votes on the draft resolution against the need to put an end to the economic, commercial and financial blockade imposed by the United States on the island, the Nobel Peace Prize winner stressed that despite the restoration of relations between the two countries, the U.S. financial persecution to Cuban transactions abroad remains in force.

END_OF_DOCUMENT_TOKEN_TO_BE_REPLACED

DENMARK, October 12, 2018.- The Cuban ambassador in Denmark, Yiliam Gómez Sardiñas, held a meeting with the Deputy speaker and member of the Presidium of the Danish Parliament Christian Juhl, who conveyed his support to Cuba in the struggle against the illegal blockade imposed by the United States government.

The diplomat handed him a copy of the Cuba’s report that includes the main effects caused by this genocidal policy on the Cuban people and expressed that the next voting on the Cuban resolution about the economic, commercial and financial blockade of the United States against the Island will take place on October 31 at the United Nations. In addition, the ambassador provided a broad explanation concerning the popular consultation process is being undertaken in Cuba for constitutional reform.