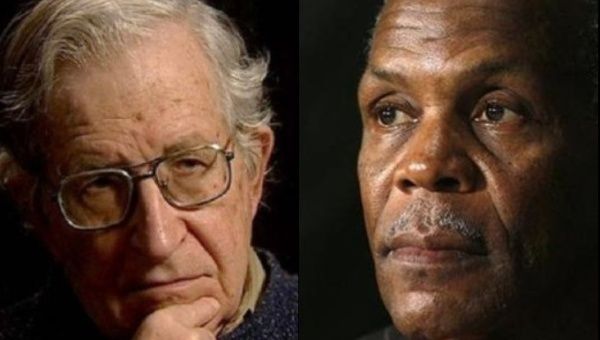 “It is no secret that Venezuela is targeted for regime change” due to Venezuela’s leadership in resisting U.S. hegemony, the activists argued.

Scholar Noam Chomsky and actor Danny Glover are among a group of over154 activists who have condemned the sanctions imposed on Venezuela by the United States and Canada. In an open letter to Washington and Ottawa, the activists argued sanctions affected the poor and negatively impacted any chance of political reconciliation.

“We are deeply concerned by the use of illegal sanctions, whose effect falls most heavily on the poorest and most marginal sectors of society, to coerce political and economic change in a sister democracy,” the letter reads.

Economic and financial sanctions on Venezuela arejustified by its supporters as necessary measures to end the alleged corruption and human rights abuses of what they call a dictatorial regime.

However, Venezuelans have participated in a long list of local and national elections since Hugo Chavez was democratically elected in 1999. The right-wing opposition has won at least two of these elections. Several opposition groups have also agreed to participate in new presidential and legislative elections on May 20.

Although opposition candidates will participate, the high-profile Democratic Unity Roundtable has decided to abstain in an attempt to boycott the electoral process.

The activists have urged both the U.S. and Canadian governments to reconsider these measures arguing they also “complicate efforts by the Vatican, Dominican Republic, and other international actors to mediate a resolution to the deep polarization in Venezuela.”

The Venezuelan government and the right-wing opposition engaged in talks held in the Dominican Republic to reach a peaceful resolution to their political difference, but as they were about to sign an agreement supported by the host country and former Spanish president Jose Luis Rodriguez Zapatero, the opposition-backed out and failed to sign.

The decision to abandon talks coincided with U.S. Secretary of State Rex Tillerson’s South American Tour, in which he called for an oil embargo and hinted at a military coup in Venezuela.

The letter also highlighted the hypocrisy in U.S. foreign policy. “It is no secret that Venezuela — unlike Mexico, Honduras, Colombia, Egypt, or Saudi Arabia — is targeted for regime change by the U.S. precisely because of Venezuela’s leadership in resisting U.S. hegemony and the imposition of the neo-liberal model in Latin America,” the activists expressed.

Several governments including Antigua and Barduba, Ecuador, Dominica, Cuba, Uruguay, and Bolivia have also expressed their opposition to isolating Venezuela and excluding them from the Summit of the Americas, which are scheduled to be held in Lima, Peru in April.