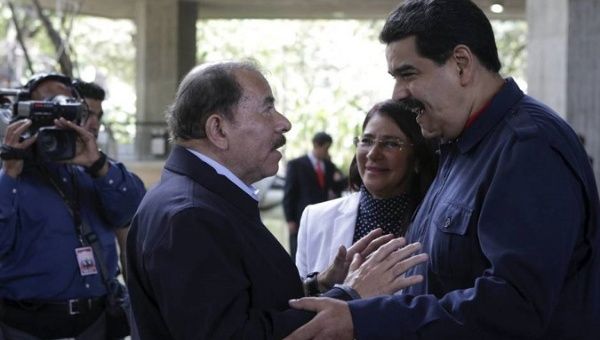 “We hope that these obstacles can be overcome, those vetoes that are being applied to Venezuela by closing the space to participate in a table where all the countries of our America will be,” Nicaraguan President Ortega said Wednesday during an event in Managua.

“Precisely if there is a problem is when you have to get to that table, to those places, because it is the place where you can talk about these issues and find a solution.”

His comments come a week after Peru announced it was withdrawing the invitation for Venezuelan President Nicolas Maduro to attend the summit, a decision backed by the twelve countries of the so-called Lima Group and the United States.

“Now they have taken the decision to exclude Venezuela from that meeting, that does not make sense, it does not have logic and it breaks away from the principle of respect for the charter of the United Nations and all international norms,” Ortega stressed during the event commemorating the 84th anniversary of the assassination of Nicaraguan anti-imperialist hero Augusto César Sandino.

The Nicaraguan leader further argued that regional summits are spaces that allow “for dealing with issues that can distance us” and thus preventing assistance to a nation is “going back to the times of intolerance in political and ideological terms.”

“This is not good logically for the region, we hope that this veto being done to Venezuela can be overcome,” added Ortega, an ally of the Venezuelan socialist government.

A day earlier the Ecuadorean government also rejected the exclusion of President Maduro from the summit, calling the decision an interference into Venezuela’s internal affairs and slamming the United States and others over supporting a military coup and intervention into the Caribbean country.

The governments of Cuba, Uruguay, and Bolivia have already expressed their opposition to excluding Venezuelan from the summit.