Opponents of the referendum say the proposed reforms are a step toward greater authoritarianism in the country.

Turkish President Tayyip Erdogan claimed victory Sunday in the country’s hotly contested referendum that is set to place extraordinary powers in the hands of the president, heralding the most radical change to the country’s political system in its modern history.

The race was tight with nearly all votes counted after polls closed, with votes in favor of Turkish constitutional changes that could give Erdogan sweeping new powers stood at 51.3 percent.

Turkey’s three largest cities and the mainly Kurdish southeast looked set to vote “No,” and the country’s opposition vowed to challenge the results.

Turkey’s state-run news agency reported that nearly all ballots in the country had been opened, but noted that a lag between opening and vote counting could tighten the margin between “Yes” and “No” camps even further.

According to presidential sources reported by Reuters, Erdogan said the result of the referendum was clear and called Prime Minister Binali Yildirim to congratulate him after his nationalist MHP party supported a “Yes” vote.

Ahead of the vote, opinion polls have given a narrow lead for a “Yes” vote, which would result in replacing Turkey’s parliamentary democracy with an presidency and could see Erdogan in office until at least 2029.

According to Turkey’s state-run news agency, two people died as a result of a fight that took place outside a polling station in the southeastern province of Diyarbakir. The Anadolu news agency said a quarrel between two families turned deadly, but the reason for the fight remains unknown. However, the Dogan news agency reported that “differences in political opinion” was the cause of the squabble. One person remains hospitalized, and two others have been detained in the incident.

President Recep Tayyip Erdogan cast his ballot in Istanbul without incident. “We have held referendums before. But this referendum is now about a new administrative system for the Republic of Turkey, it’s a choice for change and transformation. We need to make a decision that is beyond the ordinary,” he said after voting. “I believe in my nation’s democratic common sense.”

Kemal Kilicdaroglu, the leader of Turkey’s main opposition party and a campaigner for the “No” vote in the referendum, cast his ballot in the capital Ankara. “We are voting for Turkey’s fate today,” he said, before adding: “we hope the results will be good and together we can have the opportunity to discuss Turkey’s other fundamental problems.”

An hour earlier, Turkey’s Prime Minister Binali Yildirim cast his vote in the western province of Izmir. He commented that the outcome of the referendum is for the nation to decide. “Whatever the result is, we will hold it in high esteem. The decision of our nation is the most beautiful decision.” The crowd in the polling station chanted, “Turkey is proud of you.”

Turkish Foreign Minister Mevlut Cavusoglu lashed out at foreign influences as he cast his vote in the southern province of Antalya. He said some “from abroad” had ”tried to tell the Turkish nation what to do. They took sides but today the decision belongs to our nation.”

Observers from the 57-nation Organization for Security and Co-operation in Europe monitored the voting process in the Turkish capital. Head of the OSCE, Tana de Zulueta, said observers visited polling stations in 12 locations to complete its referendum assessment mission. The group, which has been harshly criticized by Erdogan, is expected to hold a news conference on Monday to reveal their preliminary findings and conclusions.

The outcome of the referendum will also shape Turkey’s strained relations with the European Union. The NATO member state has controversially curbed the flow of migrants — mainly refugees from wars in Syria and Iraq — into the bloc, but Erdogan says he may review the deal after the vote.

Some 55 million people were eligible to vote at 167,140 polling stations across the nation, which opened at 7:00 a.m. local time in the east of the country. Turkish voters abroad cast their ballots ahead of Sunday’s vote.

The referendum has bitterly divided the nation. Erdogan and his supporters say the changes are needed to amend the current constitution, written by generals following a 1980 military coup, confront the security and political challenges Turkey faces and avoid the fragile coalition governments of the past.

Opponents say it is a step toward greater authoritarianism in a countrywhere around 40,000 people have been arrested and 120,000 sacked or suspended from their jobs in a crackdown following a failed coup last July, drawing widespread criticism from rights groups.

The Communist Party of Turkey, known as TKP, released a statement Saturday blasting the referendum, saying the “proposed reforms reflect certain intentions of the country’s bourgeoisie to claim a better position for the Turkish capital in the inter-imperialist competitions and plans which are taking place in eastern Mediterranean and the Middle East.” 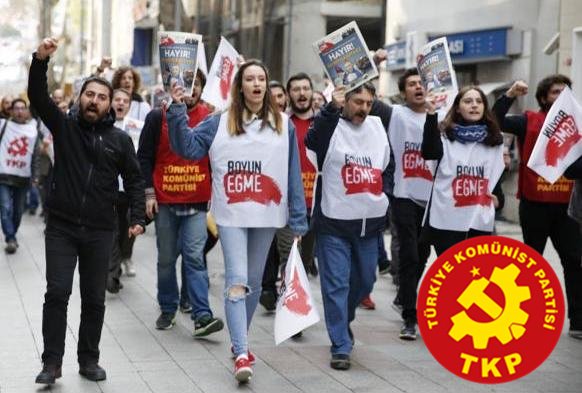